Accessibility links
The Derring-Do Of Donald Duck: Recolored. Restored. Really Great. A new collection of Carl Barks' Donald Duck stories sheds fresh light on why so many consider him one of the greatest comics creators of all time. 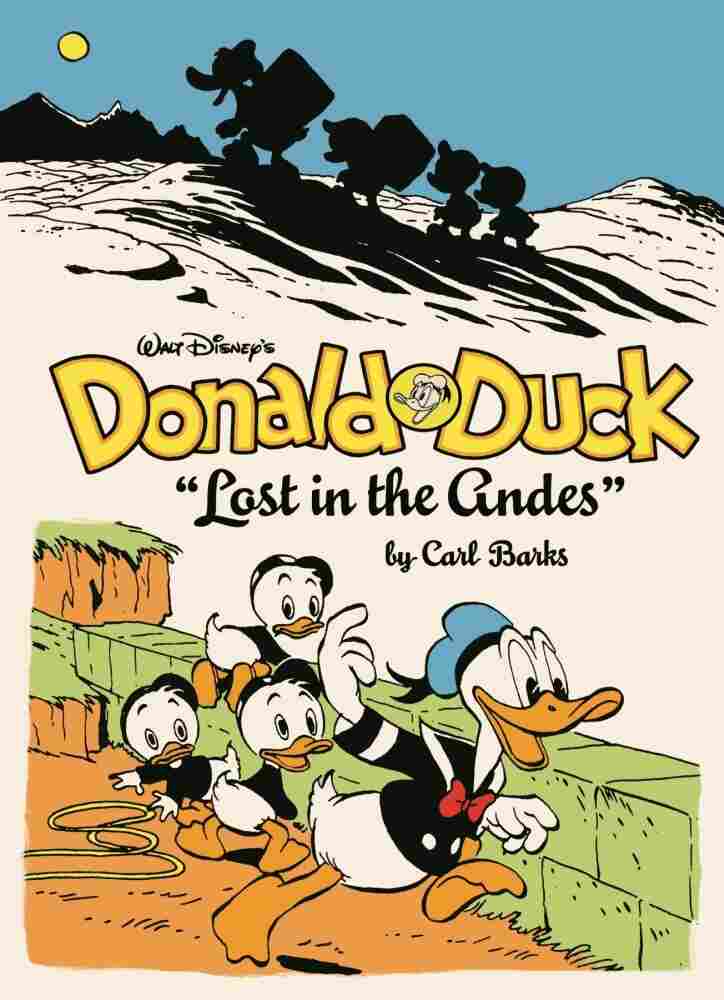 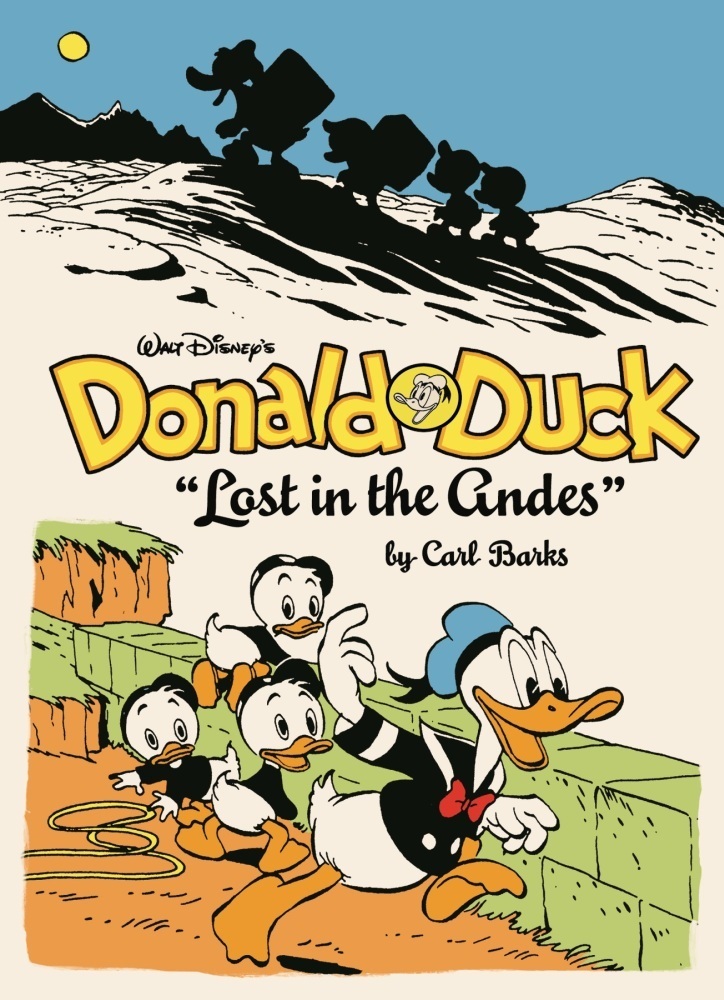 Carl Barks began writing and drawing Donald Duck comic books in 1942. For nearly the next 30 years, the Disney Studio ceded a remarkable degree of control to Barks as he feverishly cranked out everything from single-page gag strips to epic, free-wheeling adventure stories; invented characters like Scrooge McDuck and Gyro Gearloose; and constructed the town of Duckburg to house them all.

It was and remains highly unusual for the white-gloved, four-fingered editorial hand of Disney to allow its creators such autonomy, but comic books weren't exactly the studio's highest priority. And Barks was a special case.

Many comics of the time read like radio scripts, with art that simply recapitulated what a character was saying or thinking ("Great Scott! That odd green meteor! It's falling out of the sky and heading toward Metropolis terrifically fast!"). This grew in part from the division of labor between writer and artist.

Barks, on the other hand, did it all — story, pencils, inks, even lettering his own dialogue — and had an eye for the page and panel layouts that would best serve his story and characterizations. (The Donald of Barks' stories was just as hot-headed as the silver screen version, but a good deal more intelligent and, ultimately, compassionate.)

As a result, his art didn't simply illustrate information his characters said, it consistently met the dialogue at oblique angles to either enhance or (in many cases) humorously undercut it. 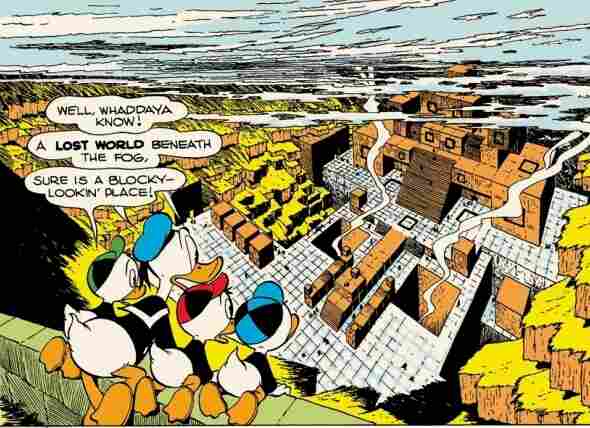 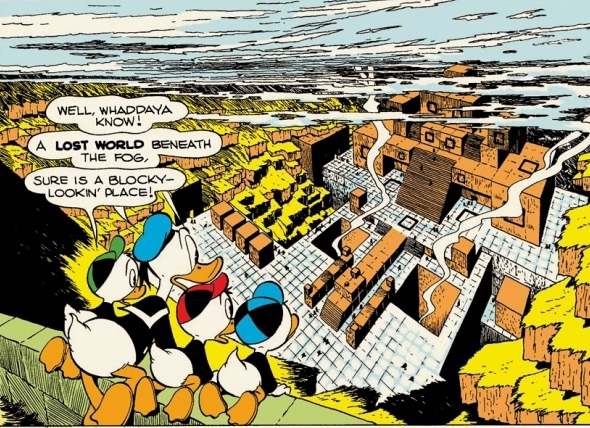 That's one reason Barks' panels can feel so light and crisp when considered individually, while his stories move with such narrative fluidity.

A Definitive Depiction of Duckery

Barks' duck stories have been reprinted several times over the years, in different formats of varying quality. Now, Fantagraphics has published the first volume of its new series of hardcover reprints (Walt Disney's Donald Duck: Lost in the Andes), and there's much to be heartened by.

For one thing, the reproduction is fantastic — instead of relying on muddy copies of muddy copies, the publisher worked from the original art (some of which has only recently been found) and recolored everything with care so Barks' bright, primary-colored worlds pop off the page as they were meant to.

The publisher has also made a volume that fits the average bookshelf. Don't get me wrong, I like a great honkin' (heh) tome of comic art as much as the next nerd, but this book is sized to be read and enjoyed, not set on a coffee table, track-lit and admired from afar. (The standard size also helps keep the cost down; the $25 cover price seems just right.)

Happily, the publishers have decided to forgo the strict archival impulse that would demand they reproduce all of Barks' tales chronologically. Instead, they've opted to highlight work from a few years into his run (1948-1950), just as he began to hit his creative stride. (In fact, the collection's title story, which finds Donald and his nephews headed to Peru to search for the square chickens that lay square eggs, is an all-time favorite of both fan and creator alike.)

The collection includes 30-page adventure epics, 10-page stories about the denizens of Duckburg, and a collection of single-page gag strips. As much as I love the longer works like Lost in the Andes and The Golden Christmas Tree (in which a witch hatches a plan to destroy all the Christmas trees in the world by harvesting the nephews' tears(!)), my favorite is a more modest,10-page masterpiece of narrative escalation, "Managing the Eco System."

NEPHEW: "Where you going, Unca' Donald?"

DONALD: "To the park to practice making echoes! I'm giving a talk about them to the Nature Boys' Picnic today!"

Well, sure. Why not?

What follows is a back-and-forth between Donald and his nephews. Donald makes a noise, the boys imitate it. Donald realizes they're faking the echo, and resolves to make weirder and weirder noises to catch them out. The boys know that Donald knows, but they find themselves locked in a battle of wills that ratchets up steadily, inexorably, to climax at the Nature Boys' Annual Picnic ("Bring Your Own Roots and Herbs," a banner reads).

Even the silliest premise, when executed by an artist in perfect control of his gifts, can land with deftness and grace - that's something that strikes you again and again as you read Barks' work. And it's a lesson that won't get lost on any kid with whom you might choose to share it, which is convenient, as this collection makes a perfect introduction to one of the greatest all-ages comics artists of all time.