Accessibility links
Online Video Sites Go Pro And Get Original Move over, cute kittens and goofy kiddos: YouTube is pouring money into slick, professional channels, including one that works with Madonna. Streaming services are developing their own original programing — including a resurrected, Netflix-only season of Arrested Development. It's like the early days of cable TV, when HBO started out airing movies and ended up with The Sopranos. 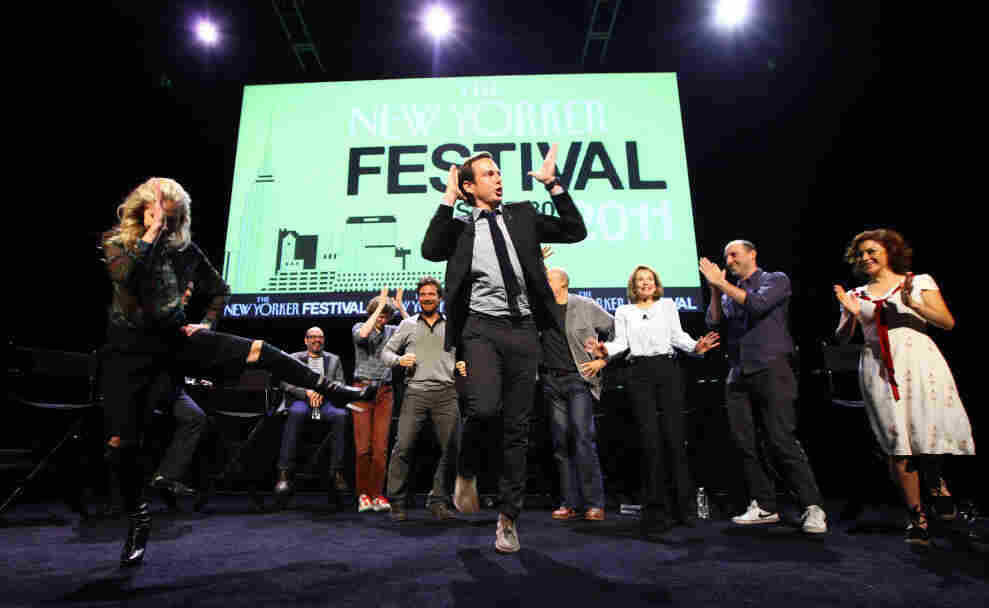 Cast members of the canceled sitcom Arrested Development reunite at a New Yorker panel in October. Netflix will exclusively stream a new season of the cult hit — and that could bring the service a lot of new subscribers, one analyst says. Neilson Barnard/Getty Images for The New Yorker hide caption

The online videos Americans watch are about to change. Up to this point, it's been a lot of amateur videos on YouTube and old movies and TV shows on Netflix and Hulu. But all three services are now starting to feature their own professionally made videos, featuring big names like Kevin Spacey, Deepak Chopra and Madonna.

For a very long time — about two years — the No. 1 video on YouTube was a home video called "Charlie bit my finger." The video, capturing a big brother's delightfully histrionic reaction to his little brother biting his finger, has attracted more than 390 million views.

But in the past year, Charlie was knocked off YouTube's Top 5 list, and now there's another baby on top: Justin Bieber's "Baby" is the most-watched video, with more than 666 million views.

Bieber is followed by a list of pros: Jennifer Lopez, Lady Gaga and Eminem. Alex Carloss, global head of original programming at YouTube, says there's a growing appetite for videos produced by professionals. "In the last several years, thanks to many different types of video sites, consumer demand has grown for more and more different types of content on the Web," Carloss says.

The Machinima channel on YouTube started out with user-submitted videos for video game-lovers. But Warner Entertainment recently produced an original series for the channel about the backstory of Mortal Kombat characters — which attracted 5 million views in its first five days of release.

DanceOn's show JustDance bills itself as "Your source for the latest dance news in mainstream media." YouTube is putting its own funding into the channel, which also gets content advice from Madonna.

'A Slew Of New Networks'

Take the Machinima channel on YouTube: It's geared toward video game lovers, and many contribute their own content. But this spring Warner Entertainment stepped in and produced a live-action series with professional actors, based on the game Mortal Kombat.

The series helps explain the motivations of characters in the game, like Sonya Blade and Major Jackson "Jax" Briggs. The first episode of Mortal Kombat had 5 million views in its first five days of release — as good as a show on the USA or TNT cable networks could hope for.

This fall, YouTube announced that it would spend its own money on channels with professional content. Along with some financing from YouTube, a channel called DanceOn will also be getting content advice from Madonna. Amanda Taylor, the channel's CEO and founder, thinks she is part of the evolution of media.

"Networks started on the radio and then they moved to television, and then cable came about, and then hundreds more networks arrived," Taylor says. "And now I think we're going to see a slew of new networks that are being born on YouTube and other digital platforms."

YouTube is laying the groundwork for these new channels with a complete redesign of its home page. The new look incorporates a social element so that in a world of endless channels, people can find what interests them with help from friends.

'New Player In This Ecosystem'

Two other major websites for video, Hulu and Netflix, are also buying their own shows. Steve Swasey from Netflix says the service has the exclusive rights to House of Cards, staring Kevin Spacey. "We think this is going to be of great interest to Netflix members," Swasey says.

He says it's the kind of content that might have been on HBO, Starz, Showtime or one of the other premium cable channels before. "Well, now Netflix is a new player in this ecosystem," Swasey says.

It's like in the early days of cable TV: HBO started out airing movies after they left the theater and eventually started producing its own shows like The Sopranos.

The reason Hulu, Netflix and YouTube are now commissioning their own content is because the studio system is probably not all that keen for any of these players to succeed.

Venture capitalist Mark Suster notes that Netflix has also bought exclusive rights to a new season of Arrested Development, a sitcom that was canceled by Fox in 2006. "[There] was a ... wildly popular cult following of people who watched it when it was on television, and Netflix is going to resurrect it — and I bet a lot of subscribers are going to come with it," he says.

Suster, who invests in Internet video startups, says if Netflix and Hulu are going to survive they will have to have exclusive content.

"The reason Hulu, Netflix and YouTube are now commissioning their own content is because the studio system is probably not all that keen for any of these players to succeed," he says.

The old guard — TV networks and film studios — haven't been looking forward to the day when they will have to compete against an endless number of online channels, Suster says. But he also believes that day may have arrived.