Accessibility links
Obama Pushes Agenda Despite Losses On The Hill On Thursday, a bid to extend the payroll tax cut failed in the Senate, and Republicans blocked the president's nominee to head a new financial watchdog agency. But the White House is still convinced President Obama is winning the broader political argument. 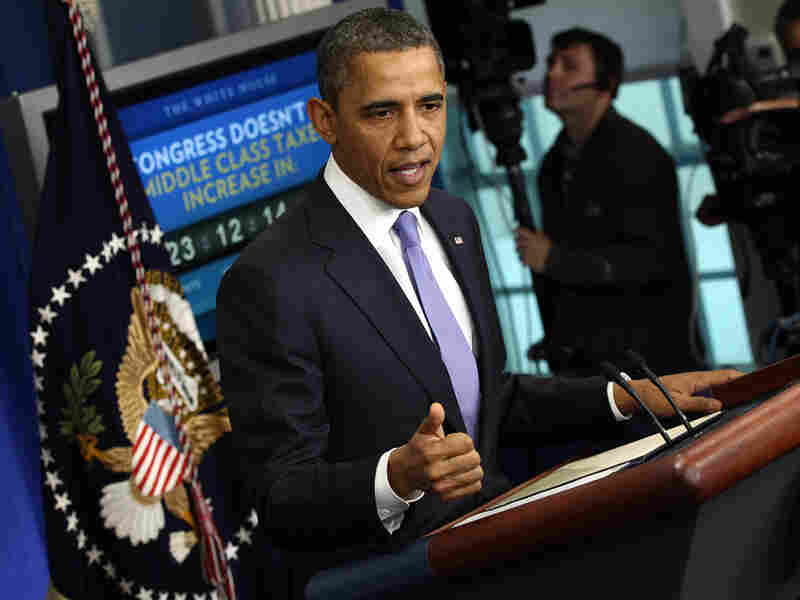 President Obama addresses the media Thursday, with an electronic clock counting down to the end of the year. The payroll tax cut is due to expire then, unless Congress votes to extend it. Win McNamee/Getty Images hide caption 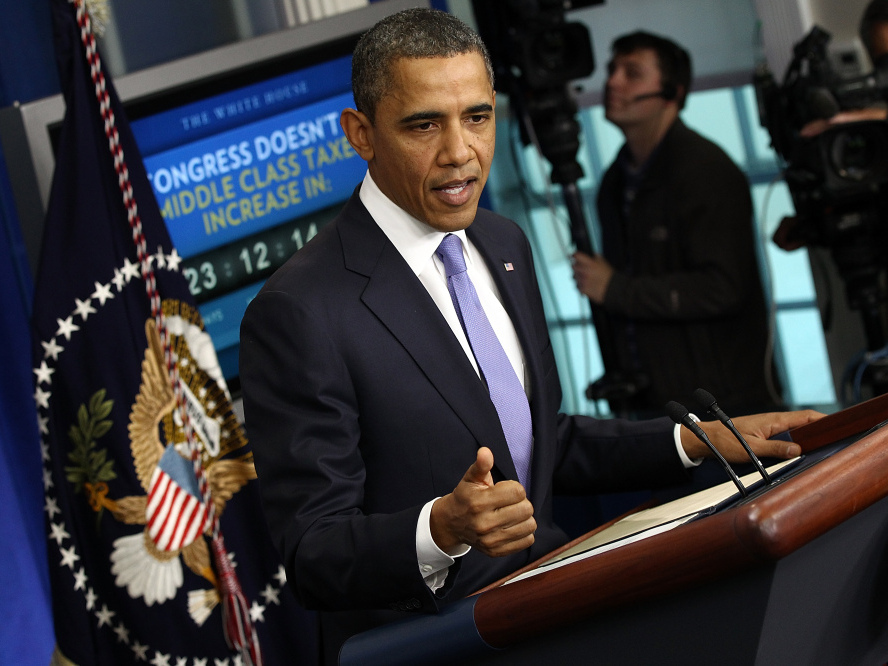 President Obama addresses the media Thursday, with an electronic clock counting down to the end of the year. The payroll tax cut is due to expire then, unless Congress votes to extend it.

President Obama lost a couple of economic battles on Capitol Hill on Thursday, but he is hoping to win the political war. The president vows to keep fighting for policies he says will benefit the broad middle class.

As Obama spoke to reporters in the White House briefing room, an electronic clock behind him ticked down the minutes, hours and days until year's end. That's when a payroll tax cut is due to expire, unless Congress votes to extend it.

While dueling proposals to extend the tax cut failed in the Senate on Thursday, Obama insists lawmakers keep trying as they face their own countdown to a Christmas holiday recess.

"I do not expect Congress to go home unless the payroll tax cut is extended and unless unemployment insurance is extended. It would be wrong for families, but it would also be wrong for the economy as a whole," he said.

The president also promised to keep pressing to fill the top job at a new financial watchdog agency, even if he has to use a recess appointment to do so. Senate Republicans blocked his nominee Thursday. Obama says that until a director is in place at the agency, it can't police payday lenders, debt collectors or mortgage companies that aren't tied to banks.

"This is a big deal. About one in five people use these kinds of mechanisms to finance everything from buying a house to cashing their checks," he said.

So far, Obama has been losing these battles on Capitol Hill, but the White House is convinced he's winning the broader political argument. Day after day, the president tries to present himself as a champion of the middle class, while branding Republicans as the party of fat cats and financiers.

Overruling The FDA On Plan B

While Obama has grown more combative in his economic rhetoric, the administration has tried to tiptoe through other political minefields. This week, Health and Human Services Secretary Kathleen Sebelius overruled scientists at the FDA who wanted to make emergency contraceptive pills more readily available.

Obama insists he did not try to influence the secretary, but he defended her decision not to allow over-the-counter sales of Plan B pills to adolescent girls without a prescription.

"She could not be confident that a 10-year-old or an 11-year-old going into a drugstore should be able — alongside bubblegum or batteries — be able to buy a medication that potentially, if not used properly, could end up having an adverse effect," he said.

One area where Obama shows surprising strength in the public opinion surveys — for a Democrat — is foreign policy. That hasn't stopped Republican presidential hopefuls from criticizing his handling of Iran or Israel. This week, several Republicans accused the president of practicing "appeasement." Obama had a blunt comeback for that.

"Ask Osama bin Laden and the 22 out of 30 top al-Qaida leaders who've been taken off the field whether I engage in appeasement," he said.

White House spokesman Jay Carney also took a club to Mitt Romney's charge that Obama spends too much time on the golf course or planning a family vacation when he should be fixing the economy.

"I don't remember Gov. Romney complaining about this president's predecessor taking his family on vacation, spending, I believe, far more time on vacation than this president," Carney said. "But you never know what he might have said. So you might want to go check it."

In any case, Obama volunteered to skip his family trip to Hawaii this month if Congress doesn't act quickly to extend the payroll tax cut.

The countdown clocks are still ticking.

Obama In No Appeasing Mood As He Goes After Republicans Dec. 8, 2011