Accessibility links
'We The People': Reconstituting The Constitution That's the question scholar Christopher Phillips is asking in theoretical discussions at schools and cafes across the country. You can add your own amendment to the discussion. 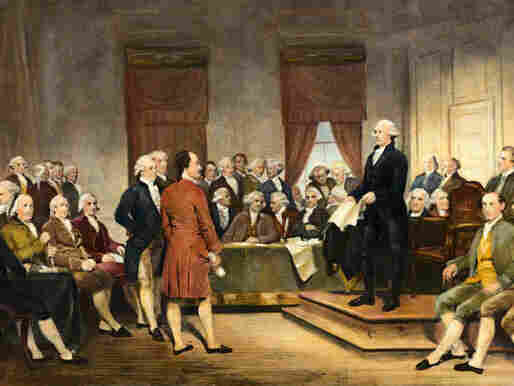 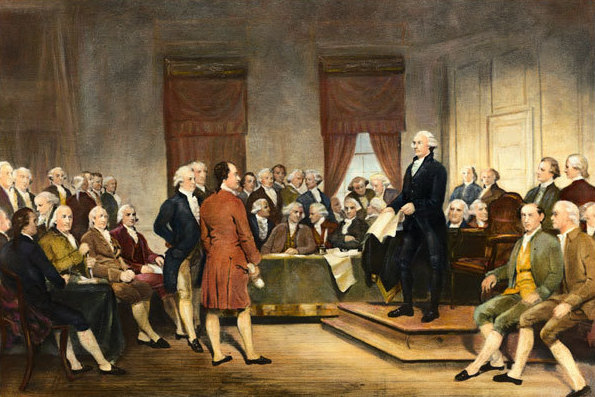 Most Americans haven't read the U.S. Constitution in a long time, if ever. They may be able to tell you about the Second Amendment, or the Fifth, maybe even part of the First. But other than that? A lot of blank stares.

Christopher Phillips has been leading what he calls "Constitution Café" discussions with people across the country. He's asking Americans to imagine themselves as framers of our founding document.

The idea of traveling coast to coast to discuss philosophical topics with Americans is not new to Phillips.

Before this reconstituting-the-Constitution tour, the author and scholar conducted a similar exercise, traveling to different states and asking Socratic questions: What is knowledge? What is beauty? What is love?

He led these discussions in schools, parks, homeless shelters and even prisons. Then he wrote about them in three separate books.

Write Your Own Amendment

Always wanted to be a Constitutional framer? Add your own amendment in the comments section at the bottom of this piece. We will collect some of the most popular suggestions and let you vote on whether to "ratify" them the week of Dec. 12. 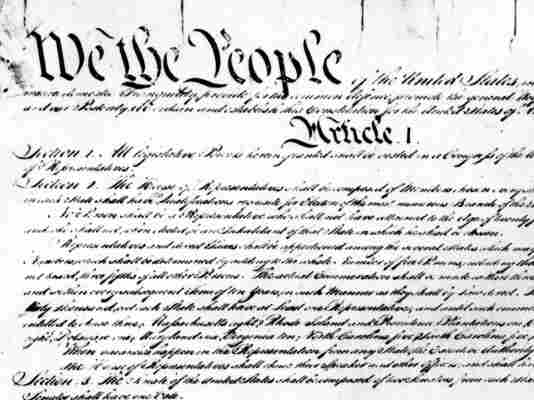 Who exactly is included in the preamble's "We The People" anyhow? ASSOCIATED PRESS hide caption 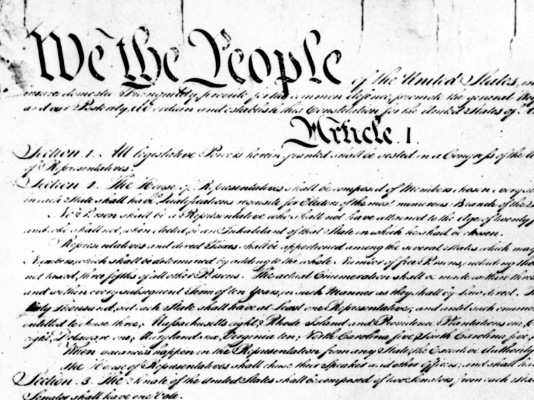 Who exactly is included in the preamble's "We The People" anyhow?

Now, he's turned to one of his heroes — Thomas Jefferson — who believed, Phillips says, that Americans should revisit the Constitution every 20 years and rewrite it from scratch.

"His argument was that if Americans weren't vital stakeholders in that foundational document, they would become distanced from governance itself," Phillips explains. "And the politicians from the president on down would become 'like wolves.' "

For several months, Phillips has been asking people to imagine themselves in the role of Constitutional framers. Would we change some things if we could? Or would we leave them the same? He asks people to look over something in the document and rewrite it as an exercise.

At Constitution High School in Philadelphia, a public magnet school, his assignment is the beginning: Students look at the preamble and write their own version.

"How many of you kept the first three words, 'We the People?'" Phillips asks the diverse class of high school juniors. "Should we make sure who we are talking about when we say 'We the People?' "

"'We the People' is just based on everybody," replies Mai Nuygen.

"When this Constitution was approved, 'We the People' only included white, landowning, tax-paying males," Phillips tells the class, then asks, "How many of you believe we might want to clarify who we are talking about?"

After pausing for a response, he notes, "a lot of you."

"I think we should put in 'the citizens of the United States,' " says 11th grader Maria Diaz.

"How many of you would like to add — off the top of your head — 'the citizens of the United States?' " asks Phillips.

"Immigrants are people too," Shane Duson replies. "If you leave it to just the citizens of the United States, then they lose all their rights."

"I think it should only apply to the people who were born here," says Brian Cornell. "I think that our say is more powerful because it is our country."

Phillips then tells the class that, until the 1920s, white, male, tax-paying, property-holding immigrants who were not U.S. citizens could vote in federal elections.

If you live in this country and you help promote the general welfare, as the preamble states, then you are a citizen.

One student suggests that "We the People" should be everyone who pays taxes. But another student points out that he has a job and pays taxes, but he's too young to vote.

Then another student offers up a utopian view. "If you live in this country and you help promote the general welfare, as the preamble states, then you are a citizen," says Jonathan Vargas.

Phillips observes that Vargas has a very different notion of who is a citizen — not simply someone born on U.S. soil, or someone who comes to the U.S. and goes through the various hoops to become a citizen.

"What Jonathan is saying is that a citizen is someone who participates in public life and contributes actively to our democracy," explains Phillips.

Soon the students are discussing Robert Heinlein's libertarian science fiction novel Starship Troopers, which makes a distinction between a citizen and a civilian. A citizen has to help make the democracy work.

Taking The Debate To The Streets

Phillips says he is trying to spark a long-overdue conversation about the Constitution.

One of the reasons Americans don't read it, says Phillips, is "because they feel so far removed from the corridors of governance. One manifestation of that is the Tea Party; another is the Occupy Wall Street movement."

Phillips has brought members of MoveOn.org and the Tea Party together to discuss the Constitution. And he is not above simply collaring random people on the street.

After his interview at NPR's office, Phillips came across some Occupy protesters marching down the street. He asked two of them whether there was something they would change in the Constitution.

One, Mark Greif, wants a new amendment that would restrict the Bill of Rights to living human beings.

'Is It Time For A New Constitution?'

A poll conducted by the Center for the Constitution, which helped inspire Phillips to start his questioning tour, found that while 86 percent of those surveyed thought the Constitution was important in their everyday lives, only a third of those respondents had actually ever read the document in its entirety.

"So tell me what language you would use," Phillips says.

"I imagine it would say, 'The rights enumerated in the Constitution are applicable only to living natural citizens of the United States, not to fictitious persons or non-existent persons,'" says Greif.

Greif was clearly against the idea that corporations are people from a free speech point of view — a reference to last year's controversial Supreme Court decision, Citizens United.

But nearby, in the same group of Occupy marchers, another man said he wanted to leave the Constitution just the way it is.

"I think we should just look at what it actually says in the Constitution. That would be a good start. I am not looking to change it," said the demonstrator, who called himself Seaman Surley.

Phillips has written a book about his latest travels, Constitution Café: Jefferson's Brew for a True Revolution. He believes that ordinary people can have uncommon insights about the nation's founding document — sometimes better than the experts.

But, he says, "you do have to model a kind of thoughtful and reasonable discourse in which shrillness and intolerance is a no-no. You have to willingly and even enthusiastically consider a wide range of objections and alternatives to your own viewpoint.

"That is a practice that is not being cultivated in any of the chambers of power" in Washington today, he adds. "At the very least, Constitution Café is trying to inculcate this habit again."