Accessibility links
Latinos Get Little Thanks For Rebuilding New Orleans Workers who helped reconstruct New Orleans after Katrina are putting down roots in the city. The construction jobs aren't as easy to get as they once were, and many immigrants report that employers sometimes don't pay them for their work. 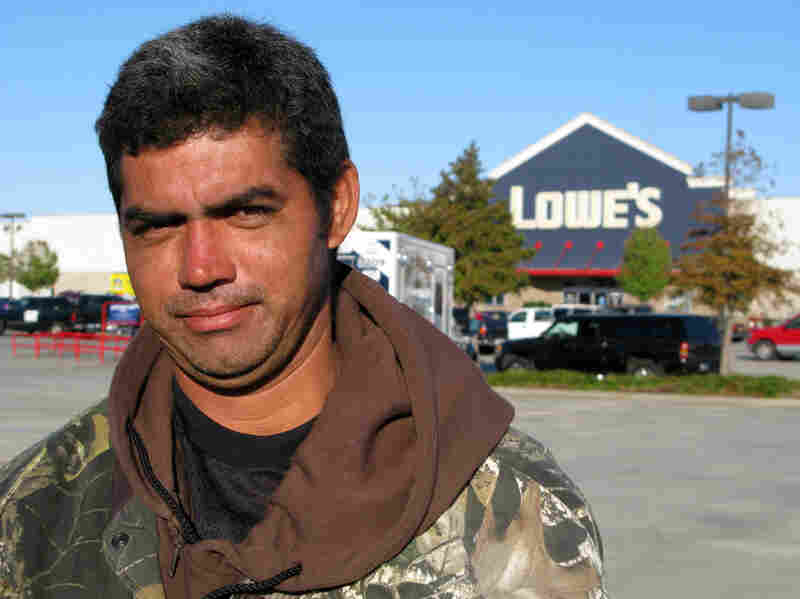 Day laborer Yohanni Castillo from Honduras waits for work outside a Lowes home improvement store in New Orleans. Jobs are drying up, he says, and he hasn't worked in four days. Even when work does comes along, he says, he doesn't always get paid. Richard Gonzales/NPR hide caption 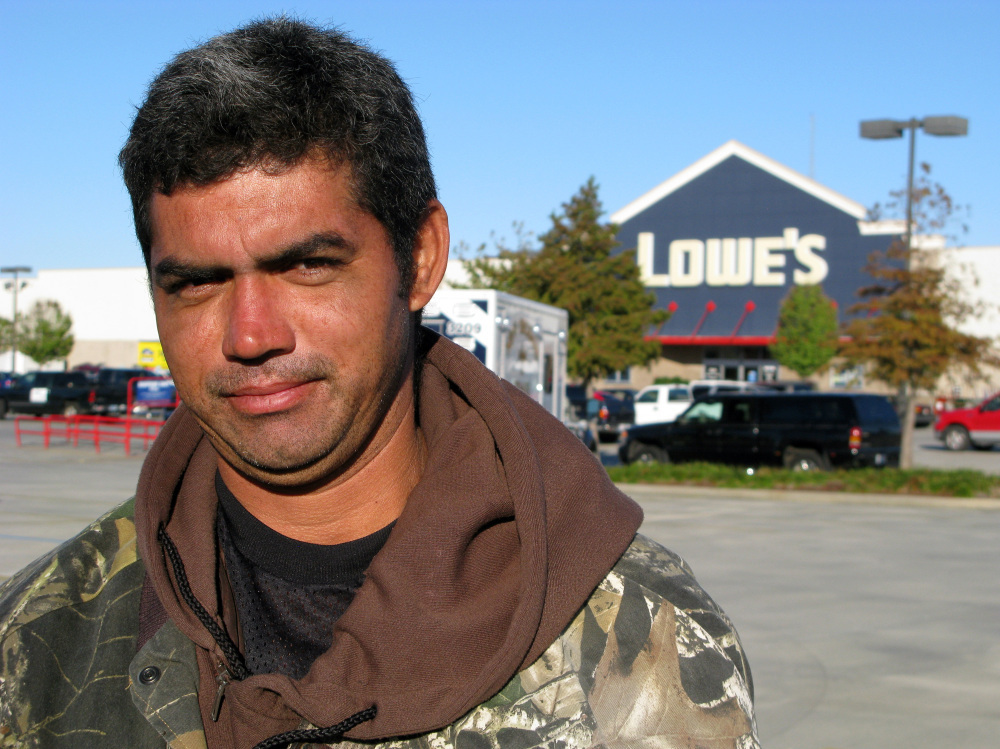 Day laborer Yohanni Castillo from Honduras waits for work outside a Lowes home improvement store in New Orleans. Jobs are drying up, he says, and he hasn't worked in four days. Even when work does comes along, he says, he doesn't always get paid.

Since Katrina, the Hispanic population in the New Orleans metro area has skyrocketed by more than 33,000 people. That's a 57-percent increase in the past decade, much higher than the national average.

They came for the construction jobs — and they've chosen to stay. Often, you can find about a dozen Latino men hanging out near a home improvement store looking for work near a mostly black neighborhood.

Yohanni Castillo, 38, a carpenter from Honduras, says he's been here since the early days of Katrina.

"Carpentry, demolitions, any kind of construction," he says. But lately, he says there's been less work available.

Castillo says the main problem is that employers want workers who have the papers to prove they're here legally. Right after Katrina, no one really cared. The other problem, he says, is that sometimes he doesn't get paid the wages he's been promised.

And everybody here can tell you the same story, Castillo says, because it's happened to everyone.

Demographer Alison Plyer says the Hispanic influx since Katrina should surprise no one.

In a month-long series, NPR's Debbie Elliott and Richard Gonzales hit the road to hear how Americans are dealing with the fragile economy. Explore the map below to hear the stories they've found.

"There's actually a phenomena demographers call 'hurricane chasers,' where, whenever there's a hurricane in Florida or along the Gulf Coast, Latinos will go because they know there will be debris removal work and home repair work, and then they assume that they will stay just a little while and they will go somewhere else," Plyer says. "But here that work lasted for several years and so folks stayed."

It's common to hear the immigrants say they know they played a major role in rebuilding the city when no one else would do the dirty work. Jordan Shannon is the spokesperson for Puentes, an advocacy group that formed following Hurricane Katrina.

"The city really owes a debt that it is not always so quick to acknowledge, but it nevertheless has really been rebuilt on the back of Latino labor," Shannon says.

Of course, not everyone agrees.

David Stroder, an unemployed African-American dishwasher, says there's no denying there's some resentment in the black community here towards Latinos.

"They don't like the fact that they're coming in and taking all the jobs. Just like me, I'm trying to find a job, but I don't build houses though. I can't do that. If I could do that, I'd be making some money!" he says.

But the work can bring some Latino immigrants closer to the attention of immigration authorities. Just last August about 30 workers were gathered in the parking lot of an apartment complex in nearby Kenner, La. They had just wrapped up a job raising the elevation of several homes.

"These workers spent two weeks of hard work and were expecting to get paid," says Jacinta Gonzalez, an organizer for a group called the Congress of Day Laborers. She says collectively the workers in Kenner were owed over $100,000.

"Instead of getting paid, they had a raid. Immigration Enforcement had coordinated with three law enforcement agencies," Gonzalez says. "This happened on Aug. 29, 2011, the anniversary of Katrina."

A spokesman for the U.S. Attorney's Office in New Orleans confirmed that ICE detained several individuals that day as part of an investigation of the company, Louisiana Home Elevations. Its owner and an employee have been charged with seven counts of harboring illegal aliens and money laundering. 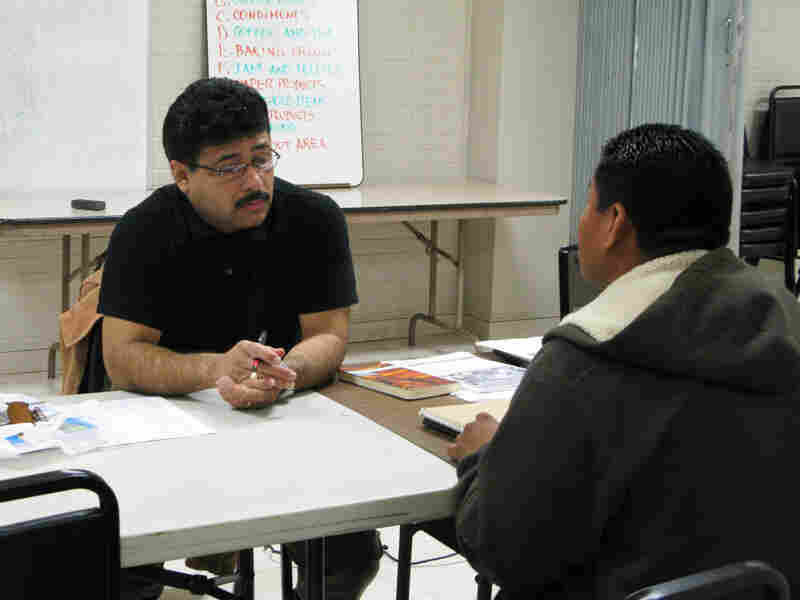 Methodist Pastor Oscar Ramos conducts English classes for Latino immigrants in New Orleans. The majority of the immigrants say they arrived after Katrina to work in construction and intend to stay. Richard Gonzales/NPR hide caption 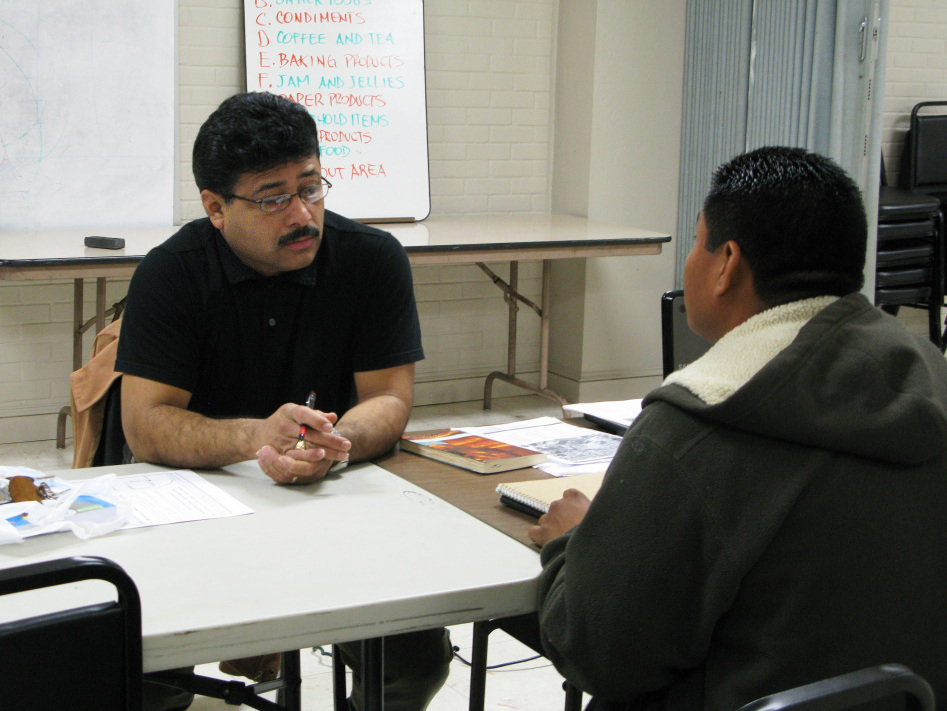 Methodist Pastor Oscar Ramos conducts English classes for Latino immigrants in New Orleans. The majority of the immigrants say they arrived after Katrina to work in construction and intend to stay.

Despite the pressure from ICE, many New Orleans immigrants say they intend to hang on.

On a recent workday night in a local Methodist church, about 40 immigrants were attending English classes. The pastor, Oscar Ramos, called for a show of hands as he asked a series of questions. How many people arrived after Katrina?

Everyone raised their hand. How many have worked in rebuilding the city? A majority. Then he asked: How many people have been ripped off? Not paid the money they earned? Virtually every hand shoots up.

Later, Hugo Torres, a 37-year-old construction worker, says it happens because they're illegal. But then he says he doesn't begrudge Americans who say he has no right to stay in New Orleans.

"I mean, the word illegal, I do understand that. I mean, what part of the word illegal we don't understand? Of course, illegal means illegal. I do understand, but," Torres says with a sigh, "with all this violence in Latin America like in Mexico and Central America, it is very difficult to live there. And I think the only way where we can see a future is in the United States."

But what no one can yet say is how long New Orleans will see its future in these new immigrants.