Accessibility links
Jockey Chris McCarron Plays Not My Job McCarron has had plenty of success on horseback, but what does he know about racing other animals? We've invited him to play a game called: "On your marks, get ready, squirm!" 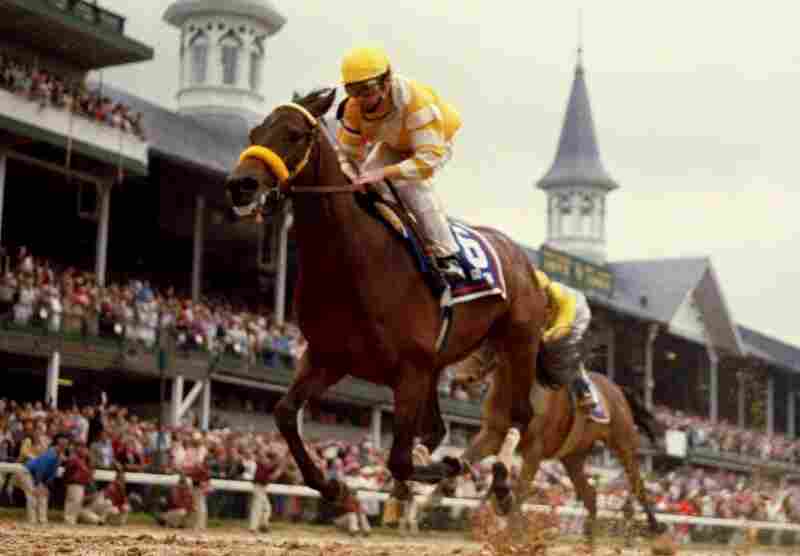 Chris McCarron crosses the finish line on Go for Gin to win the 120th running of the Kentucky Derby in May 1994. Michelle Wilkins/AFP/Getty Images hide caption 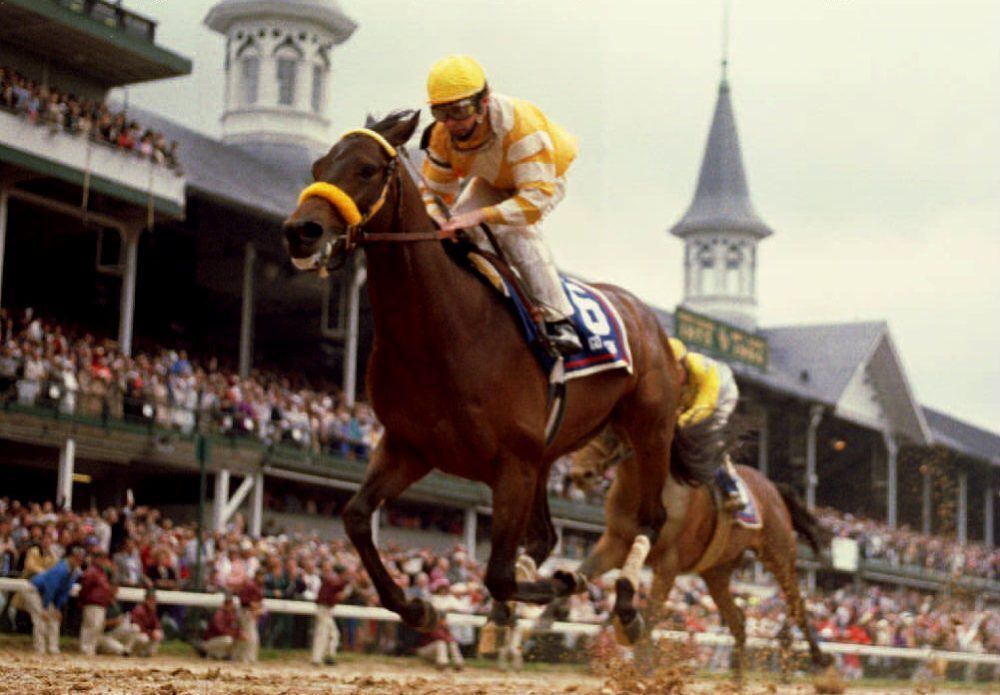 Chris McCarron crosses the finish line on Go for Gin to win the 120th running of the Kentucky Derby in May 1994.

Hall of Fame jockey Chris McCarron has won every race a jockey can win ... from the Kentucky Derby to ... let's be honest — who cares about those other ones? These days, he trains jockeys at the North American Racing Academy.

We've invited him to play a game called "On your marks, get ready, squirm!" McCarron has had plenty of success on horseback, but people like to race other things, too. So we'll ask him three questions about different kinds of racing around the world.

And now, the game where we invite on people who are simply the best at what they do. We invite them on to do something else.

SAGAL: Hall of Fame jockey Chris McCarron has won every race a jockey can win, from the Kentucky Derby to - well let's be honest, who cares about anything else.

SAGAL: He's now teaching others how to be jockeys at the North American Racing Academy, here of Kentucky. Chris McCarron, welcome to WAIT WAIT...DON'T TELL ME! It's a pleasure to have you.

SAGAL: Now, here we are in horse country, talking to a great jockey who made your career, starting in California, I think, but I just found out that you actually grew up in Dorchester, near Boston.

SAGAL: How - I've been to Dorchester, how does a Dorchester kid end up in Kentucky as a jockey?

MCCARRON: I was just very blessed to be a victim of fate.

SAGAL: Like a horse was racing by and all of the sudden you tripped and fell onto it the next thing you know?

MCCARRON: Actually, no, my older brother Greg, who's seven years my elder, was accidentally introduced to Suffolk Downs in East Boston.

MCCARRON: That's correct. And I just followed him. He came home one day, got kicked in the face, his head was all exploded and everything. I said, I want to do that.

SAGAL: And those are the ones you remember.

MCCARRON: Not when you're young and fit.

MCCARRON: For me, now it would be, yeah.

SAGAL: I don't know if you ever heard this, but I have heard it said that jockeys are the most fit of all athletes.

SAGAL: But I don't want to disrespect you, but you're not doing the running I can't help but notice.

SAGAL: You're just kind of hanging on, from what I can tell. Tell me how difficult it is. What is involved in being a successful jockey?

MCCARRON: It's not brute strength, but in order to perched in a pair of stirrups on a very small saddle on a horse going 40 miles an hour, you have to have a tremendous amount of strength in your legs and your lower back and your arms. But it's more stamina, and it really boils down to technique.

SAGAL: Really? But if you're riding so many different horses in the course of a day, presumably you don't have a chance to bond with a horse, like Elizabeth Taylor does in "National Velvet," right?

SAGAL: That right there is the extent of my knowledge.

CHARLIE PIERCE: God, not even Seabiscuit.

SAGAL: I mean but you're jumping on a strange horse and you're going okay, we're going to do this. I mean, are horses different? Do you have to, like, learn what the horse responds to?

MCCARRON: They can be quite different, yes, and a lot of different personalities, lots of different idiosyncrasies. It's a matter of spending good, quality 12 minutes with them before you go in the gate.

SAGAL: Get to know them.

SAGAL: How do you get to know a horse? What's like an opening conversational gambit with a horse?

MCCARRON: No, you really have to - you develop a sense, you develop a feel. We rely a great deal on what the trainer has to tell us in the paddock. They'll give us some insight as to whether a horse will respond when you crack them with the crop or if they'll sulk or if they don't like to run inside.

Some horses don't like to be back behind horses and getting all that dirt and sand kicked up in their face. They might resent that. So there are little things that the trainer - I resented it too.

MCCARRON: I much prefer to go to the lead.

SAGAL: How do you respond to the crack with the whip?

SAGAL: Because now I'm learning you. I feel like after we're done, I could ride you.

MCCARRON: I hope not.

SAGAL: So do horses really - are they competitive? They want to win?

MCCARRON: They're bred to run. You know, thoroughbreds are truly, truly bred to run and they enjoy it. I firmly believe that they really love to get out there and participate in the competition. It's a huge thrill to be sitting on one's back in a starting gate, standing still and all of the sudden the gates fly open and you're going 40 miles an hour in three strides. It's a fantastic feeling.

SAGAL: Right. If the horse doesn't want to go, how do you motivate them? Do you show it the movie "Seabiscuit"?

MCCARRON: If you want to eat tonight.

MCCARRON: No, again, it's a matter of getting to know the horse and relying on what the trainer has to say with regard to what can you do on this horse's back that's going to get the best out of him. How are you going to get that horse to best cooperate for you and with you.

Sometimes it's the use of the crop and other times it's just pumping with your hands.

SAGAL: Just grabbing those reins and pumping with your hands.

SAGAL: Are you able to translate any of the skills you learned as a jockey to your personal life?

MCCARRON: I thought you were going to say to my students.

SAGAL: No, no, no. You've raced some very famous horses, including a Triple Crown winner.

MCCARRON: You know, I didn't win the Triple Crown.

MCCARRON: I appreciate the credit.

SAGAL: Yeah, I thought you did.

MCCARRON: But, no, I won each one of the Triple Crown races twice, but I never actually got all three of them in one year.

SAGAL: In the same year and the same horse. That's what you have to...

SAGAL: It counts as far as I'm concerned. The horses, when they do really well, they tend to become very famous, even among non-horse racing people, but the jockeys less so. Does that ever bother you that the horses...

MCCARRON: All the time.

SAGAL: Do you get bitterly jealous?

MCCARRON: I'm doing all the work up there for crying out loud.

MCCARRON: They're bred to run. I'm not bred to ride.

MCCARRON: I had to learn how to do that.

SAGAL: And the oats they give you aren't as good. And you're like, oh...

GROSZ: And they get to have a lot more fun in retirement than he does.

SAGAL: Really? Yeah, I was about to - you've retired from racing, so did they put you out to stud?

MCCARRON: Yeah, but the fee is very, very minimal.

SAGAL: Well, Chris McCarron, it is a pleasure to have you with us, but we have asked you here to play a game we're calling?

On your marks, get ready, squirm.

SAGAL: Sure, you're a Hall of Fame jockey but as far as we know your career has been limited to horses. But people like to race other things. We're going to ask you three questions about different kinds of racing around the world. Get two of these questions right, you'll win a prize for one of our listeners, Carl's voice on their home answering machine. Carl, who is Chris McCarron playing for?

KASELL: Chris is playing for Barbara Sternberer of Lexington.

SAGAL: How confident are you feeling?

SAGAL: Do you have like a mental thing you go through when you're starting a competition?

SAGAL: All right, ever mind. The first turtle race in America happened, as far as we know, in Chicago in 1911. This race reportedly featured what? A: child jockeys sitting on top of the turtles, holding out sticks with pieces of cabbage?

SAGAL: B: each turtle getting a flashy name, like Lightning McGurk and Spirit of Rapidity?

SAGAL: Or C: the winning turtle owner getting the loser turtles as a prize, in the form of turtle soup.

MCCARRON: Oh boy. I hate to say it, but I think it's the soup.

SAGAL: You think it's the soup?

SAGAL: No, I'm afraid it was actually the child jockeys sitting on top of the turtle.

SAGAL: Big turtles, these land tortoises, and their kids would sit there holding the cabbage. The winner's name was lost to history, but it was the first person to crawl out...

SAGAL: All right, the next question. Brisbane, Australia is the home of the annual championships in what sport? A: cockroach racing? B: slime mold racing? Or C: inch worm racing?

SAGAL: Interestingly enough, that was not an option.

GROSZ: But it's a better answer.

SAGAL: You improved it. It was fast though. It was good.

SAGAL: Annual cockroach racing championship happens in Brisbane, Australia. Thousands of people come to watch. They are all drunk.

SAGAL: All right, this is exciting. You're making a charge from the rear, as I think you might say.

SAGAL: Coming up on the rail. Did I get that wrong? I'm sorry.

SAGAL: What do I know?

MCCARRON: It's coming from behind.

SAGAL: I'm from New Jersey. We bet on dice. All right.

SAGAL: So here you go, you're coming along, you're coming along and you can win this now if you get this one right. Let's say you want to do some racing in the privacy of your own home. For very little money, a very reasonable price, you can buy a kit that would allow you to competitively race what? A: head lice? B: sea monkeys? Or C: your own infant children?

SAGAL: Carl, how did Chris McCarron do on our quiz?

SAGAL: Now, we'd like you to stand here in the winner's circle with this wreath of flowers around Carl's neck, if you don't mind.

SAGAL: How does this victory compare to some of the others in your career?

MCCARRON: Oh, it's the best.

MCCARRON: Well the last one you won is always the best.

SAGAL: Chris McCarron is a Hall of Fame jockey and director of the North American Racing Academy, part of the Kentucky Community Technical College.

SAGAL: Chris McCarron, thank you so much.