Accessibility links
Alternate Routes To One Goal: Tax The Wealthy Democratic governors Andrew Cuomo and Jerry Brown are both are asking their states' wealthiest residents to pay higher income taxes to help plug major holes in their budgets. That's pretty much where the similarities end.

This week, the governors of New York and California proposed tax hikes to plug major holes in their state budgets. Governors Andrew Cuomo and Jerry Brown are both Democrats, and both are asking their states' wealthiest residents to pay higher income taxes.

That's pretty much where the similarities end. The execution of their tax proposals is a study in contrasts.

'We Have To Talk'

In New York, Cuomo's tax reform proposal followed a carefully crafted script, including a recorded video message to his constituents.

"Years ago, when my grandfather was still with us, and he wanted to have a significant conversation, would look at me and say, 'Andrew, we need to talk.' Well, my friends, we have to talk," Cuomo said in the video. 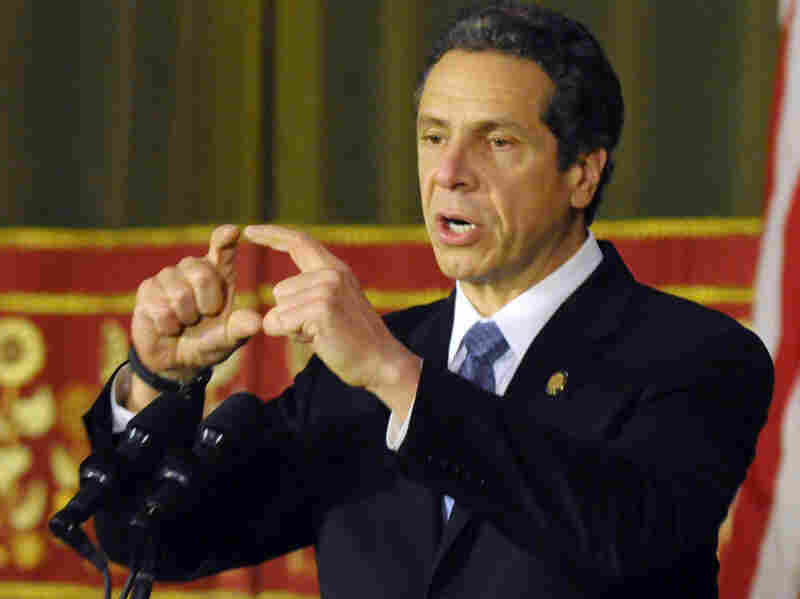 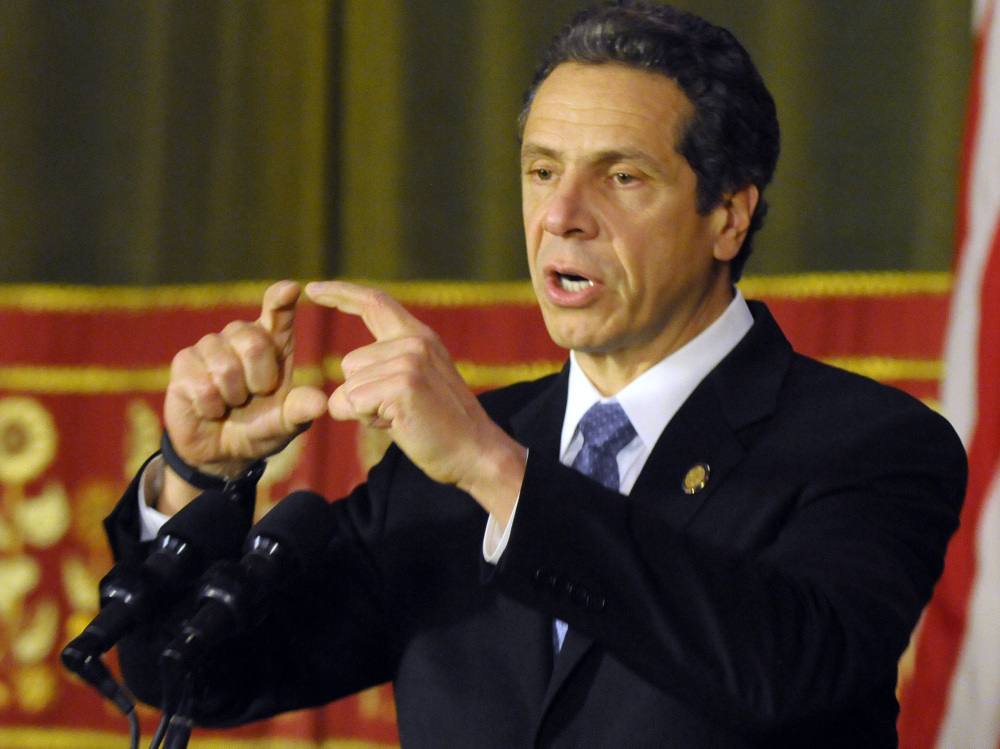 Cuomo floated his tax reform plan last Sunday. By Wednesday night, the legislature was voting to cut income taxes for some New Yorkers, while raising them for those in the highest income bracket. Cuomo did a victory lap for reporters.

"An individual at $20,000 pays taxes at the same rate [as] a person making $20 million, and it's fundamentally unfair, in my opinion," he said. "These changes are long overdue."

The tax deal came together just weeks before the expiration of New York's so-called "millionaires tax," a surcharge on individuals who earn more than $200,000 a year. After this week's deal, they'll still wind up paying more in taxes next year than they expected, but less than they would have under an extension of the millionaires tax.

The details were largely hammered out behind closed doors by two Democrats — the governor and the assembly speaker — and one Republican, the majority leader of the state Senate. That left some Republican legislators, like Brian Kolb, feeling cut out of the debate.

"I disagree with raising taxes in a fragile economy — on anyone," Kolb says. "This is how they're couching it, 'Oh let's go after the millionaires. They've got the money, even though they're paying the most in taxes now.' It's wrong."

As recently as October, Cuomo seemed to agree, saying higher taxes would make New York less competitive. However, Cuomo changed course when confronted with a projected budget shortfall of more than $3 billion next year. Kim Rueben is a senior fellow at the Tax Policy Institute, a partnership between the left-leaning Brookings Institution and the Urban League.

"Part of what governors need to respond to is the fact that the recovery isn't really as good as they thought it was last spring or last fall," Rueben says.

In Calif., A Different Set Of Rules

California has big budget problems, too. While Cuomo hammered out his tax deal in a couple of days, Brown faces a much longer, messier process.

"The very word 'deal' doesn't exist out here," says Alan Auerbach, who teaches economics at the University of California, Berkeley. 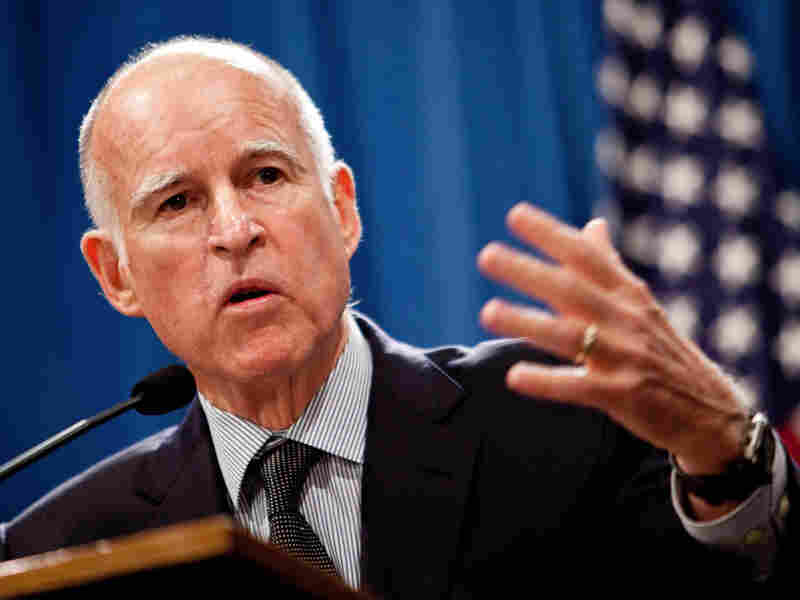 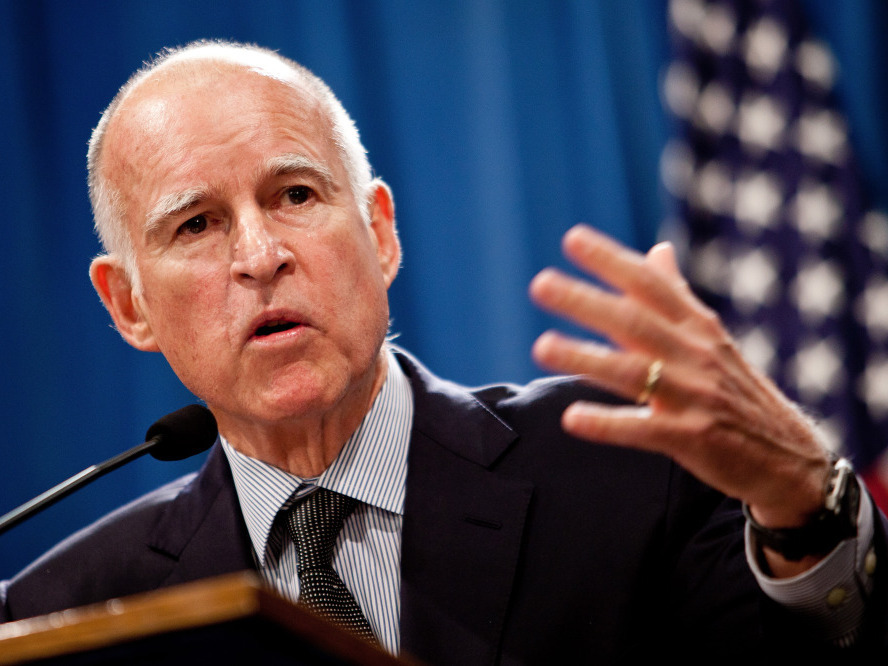 Since taking office this year, Brown has failed to get more revenue through the state legislature, where a two-thirds majority is required to raise taxes. So Brown is going directly to the voters. On Monday, he proposed a ballot measure that would raise $7 billion in new tax revenues. His opponents are backing a ballot measure of their own.

"We do have one of the highest income tax rates already. We have the highest state sales tax. California does not have a revenue problem, but it has a spending problem," says Jon Coupal, president of the Howard Jarvis Taxpayers Association in Sacramento.

Coupal's organization is joining with other anti-tax groups to put a new spending cap before voters, so that California won't have to depend as much on volatile income taxes.

"When the boom time comes, our elected officials are incapable of putting some of that money away, and they tend to spend what comes in the door," he says. "And the problem with that is when the inevitable bust comes, we're left running around like chickens with our heads cut off looking for additional revenues."

Without new revenues, Brown said he would have "no choice" but to make deeper cuts to education and public safety. Rueben at the Tax Policy Institute says the political winds may be shifting in Brown's favor.

"All the Occupy movements across the country have brought into stark relief the fact that there is a lot of income inequality, and it's been growing over time," she says. "And so doing something that has a more progressive tax structure in place seems like people might be more receptive to it right now."

Cuomo denied that Occupy protesters played any role in his thinking on taxes, but to supporters of the movement, his actions suggest otherwise.