Accessibility links
Spandex Stretches To Meet U.S. Waistlines Spandex may make you think of disco or workout gear. But because this wonder fiber can stretch more than a 100 percent and snap right back to shape, its claim to fame may just be that it has clothed Americans as obesity rates have soared. 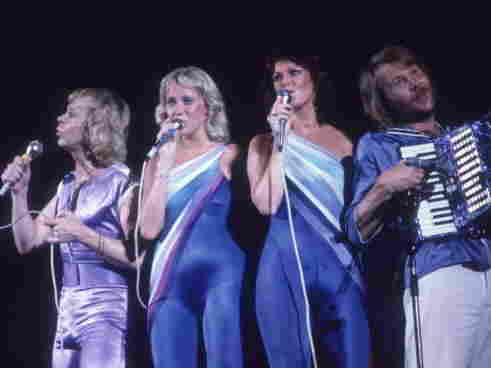 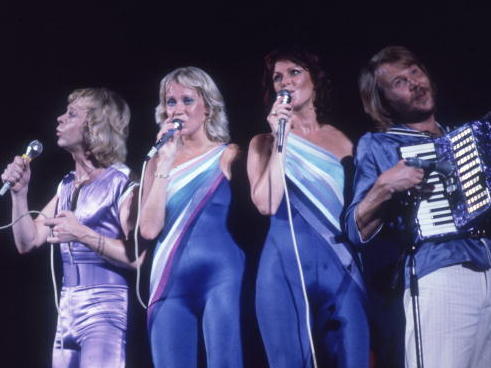 When you think of spandex, 1970s disco mania may come to mind. Spandex came off the dance floor and into everyone's closet — stretchy leggings, jumpsuits and leg warmers were the rage. But spandex had a life before disco. It was invented by two DuPont chemists. It made its debut in 1959, first used in bras and jockstraps, as well as in workout gear.

But it quickly became known as a "wonder" fiber — it can stretch more than 100 percent and snap right back to shape. It is estimated that of the 20.5 billion pieces of clothing Americans bought last year, 80 percent of those garments had spandex in them.

And as the waistlines of Americans have expanded, their clothes have been stretching with them — largely thanks to the synthetic fabric.

New York City designer George Simonton's clothes label, Simonton Says, specializes in stretchy fabrics. They sell exclusively on QVC. His studio is in the heart of the fashion corridor in Manhattan — on the 8th floor of a high-rise in a minimalistic space where several racks of couture fill the room alongside his QVC collection.

He began his career in the mid-1960s. Back then, says the designer, fashion was all about glamour, but fabrics were rigid and people were thin. Today, two-thirds of American women are plus-size. Simonton says spandex has changed the industry.

"Years ago, when we made a suit or a coat, it was built like a battleship. It was like bulletproof. Today, it's beautiful clothes but high comfort level," he says. "Everything has stretch — pants, skirts, dresses, blouses, knit tops."

So what do women make of this spandex explosion? At a swanky, outdoor mall in suburban Maryland, shoppers aren't shy to speak. 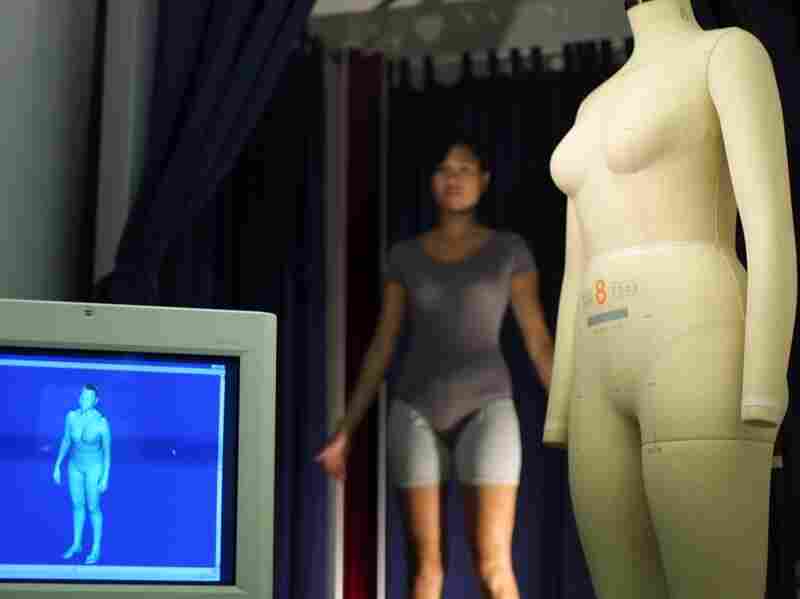 Alvanon, a clothing size and fit consulting firm in Manhattan, uses a device called AlvaScan to create model forms — which are then used to create clothing sizes. Courtesy of Alvanon hide caption

Sidebar: How AlvaScan creates the sizes you wear
toggle caption
Courtesy of Alvanon

"I do like spandex because of the way it curves my body," says Janine Buffered. "We are not perfect bodies, but sometimes you do want to feel lean and beautiful. Put on spandex. You're good to go."

Rachel Gordon, a size 10 law student, doesn't agree. "I personally would never wear it, but I definitely see a lot of spandex, and people probably should not wear as much as they do."

Nancy Lee, a size 14, says spandex has changed her life. "I actually specifically look for it when I look for clothes, because for years I didn't wear jeans until my kids said, 'Mom, get the spandex jeans.' And I put them on, and I was like, 'Yeah, I can wear jeans again!' "

Brett Godwin, a size 4, says spandex is overused. "I think that spandex is made to accommodate people who are overweight. I've seen some terrible sights. They are overweight, and they would put on the tightest spandex things they can find, and they just look absolutely awful."

Obesity In America, By The Numbers

"Is that the sign of decline of Western civilization? Perhaps," says Ed Gribbin, president of Alvanon, a clothing size and fit consulting firm in Manhattan. "Some of us cringe when we see the things that we see. Some people will be poured into a garment and think they look fabulous, and someone else might look at that person and think that's not very attractive."

Changes in lifestyle, as well as a huge drop in spandex price over the last decade, are pushing the use of the fiber in apparel like never before. In 2000, there were roughly 200,000 tons of spandex globally. That number has more than doubled. The cost for a pound of spandex 10 years ago was $12; today, it's about $4 a pound.

Kim Hall, marketing manager with RadiciSpandex Corp. in North Carolina, says designers love spandex because it adds fit, performance, shape and function, but pricing made it prohibitive up until the past five or 10 years, when the price of spandex significantly dropped and a surplus of product flooded the market. "These changes for the first time have encouraged designers to use the fiber. They are able to put it on in many more applications now," Hall says. 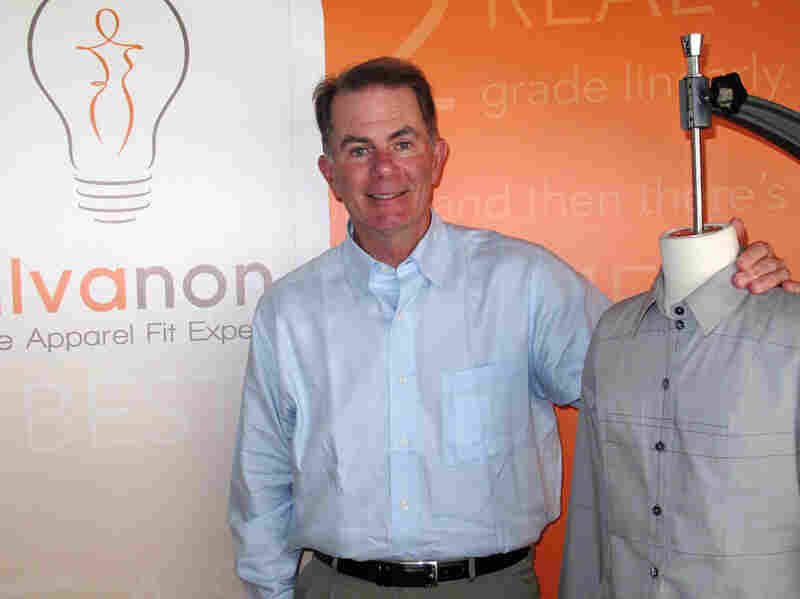 Ed Gribbin, head of Alvanon, says spandex is a "democratic" fiber because it morphs to the body as opposed to limiting it. Marisa Penaloza/NPR hide caption 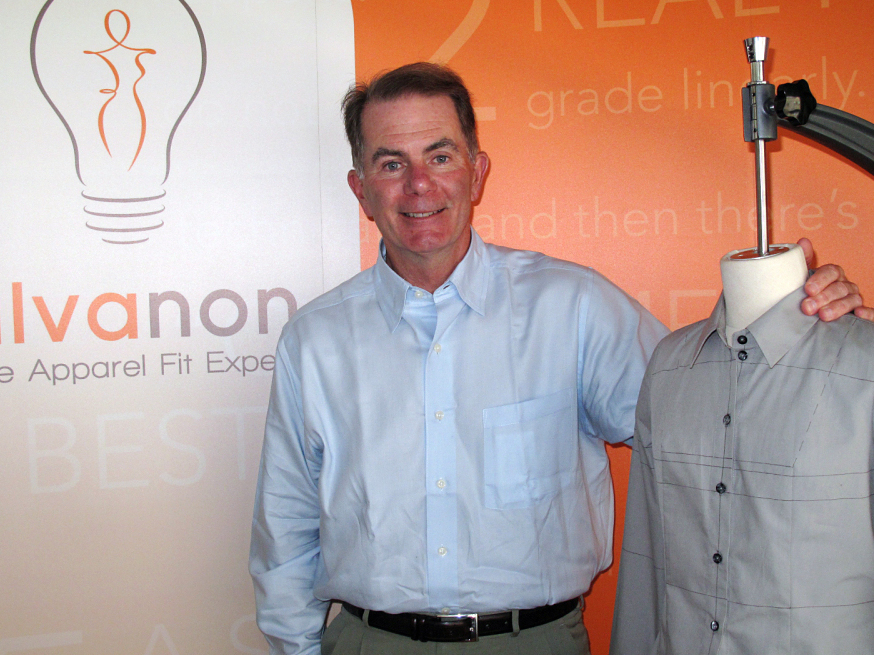 Ed Gribbin, head of Alvanon, says spandex is a "democratic" fiber because it morphs to the body as opposed to limiting it.

A good example is PajamaJeans, marketed by Hampton Direct in Vermont. These soft, stretchy pants came out last year and have sold more than 600,000 pairs online and at shops like Sears and Wal-Mart. As far as sizing goes, no one is left out. They fit everyone from petite to plus size.

Alvanon's Gribbin says spandex is a "democratic" fiber because "the product will morph to the body as opposed to limit the body. But many wonder whether spandex is encouraging people to be bigger."

"A lot of people ask the same question of the industry. I don't think that's the case at all," Gribbin says.

Martha Paschal is a youthful-looking 50-year-old financial consultant with what she calls a "muffin top" — extra rolls of waistline flab. Browsing dresses at Tysons Corner Center mall in Virginia, she said she never looked for spandex until a few years ago, when a store attendant suggested she try on a "pencil" skirt — one of those slim, body-hugging skirts. She says she never thought she'd own one — that is, until she tried on a spandex one.

"They were designed to be a straight skirt, and muffin tops don't look good in pencil skirts," she says. "But now I'm the proud possessor of a pencil skirt that can somewhat camouflage a muffin top."

The "muffin top" population has grown so much that this year, the term was added to the Oxford English Dictionary.

Paschal is in good company. Women buy 78 percent of all apparel sold in the United States, and health officials say 65 percent of them are overweight or obese.

Paschal loves spandex, she says, but feels conflicted. "It's dishonest. It lets you get away with wearing things that you probably shouldn't just because it expands to fit. I think it is deceptive."

Over the years, Paschal has bounced on and off diets, losing and gaining again and again. She says her comfort is more important to her than her guilt. So she's not ready to give up on spandex, but she forces herself to look in the mirror before heading out.