Accessibility links
Now In Need, Romney Welcomes Media Until the last week or so, GOP presidential candidate Mitt Romney has made himself scarce to the media, delivering only tightly honed messages. He now has a newfound eagerness to talk to reporters — some of them, at least. 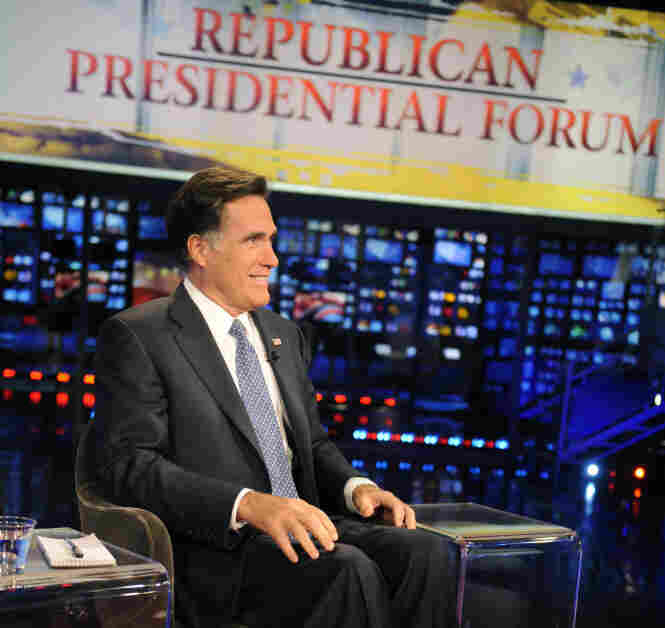 Former Massachusetts Gov. Mitt Romney appears on the Fox News program Huckabee on Dec. 3. The Republican presidential candidate has made a number of media appearances recently, mostly on Fox. He scarcely spoke to the media until the last week or so. Henny Ray Abrams/AP hide caption 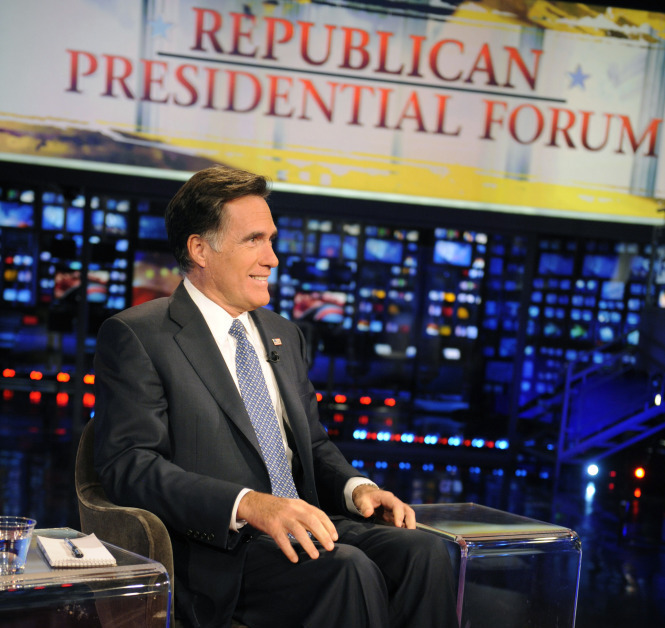 Former Massachusetts Gov. Mitt Romney appears on the Fox News program Huckabee on Dec. 3. The Republican presidential candidate has made a number of media appearances recently, mostly on Fox. He scarcely spoke to the media until the last week or so.

Republican presidential candidate Mitt Romney has a newfound eagerness to talk to reporters — some of them, at least.

To hear Romney tell it, you'd think he had always welcomed the press corps.

"You're going to see me all over the country, particularly in early primary states," Romney said last week to Fox News host Neil Cavuto. "I'll be on TV — I'll be on Fox a lot because you guys matter when it comes to Republican primary voters. I want them to hear my message and have an opportunity to make their choice."

Off Mic, On Script

Last week, Romney was as good as his word, popping up on Fox several times. ABC interviewed him Saturday. Next week he'll appear on Fox's Sunday public affairs show. And, yes, there have been a lot of debates.

But until the last week or so, Romney had made himself awfully scarce.

"I understand their mindset: They look at the rest of the field, saying, 'None of these bozos can beat us,' " says John Feehery, a Republican communications consultant. "But you never know — stranger things have happened — and you can't play not to lose, but you play to win."

Romney has appeared on many conservative radio talk shows. This fall, however, he routinely shut out reporters on the trail, preferring to deliver carefully honed messages at tightly controlled forums.

In the four weeks between Oct. 11 and Nov. 7, Romney did exactly zero interviews with the national press corps, according to his aides. The New York Times Magazine and Time Magazine both did cover stories on Romney without any help from the candidate.

For much of the fall, Romney has just watched as his rivals self-destruct in public view. Take, for example, Texas Gov. Rick Perry during that now infamous debate where he could not recall all three of the government agencies he would get rid of.

There was also Herman Cain on CNN, vainly trying to keep his lead in the polls while saying that someone was going to come forward and accuse him of having a long-term affair. Ultimately, that allegation, along with others regarding sexual harassment, led Cain to suspend his campaign.

As for the thrice-married Newt Gingrich, he would hardly resonate with cultural-conservative voters, would he? Actually, he would. He's been clobbering Romney in the polls.

In a recent interview with Bret Baier of Fox News, Mitt Romney was defensive.

In late November, after meeting privately with Fox News executives, Romney surfaced several times on the network. Then he sat down with Fox political anchor Bret Baier.

"There's videotape of you going back years speaking about different issues: climate change, abortion, immigration, gay rights," Baier said to Romney. "How can voters trust what they hear from you today is what you will believe if you win the White House?"

The interview went downhill from there.

"His interview with Bret Baier was a complete disaster, and he [has] to show that he's not so brittle," she says.

"People who talk and think a lot of about the so-called 'liberal media bias' fail to take into adequate account that our greatest temptation is not an ideological bias," she says. "It's a personal, human bias of rewarding people and candidates who are nice to us."

Despite changes in how campaigns are waged, and despite his desire for a tightly controlled message, it turns out Romney still needs media exposure. So far, his new recipe appears heavy on Fox — with a dash of the rest.