Accessibility links
'Newt-Romney' Dominates Iowa Debate The rivalry between Newt Gingrich and Mitt Romney took on a life of its own as they squared off Saturday night. The jabs even got personal. The sparring was expected between the GOP candidates — the top two in most polls — as each hopes to win the upcoming Iowa caucuses. 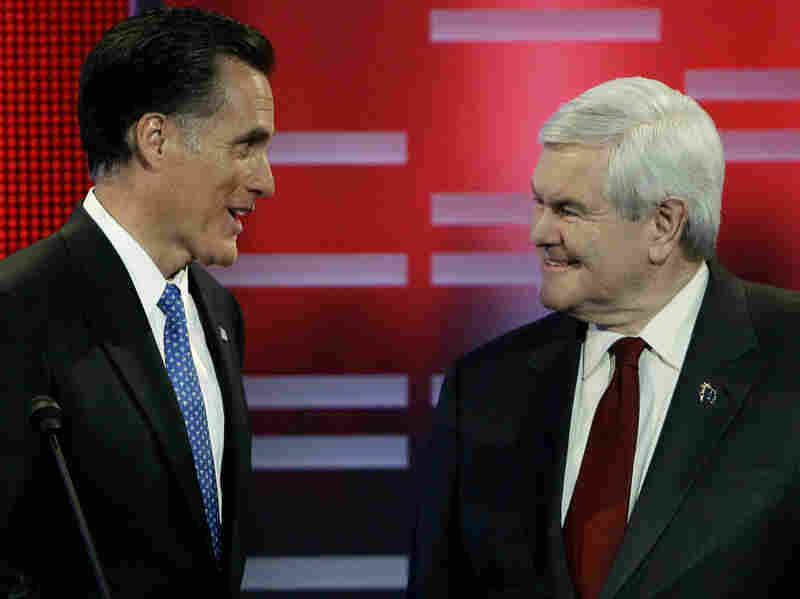 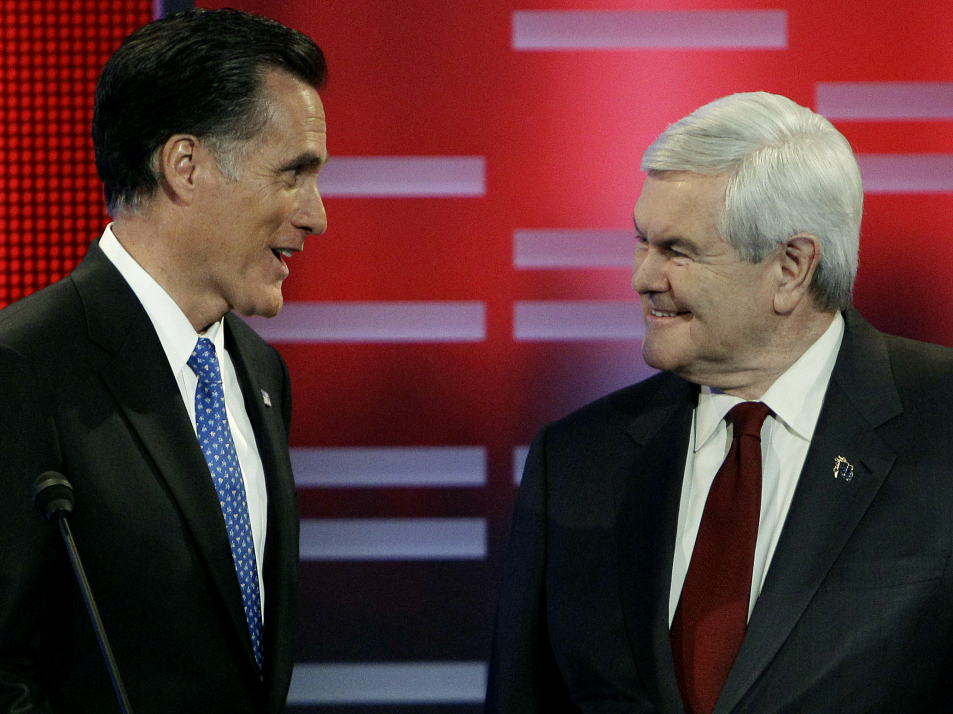 Six GOP presidential hopefuls met in a two-hour-long debate in Des Moines, Iowa, Saturday night, and this time the gloves came off.

This was the first such event since former U.S. Speaker of the House Newt Gingrich moved into the front-runner spot. It had been anticipated that Gingrich and former Massachusetts Gov. Mitt Romney — the top two in most polls — would square off as each hopes to win the Iowa caucuses, now just over three weeks away. They did, and the jabs got personal at times.

For the first 20 minutes of the debate, the candidates took turns talking about lowering taxes and slashing regulations — all pretty predictable topics.

Stephanopoulos asked the field about Gingrich's assertion that he is the candidate with the best chance of beating President Obama. Romney's first reaction was laughter.

Gingrich responded, noting that Romney's own claim to not being a career politician rings hollow.

"Let's be candid. The only reason you didn't become a career politician is you lost to Teddy Kennedy in 1994," he said.

So it went for many minutes. It seemed the rest of the candidates disappeared. Eventually, Rep. Ron Paul weighed in when he was asked about ads he's running attacking Gingrich's record and questioning the former speaker's conservative credentials and consistency.

"Well, he's been on different positions ... on so many issues," Paul said. "You know, single payer — he's taken some positions that are not conservative. He supported the TARP funds."

Eventually Rep. Michele Bachmann joined the fray by creating a new persona for the two men at center stage, calling them "Newt-Romney."

The topic shifted to foreign policy, specifically Gingrich's controversial statement two days ago in which he called the Palestinians an "invented" people. Romney called Gingrich's words incendiary and a mistake. Gingrich stood his ground.

"Somebody ought to have the courage to tell the truth: These people are terrorists," he said. "They teach terrorism in their schools. They have textbooks that say, 'If there are 13 Jews and nine Jews are killed, how many Jews are left?'"

"Therefore, before I made a statement of that nature, I'd get on the phone to my friend Bibi Netanyahu and say, 'Would it help if I said this? What would you like me to do? Let's work together because we're partners.' I'm not a bomb thrower, rhetorically or literally," Romney said.

While much of the debate's focus was on the Romney-Gingrich battle, Romney's most memorable line of the night came at the goading of Texas Gov. Rick Perry, who accused Romney of promoting a federal health care mandate — something Romney says is not true. Romney pressed his case.

"You know what? You've raised that before, Rick, and you're simply wrong," he said.

Perry did not take the bet. It was an awkward moment, especially given Romney's position as the wealthiest of the candidates on stage. Romney has also been criticized as being far removed from regular voters.

Regular voters will get a chance to measure how near or far they feel again on Thursday in another debate, before Iowa holds its caucuses on Jan. 3.