Accessibility links
The State Of The Long-Term Unemployed An NPR/Kaiser poll gives insight into the experience of those without enough work for a year or more. A strong majority of those polled say they don't have much confidence they'll get full-time work. "If I put my hopes in finding another job, I'd just break my heart," one woman says. 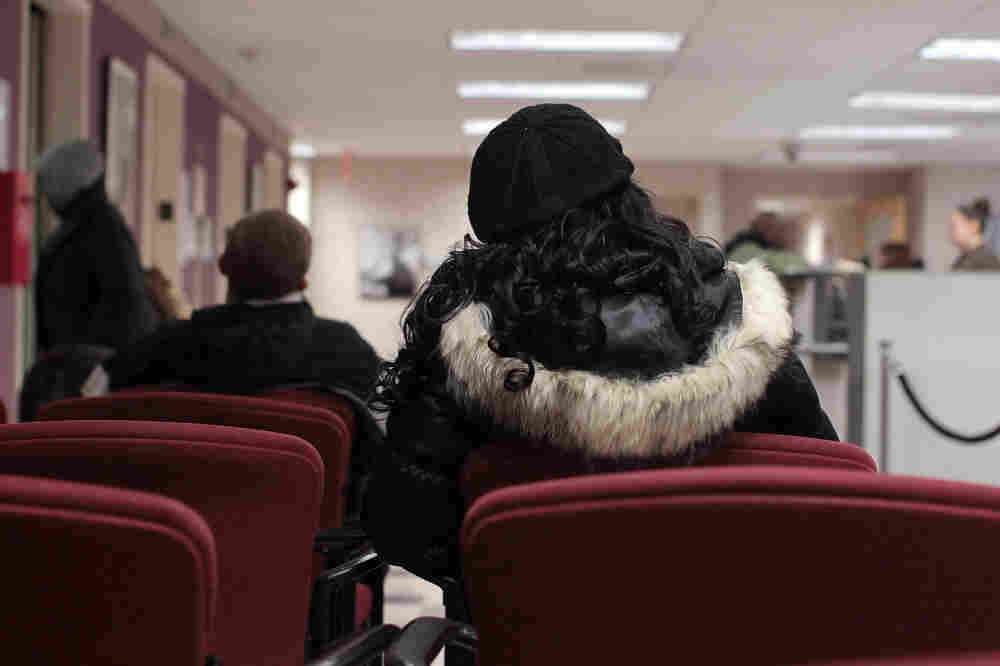 People wait to see a career adviser at a training center operated by the New York Department of Labor in New York City. NPR and the Kaiser Family Foundation conducted a survey on the emotional, physical and financial effects of being without work for a year or more. Nearly 70 percent of respondents would like the government to offer more job training opportunities. Spencer Platt/Getty Images hide caption

Millions of Americans wake up each morning without a job, even though they desperately want to work. It's one of the depressing legacies of the financial crisis and Great Recession.

NPR and the Kaiser Family Foundation conducted a poll of people who had been unemployed or with an insufficient level of work for more than a year. The results document the financial, emotional and physical effects of long-term unemployment and underemployment.

Read the full results of the poll by NPR and the Kaiser Family Foundation:

See A Summary Of Results, Charts
See The Full Results

Only 13 percent of them said they are currently collecting unemployment benefits. The poll also interviewed people working part-time who want full-time work.

Of these long-term unemployed and underemployed, 51 percent said they've borrowed money from friends or family to get by. Close to half say they've had trouble paying for housing and food, and one-third say they've changed their living situation to save money, including moving in with relatives and friends. Additionally, 9 percent say they've lost their home to foreclosure.

Virtually all of that is true for Lin Daniel, whose most recent work was building websites for small businesses. Right now she's living with a friend in Albany, N.Y.

"I'm not homeless and probably never will be, but everything that I had and everything I worked for is gone," Daniel says. "I played the game the way I was — quote — supposed to, you know: house, marriage ... and, nothing. It's all gone."

Still No Job: Over A Year Without Enough Work

The Impacts Of Long-Term Unemployment

One goal of the poll was to focus on personal and emotional health effects. About one-third said their mental and physical health is worse.

David Supon of Buffalo, N.Y., says being out of work is stressful. His last job was managing the construction of a clean coal plant in Ohio, and it paid well into the six figures.

"I could say I'm depressed because I think I am, a little bit," Supon says. "You think you're valuable in your mind, and you want to offer your talents to somebody, and you get rejected, and ... it's rough."

About half of the long-term unemployed and underemployed said they currently have no health insurance, and 56 percent said they've put off getting health care that they needed.

Not surprisingly, nearly a quarter said that lack of work has been hard on their marriages. But interestingly, almost as many said it had a positive effect on their relationships with their children.

Hopes Of Finding Another Job

As for their employment prospects, most are not optimistic, including Lin Daniel.

"If I put my hopes in finding another job, I'd just break my heart. To be honest, I've given up," she says.

A majority of those polled say they don't have much confidence they'll get a job with sufficient pay and benefits. Nearly 70 percent would like the government to offer more job training opportunities and placement services, but only about 1 in 10 believe that government efforts to deal with the poor economy have helped them.

"A lot of it was supposed to be construction, but I really haven't been able to catch on to any of it," Sweden says.

After losing his job in Florida, Sweden moved in with his mother in Romulus, Mich. He's also disgusted with congressional bickering that's held up aid for the unemployed.

"They sit there, and they stretch [extending unemployment benefits] out, and two weeks after they were supposed to vote on it, then they vote on it," he says. "But in the meantime, they put all these people through emotional hell."

As for dishing out blame, about 70 percent said Wall Street institutions and Republicans in Congress bear a lot or some of the blame for the situation the country is in today. Six in 10 blame Democrats in Congress, while just under half blame President Obama.

But those numbers reflect the fact that the long-term unemployed and underemployed identify themselves as Democrat or Democrat-leaning by 2 to 1, leaving their potential impact on the election next November unclear.