Accessibility links
Michael C. Hall: Playing A Killer Role On 'Dexter' The star of Showtime's bloody crime drama talks about the show's eventual plans for an ending — and also about matters both professional and personal, from how he plays an emotionless killer to how Hall himself, while filming Dexter, has dealt with both cancer and a divorce. 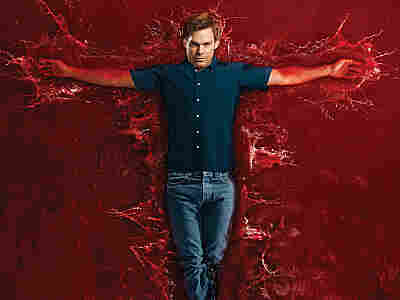 On Dec. 18, the Showtime drama Dexter presents its sixth-season finale. The show stars Michael C. Hall — who played the repressed mortician David Fisher on HBO's Six Feet Under — as Dexter Morgan, a serial killer who kills other serial killers, and who also works for the Miami police as a blood-spatter expert.

Dexter has just been renewed for two more seasons; Hall, one of its executive producers, recently talked with Fresh Air TV critic David Bianculli about the show's eventual plans for an ending — and also about matters both professional and personal, from how he plays an emotionless killer to how Hall himself, while filming Dexter, has dealt with both cancer and a divorce.

On Dexter in Season 6

"Dexter's lost his wife. He's indulged in relationships with serial killers that have nearly done him in, and have done other people in. There are consequences that go beyond the sphere of his own world and his own life, but extend into the sphere of those around him and those he has grown to acknowledge he cares about and loves.

"We're always walking a bit of a tightrope from the beginning, but now that tightrope feels like a piece of dental floss sometimes. As he becomes more human, arguably — or as he has experiences that are pushing him into realms he never anticipated going — he moves towards a sense of humanity, a sense of light in a way. But that throws into relief when he is indulging in his darkness. The spectrum gets ever broad[er] between the light and the dark, I think."

"An actor — me — who is preoccupied with cultivating a sense of authenticity ... playing someone who claims to be without the capacity for authenticity, emotionally or otherwise, who's always pretending. In a way, it was liberating to let go of that preoccupation — 'Does this feel right? Does this feel authentic? Am I telling the truth here?' Playing someone who, as far as he was concerned, was always simulating his behavior. Dexter was an actor of sorts."

On the cast of Six Feet Under

"It was truly an ensemble piece. I remember when we got together for the first read-through in Los Angeles, there was truly, in the blink of an eye, a complete giving over to the sense we were a family. It was so well-cast, both individually and collectively."

On his lymphoma diagnosis during the filming of Dexter

"I think I met it with a sense of bemusement as much as anything. ... Because I was assured from the beginning that if you're going to get something, this was a good thing to get, and they knew how to treat it. And I just needed to decide on a course of treatment. It also coincided with our hiatus, so I was able to spend the hiatus getting through the treatment and getting into remission, and moving on with my life and the life of the show, thankfully."

On his divorce from his co-star, Jennifer Carpenter, who plays Dexter's sister on the show

"It's a unique challenge, one that is unprecedented in my experiences. I haven't been able to compare notes with anyone about it. I think Jennifer is an astonishing actress. She remains a dear friend as well as a dear colleague. I think we take some pride in the fact that we've not just maintained our professionalism, but our sense of enthusiasm about the story. And the story continues for us. We're still in the other's life, in a different capacity I suppose, but it's an amicable situation, to say the least."

On the ending of Dexter