Accessibility links
For U.S. Troops, Fighting Starts At Afghan Border The focus of the war in Afghanistan is shifting to its border with Pakistan. Recent high-profile attacks were planned in Pakistan and carried out by militants who crossed through the mountainous border region. Now, the U.S. military is trying to stem that flow. 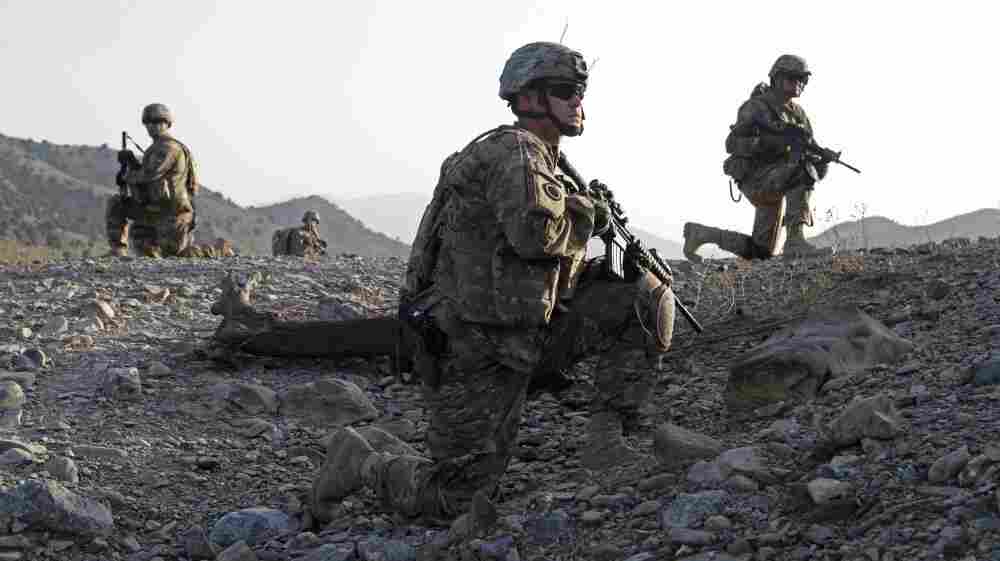 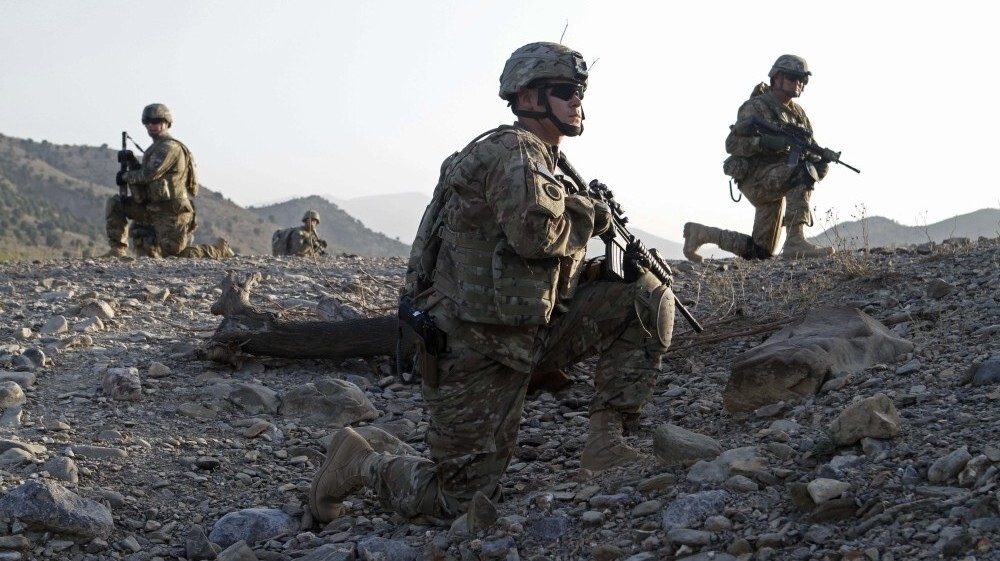 The mountains along the border between Afghanistan and Pakistan would be cruel enough without the war raging on below — cliffs drop from 8,000-foot peaks that are spotted with only a few trees among the rocks.

But Afghanistan's eastern border has become the focus of the conflict as militants plot their attacks inside Pakistan, then slip across the rugged frontier to carry them out.

In Afghanistan's southeast Paktika province, Forward Operating Base Tillman looks across toward Pakistan over craggy peaks that American troops have nicknamed "Big Ugly" and "Big Nasty."

The base is named after Pat Tillman, who left a professional football career to join the U.S. Army. He was killed by friendly fire in 2004, farther north along the Afghanistan-Pakistan border.

At a recent ceremony, some of the soldiers pinned on the Combat Infantry Badge, a decoration that goes only to those who have seen the fighting up close. Lt. Christian Garrels grinned and then winced as his comrades shook his hand and punched the new badge on his chest — a tradition that leaves bruises.

It's a fair bet that all the soldiers at the base will be wearing the badge soon. FOB Tillman is perched along one of the main routes insurgents use to cross back and forth from Pakistan, Garrels says.

Recent incidents along the Afghanistan-Pakistan border have put in sharp relief the importance of that fault line. Only a year ago, the focus of the war in Afghanistan was the Taliban heartland in the south of the country. Now, the battle line is drawn along both sides of the border, in more ways than one.

While American officials say they are winning every confrontation with the enemy, insurgents still pull off attention-grabbing attacks in major cities. Almost all of these attacks are planned in Pakistan and rely on an underground railroad through a few key provinces.

Taliban fighters, and their allies in the Pakistan-based Haqqani militant network, wind through the mountains on foot or mule or motorcycle, sometimes taking two days to reach towns inside Afghanistan, where they have safe houses. FOB Tillman is causing them some frustration, if the number of rockets and mortars that come crashing in is any indication.

Capt. Brad Vance, the commanding officer on FOB Tillman, says it's not always clear where the rockets are coming from.

How the soldiers respond depends on where they think the rockets came from, says Vance. About once a month they consult with two Pakistani army officers stationed at the U.S. base in an effort to prevent incidents such as the one last month when U.S. helicopters apparently killed 24 Pakistani soldiers.

The insurgents that make it past the border then have a relatively fast road to Kabul, and control of that route has become a major military objective. It passes north to Logar province, on the doorstep of the capital.

The governor of Logar, Atiq Lodin, met recently with Americans officials at a district center, where a small U.S. base sits adjacent to several municipal buildings.

Fighters come here from Pakistan, Lodin said, though he added that Afghan and American forces drove them out during the summer's fighting season.

But on Dec. 2, just days after the meeting, a truck packed with 14 tons of explosives rolled into the district center and exploded, demolishing several of the buildings and wounding scores, including one American.

NATO officials say they have captured members of the Haqqani group responsible for the attack. But it's clear that the route from Pakistan to Kabul is far from shut, according to Mawlawi Pir Rohani, a member of the High Peace Council from the border province of Khost.

All over Afghanistan, if a Taliban fighter knocks on a door and asks for shelter he will be taken in — either out of fear, or sympathy or anger at American forces occupying Afghanistan, says Rohani.

A week ago, a suicide bomber killed more than 80 people at a religious ceremony in Kabul, and investigations so far suggest he traveled the same route from Pakistan.