Accessibility links
As Governor, Romney Balanced Budget By Hiking Fees Mitt Romney says that as governor of Massachusetts, he toed the Republican line and refused to raise taxes. But how was Romney able to govern a cash-strapped state for four years? We take a closer look at his actual record on taxes. 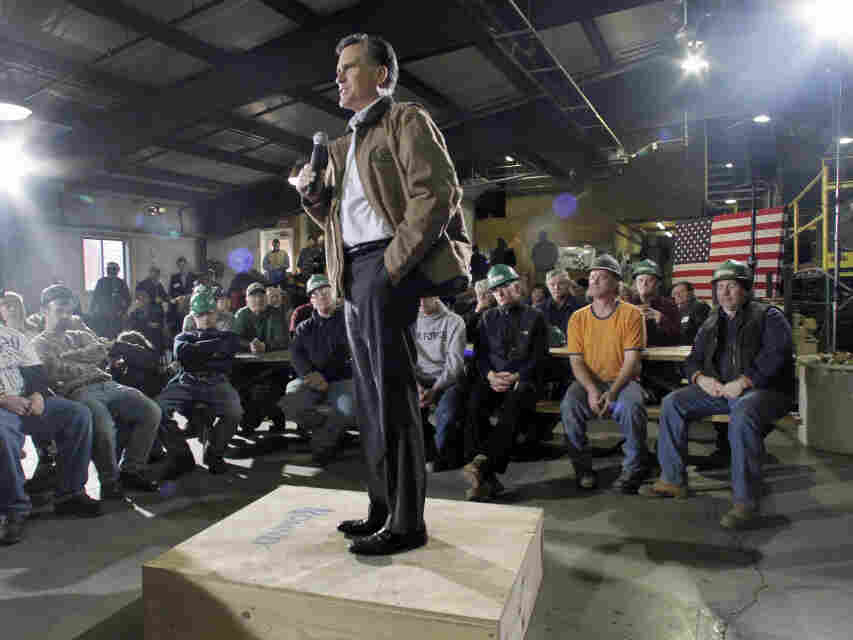 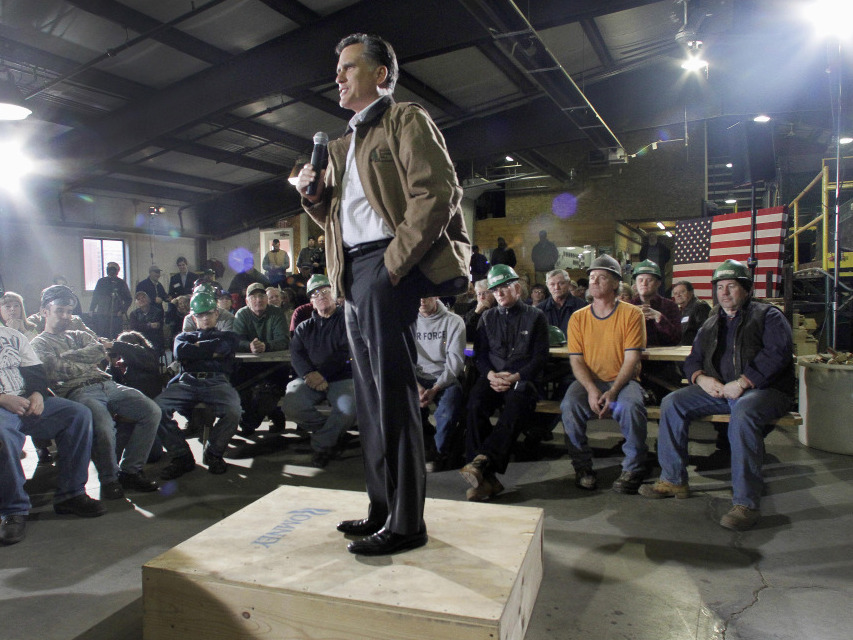 Republican presidential candidate Mitt Romney speaks at a campaign stop with millworkers at the Madison Lumber Mill on Monday in Madison, N.H.

When it comes to taxes, the field of Republican presidential candidates is unified: Keep them low and certainly don't raise them.

In both his runs for the White House, Mitt Romney has hewed to this Republican line. But whether he cut or actually raised taxes as governor of Massachusetts is a subject for debate.

All politicians like to talk about cutting taxes. But at the state level during tough economic times, many end up cutting spending while raising taxes because they have to balance their budgets.

In 2003, when Romney became governor of Massachusetts, the cash-strapped state was going through a budget squeeze of its own. So did the Republican governor react by raising taxes?

Romney's current answer as a contender for the Republican presidential nomination is clear. "Nope. I don't believe in raising taxes. And as governor I cut taxes 19 times and didn't raise taxes," he said during a GOP presidential debate on Fox News this summer.

But is that true?

He put together a plan which included major spending cuts and significant tax and fee increases, which is the only thing he or any other governor could have really done. I mean, there's no magic here.

Mike Widmer, president of the Massachusetts Taxpayers Foundation, tells NPR that Romney raised state revenues more than he cut them. Widmer says most of those 19 tax cuts Romney talks about were pretty modest. Some were weekend sales tax holidays.

Widmer's foundation is a nonpartisan, nonprofit group that attempts to truth-squad policies that cost taxpayers money. He remembers eight years ago when Romney came into office facing a huge budget deficit.

"He put together a plan which included major spending cuts and significant tax and fee increases, which is the only thing he or any other governor could have really done," said Widmer. "I mean, there's no magic here."

Romney hasn't talked about those fees much in recent debates. But back when he ran for president four years ago, he defended his fee hikes at CNN's 2008 Republican presidential debate.

"We had a $3 billion budget shortfall," Romney explained.

"We decided we were not going to raise taxes, and we found that some fees hadn't been raised in as many as 20 years. These were not broad-based fees for things like getting your driver's license or your license plate for your car, but instead something like the cost of a sign on the interstate and how much it was going to cost to publish a McDonald's or a Burger King sign on the interstate. We went from, like, $200 a sign to $2,000 a sign," said Romney.

But Widmer says the fees were broader than Romney suggests, adding that Romney's fee hikes were ones "the average citizen of Massachusetts would pay."

He says Romney proposed raising tuition at state schools. He raised the fees for when you buy a house and register the deed with the state.

Romney even proposed creating a fee for blind people, says Widmer: $10 to receive a state certificate of blindness. He also proposed boat registration fees and increases for state ice-skating-rink rentals.

Romney increased corporate taxes too, together raising upwards of $700 million a year — a figure his GOP rival John McCain seized on four years ago.

Romney contends he raised only $240 million in fees. The Romney campaign didn't make anyone available for an interview for this story but in a statement said that Romney did not raise taxes as governor of Massachusetts.

As for raising corporate taxes, Romney says he was only closing tax loopholes.

Alan LeBovidge, who was the commissioner of revenue for Massachusetts when Romney was governor, agrees with this assessment.

LeBovidge says that under Romney the state was able to raise more than $100 million by closing a loophole for banks where "they could effectively take their income from real estate and pay no taxes on it."

LeBovidge says many banks were abusing the tax code with this loophole. And it was costing the state a lot of lost tax revenue.

"So I explained to the governor what the loophole was," LeBovidge recalled. "[Romney said] go ahead and I was able to settle with 30, 40 banks."

So in this case, Romney seems to have delivered on the image he paints of himself as the former corporate businessman coming in to rid the government of waste and inefficiencies.

And on the campaign trail Romney certainly talks about that, along with cutting spending, as a way to rein in the federal budget.

"We talk about all the waste in government and the inefficiency. And having spent 25 years in business, I know something about taking waste out of enterprises. I'd love to do that to the federal government. And there is massive waste," Romney said during a CNN Republican debate this fall.

While governor, Romney says he found $2 billion in loopholes, waste, and inefficiencies in his first budget.

But Widmer says the rhetoric here — at the state or national level — often overreaches. He says that only a small fraction of that $2 billion was really waste and inefficiency.

The rest was plain old spending cuts and tax or revenue increases. At least at the state level, that's often the cornerstone of balancing a budget.