Accessibility links
And You Thought The Tiger Mother Was Tough Amy Chua, the "Tiger Mother," caused a media sensation with her book about being a superstrict Chinese-American mom. But she looks positively laid-back next to her mainland Chinese equivalent, "Wolf Dad" Xiao Baiyao. He not only beat his kids, he boasts about how he did it. 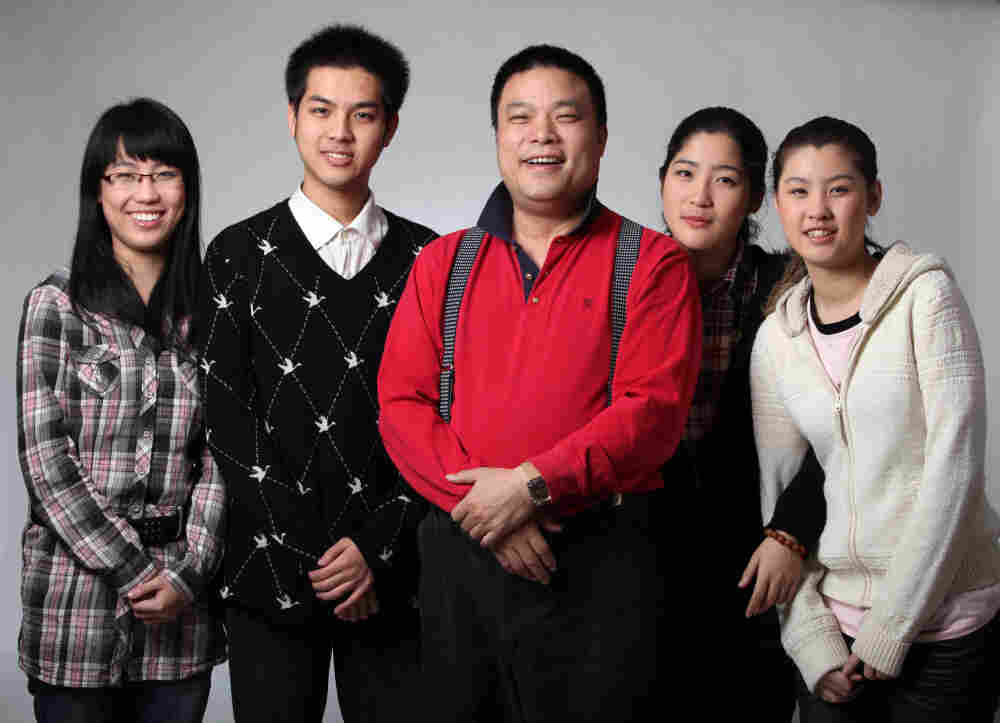 Wolf Dad Xiao Baiyou is shown in this publicity image with his four children, three of whom go to Peking University. He believes this is due to his method of beating his kids. The youngest is 16 and is hoping to study music at China's Central Conservatory of Music. Courtesy of Xiao Baiyou hide caption

Tiger Mother Amy Chua, the superstrict Chinese-American disciplinarian, became an overnight sensation in the U.S. this year when she wrote about her tough parenting style. But she looks like a pussy cat next to her mainland Chinese equivalent, "Wolf Dad" Xiao Baiyou.

Xiao is the latest media sensation in China — a father who not only beat his son and three daughters, but boasts about how he did it.

He's become part of a wider debate in China about the politics of family life, which has also been fueled by a homemade pamplet produced by two Tiger Cubs that turned. 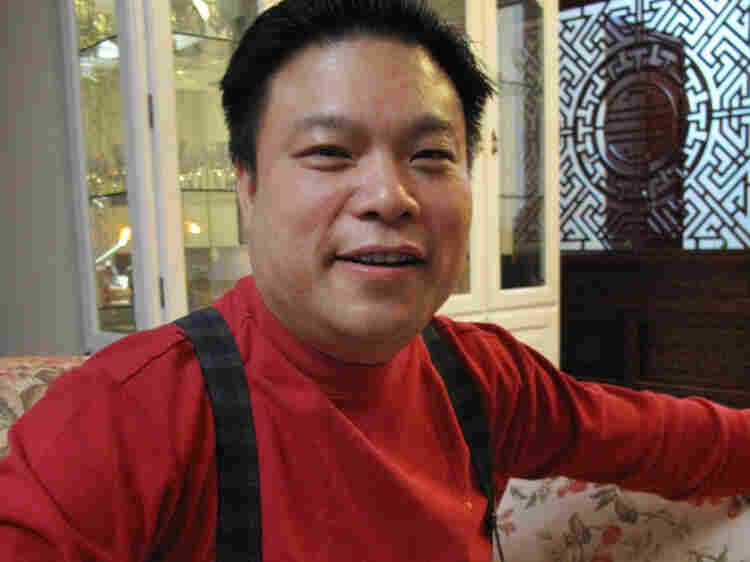 Wolf Dad Xiao Baiyou at home, where he drew up more than a thousand rules for his kids. Any transgression earned the kids a beating with a feather duster, either on the legs or on the palm of the hand. Louisa Lim/NPR hide caption

He's been doing the chat shows lately, laying out his system for getting three of his four kids into China's top school, Peking University.

Xiao, 47, describes himself as the emperor of his family. As such, he's laid down an extraordinary system of rules for his children.

"I have more than a thousand rules: specific detailed rules about how to hold your chopsticks and your bowl, how to pick up food, how to hold a cup, how to sleep, how to cover yourself with a quilt," Xiao says. "If you don't follow the rules, then I must beat you."

In China, beating kids is part of their upbringing. It's not violence. It's not against the law.

For each violation of the rules, such as sleeping in the wrong position, the penalty is to be hit with a feather duster on the legs or the palm of the hand. If it doesn't leave a mark, then it won't make an impact, Xiao says.

Never mind sleepovers, his kids weren't even allowed friends. He started beating them when they were 3 years old, and stopped at age 12.

"From 3 to 12, kids are mainly animals," he says. "Their humanity and social nature still aren't complete. So you have to use Pavlovian methods to educate them."

Xiao's method involved all of the children watching each punishment. Any transgression of the rules by a younger sibling would also earn a beating for the older siblings, for failing to be a good model. Despite the sometimes daily beatings, Xiao sees himself as the best dad in the world and repeatedly claims his unorthodox methods "have no shortcomings."

Xiao's oldest child, 22-year-old Xiao Yao, has his doubts about his father's methods. "Though Dad likes using traditional educational methods, he may not fully understand the exact forms and he chose his own way," he told a TV program. "There may be some distance from the best results." 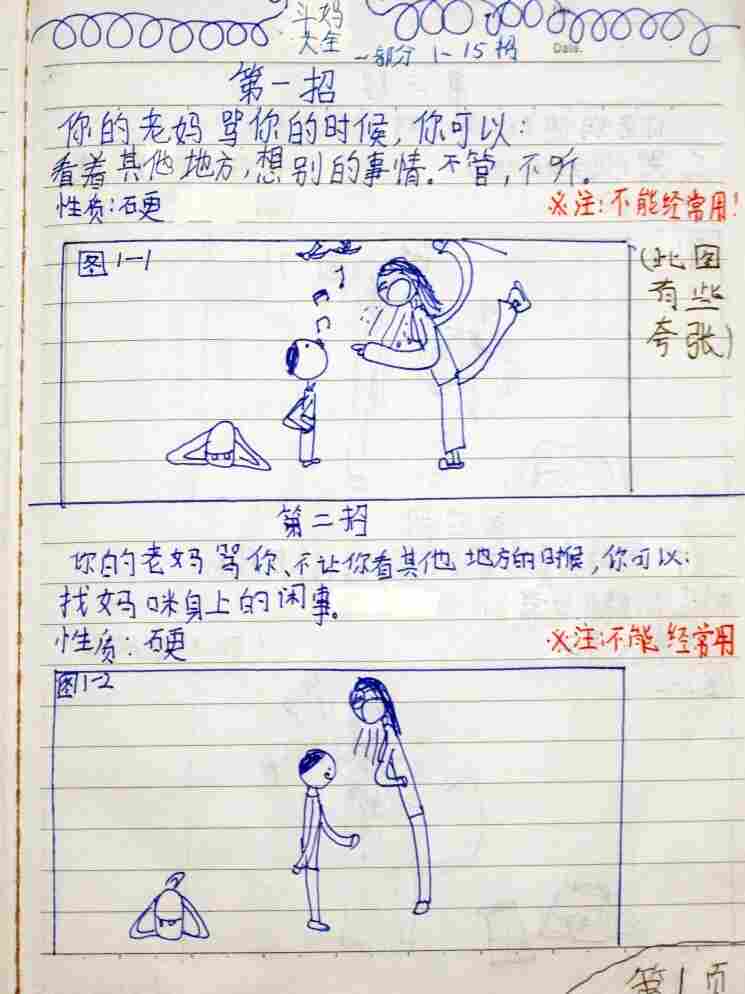 This is the drawing on the first page of The Complete Book of Combat With Mum, which Chen Leshui's dad posted online. Louisa Lim/NPR hide caption 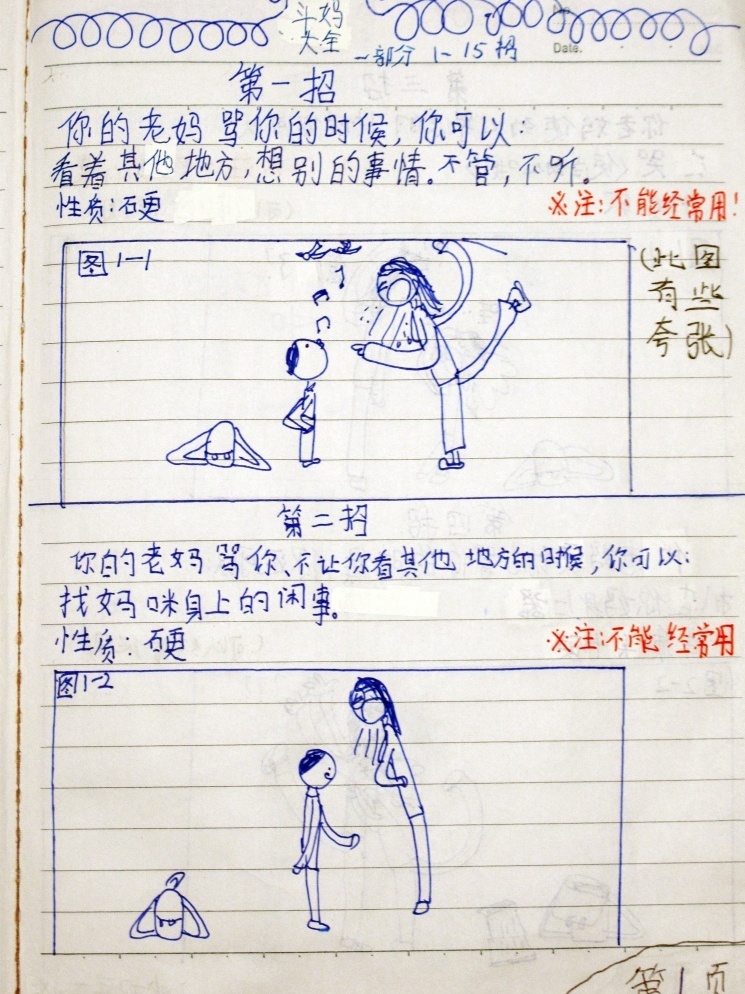 This is the drawing on the first page of The Complete Book of Combat With Mum, which Chen Leshui's dad posted online.

He's quoted as saying that he doubts he even had a childhood, and that he loves and hates his father at the same time.

"I thought that maybe he was a bit too strict, that sometimes it could have been more relaxed," Xiao's wife, Huang Tianshu, told NPR. "Maybe they didn't need to be beaten quite so often."

Huang is from Hong Kong, and therefore the couple was not subject to China's strict one-child policy. She insists her kids do not have any psychological scars from their childhood beatings.

"I thought we were quite happy, but maybe after the kids grow up they only remember the unhappy things," she says. "I think the education they received was right."

In many countries, Wolf Dad's behavior would be seen as child abuse, but Xiao denies that.

"In China, beating kids is part of their upbringing. It's not violence. It's not against the law," he says. "If this kind of beating is legal, scientific and in the interests of the kids, then fine. I'm all for beating, since it's effective."

Wolf Dad has his share of critics, but his book has been flying off the shelves — so far, 120,000 have been printed, and he says most have been sold.

The Cubs Can Fight Back

A contrasting book has sharpened the debate in China. It's a small, scrappy exercise book filled with primitive line drawings. The Complete Book of Combat With Mum contains 20 strategies to deflect a scolding from your mother — and was written by two Beijing 10-year olds.

"Move No. 4 is useful. You run to Mom and throw yourself on her," says Chen Leshui, who wrote the book. "Lots of kids say they use this because it makes Mom's heart go soft, and it makes her cry."

Leshui says she wrote the book with her friend Deng Xinyi after a particularly humiliating incident.

"Once, when I didn't do so well in an exam, a friend came over to play, and my mom picked up my exam paper and said, 'Your friends will all laugh at you,' " Leshui says. "My friend and I went to hide in my room and drew these pictures on pieces of paper."

The moves are divided into hard and soft tactics, though Leshui warns that hard tactics should be used sparingly, or you might get a beating. Her mother, who gives her name as Mrs. Li, says Leshui has tried literally every trick in the book.

"There was one move she used to make when she was young: She'd pull down her pants, then present me with her naked butt and say, 'Spank me, mom!' " Li says. "Later, if I scolded her, she'd hug my legs and not let go. And when she got even older, she'd lock herself into her room and write notes to me on slips of paper."

Xiao, the Wolf Dad, praises Leshui's talent, but says her parents are leading her astray. Online, there are those who call her "a bad influence," and say that posting the book online was "a sin." But the book went viral after her dad — who gives his name as Mr. Chen — posted it on the Chinese version of Twitter. He admits he's not a traditional Chinese dad.

"Mostly we respect her decisions and treat her as an equal. Chinese parents like one adjective: 'good' or 'obedient,' " Chen says. "I don't want her to be an obedient child. It just means you're in the system, you can only follow orders. It's only when you think outside the box that you can become creative."

As for the stories of Tiger Mother forcing her kids to practice piano without bathroom breaks or dinner until they get it right, well that doesn't happen in Leshui's house. She plays the guzheng — a kind of Chinese harp — and practices about 40 minutes a night by herself.

It's pretty clear Leshui is a good kid. Despite her guide to getting around her mom, neither she nor her mother can even remember the last time she was scolded, let alone beaten.