Accessibility links
More Saying 'I Don't' To Marriage Marriage — it's so last century. A new report out on Wednesday finds the share of all U.S. adults who are married has dropped to its lowest on record, at just 51 percent. If the trend continues, the institution will soon lose its majority status in American life. 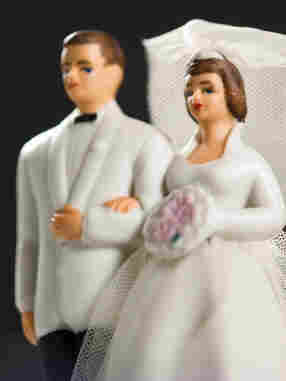 Marriage — it's so last century. A new report finds that the share of all U.S. adults who are married has dropped to its lowest on record. iStockphoto.com hide caption

The share of all U.S. adults who are married has dropped to a record low 51 percent, according to a new report. If the trend continues, the institution will soon lose its majority status in American life.

The report being released Wednesday by the Pew Research Center finds new marriages dropped a sharp 5 percent last year, which is very likely related to the bad economy. Pew senior writer D'Vera Cohn says it fits with a larger trend.

"The most dramatic statistics to me are when you look at the share of younger adults who are married now compared with in the past. That's really been where you've seen the big decline," Cohn says.

Half a century ago, nearly 60 percent of 18- to 29-year-olds were married. Today, it's just 20 percent. But the Pew report finds fewer married people across all age groups.

In their place: more singles, single parents, couples living together — many having children without marrying. In fact, some 40 percent of all U.S. births are now to unmarried mothers. But the driving force in the dropping marriage rate? People who do tie the knot are waiting longer than ever.

The Pew report finds the median age when people finally walk down the aisle is at an all-time high — 26 for women and nearly 29 for men. And it's higher still for the college educated.

Based on adults 18 and older. Percents may not total 100 percent due to rounding.

"Well, it does not mean that marriage is dead," says Stephanie Coontz, a historian on family life at Evergreen State College in Washington state. She says many of those 20-somethings will eventually tie the knot. The Pew report finds a robust 72 percent of Americans have been married at some point.

"But what it does bring home to us is that we can no longer pretend that marriage is the central organizing principle of society. We have to take account of the many, many social networks and relationships that people cycle through, marriage being just one of them," Coontz says.

Cohn says you already see this — school forms with separate address blocks for "Parent 1" and "Parent 2," or employers asked about benefits for unmarried partners. Yet even as marriage declines, Cohn says, Americans still revere it.

[W]hat it does bring home to us is that we can no longer pretend that marriage is the central organizing principle of society.

"On the one hand, we had nearly 40 percent of Americans tell us they think marriage is becoming obsolete. On the other hand, when you ask people who aren't married, 'Would you like to get married?' they say yes," Cohn says.

Cohn says Wednesday's report also points to a troubling marriage gap — the rich get hitched; the working class, not as much. Historian Coontz says it's yet another consequence of the nation's widening economic inequality. Wages for those without a college degree have stagnated, weakening their power in the marriage market.

"The sort of incentive to get married — because you could rely on a man whose real wages would continue to rise, who would get a pension at the end of it — that incentive has been undermined as well," Coontz says.

On the other hand, for those who do marry, there's an upside to waiting, at least for women. Coontz says for every year a woman delays marriage — into her early 30s — she reduces her risk of divorce.