Accessibility links
In Cuba, Dial-Up Internet Is A Luxury Many Cubans have been dreaming of greater Internet access for years. But for now, it remains one of the world's least connected countries. 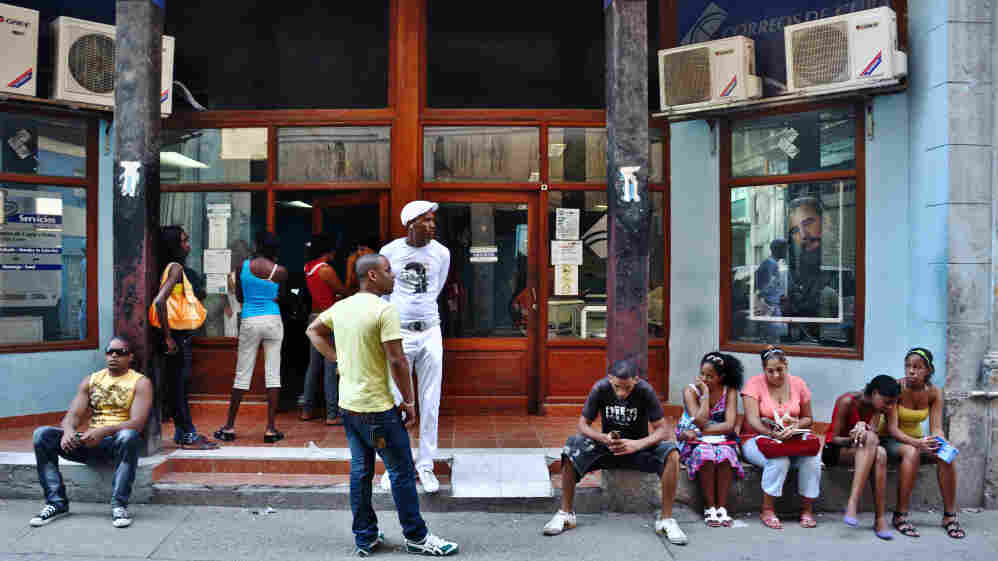 Cubans wait to go online at an Internet cafe in Havana earlier this year. The Cuban government announced months ago that a new fiber-optic cable to Venezuela would improve Internet access and speeds, but that still hasn't happened. STR/AFP/Getty Images hide caption 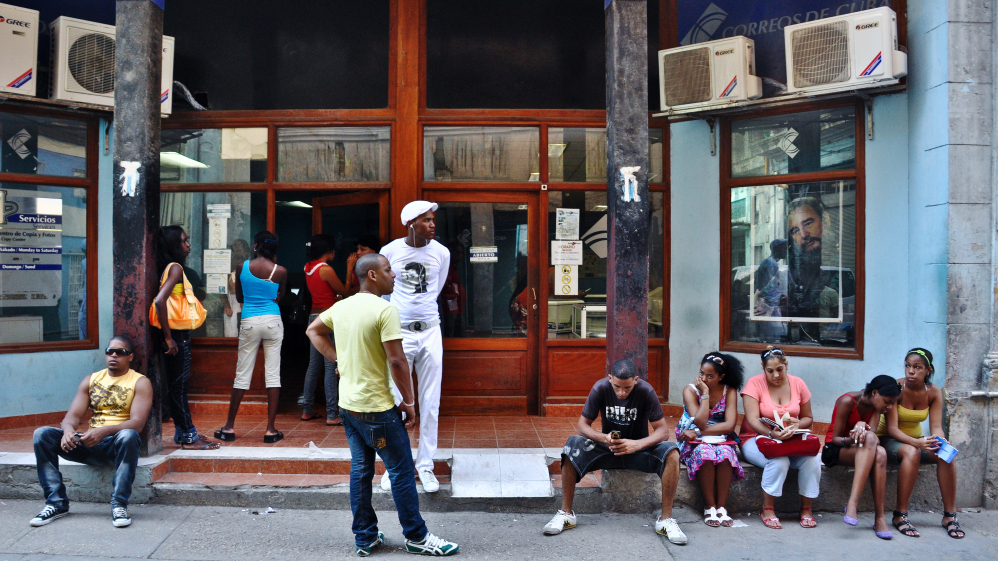 Cubans wait to go online at an Internet cafe in Havana earlier this year. The Cuban government announced months ago that a new fiber-optic cable to Venezuela would improve Internet access and speeds, but that still hasn't happened.

Cuba is one of the least-connected countries in the world, a time-warped place where millions of young people have never been online and a dial-up Internet account is the stuff of dreams.

An undersea fiber-optic cable linking the island to Venezuela was supposed to change that this year. But six months after its completion, frustrated Cubans are still starved for Web access.

Watching government-run television newscasts in Cuba is often a strange experience, but especially so when the topic is social media. Consider a recent report about Facebook and Twitter: The Castro government wasn't telling Cubans those sites are something to fear — it was actually the opposite.

The young reporter sat with a laptop and, without a hint of irony, extolled the virtues of social networking as a source of real-time alternative information. But given the low level of Internet access here, she may as well be describing the surface of the moon.

There are other strange sights on the island, like Cubans carrying new iPhones and BlackBerrys brought in from Miami or Madrid, which only work in Cuba for talking and texting.

Some Cubans have brand-new laptops bought on the black market or sent from relatives abroad, but no Web access. So they stand outside condo buildings that house foreign businessmen, trying to catch an open Wi-Fi signal.

Then there are cybercafes that are woefully short on the "cyber" part. At one such cafe in Havana, young Cubans line up to pay $1.50 an hour to send and receive email. A snap poll of a dozen would-be Web users found only two people who said they'd ever been online.

One was 27-year-old Hamlet Chirino, who saves up each month to pay $6 an hour for Internet use at a tourist hotel. His other option is to go to underground cafes that offer black-market Web access over slow dial-up connections.

"Life is really good here," Chirino said, "but low salaries and the lack of Internet access are the two biggest problems. The government has been saying they're going to change those things for a long time, but we're still waiting."

Cuban authorities raised expectations earlier this year when they announced the completion of a $70 million data cable linking the island to Venezuela, boosting Cuba's bandwidth by a factor of 3,000.

But Web access remains as slow and scarce as ever, with no evidence of any urgency to get the cable working. Rumors swirl about technical problems or bad business deals, with others speculating that Cuban authorities have been spooked by the Arab Spring and the central role that social media has played in it.

There's been no official explanation, leaving 20-year-old Jessica Cruz saying she thinks she won't get online until the Castro government is gone.

"There's a saying here that flies can't get into a closed mouth," says Cruz, reflecting the view of many young Cubans who see a paternalistic government trying to deprive them of outside information.

Cuba's lack of Internet access is now a central theme in the 50-year standoff with the United States.

First the U.S. trade embargo kept the island cut off, Cuba says, and now Washington wants to use the Internet as a tool of subversion.

A U.S. government subcontractor, Alan Gross, has been in jail here for two years for trying to set up satellite Web access on the island outside of government control. And a small contingent of dissident Cuban Web activists has made Internet freedom one of their central causes. Blogger Orlando Luis Pardo says the government can't hold back the tide forever.

"In my opinion, that battle is lost. Not because the opposition or the independent bloggers are especially strong or very widely known by the Cuban people, but because the official information in the official media is very poor, it's very solemn, very unbelievable," he said.

A new Cuban government website called The Social Network could hold a clue to where things may be headed. The site is such a blatant copy of Facebook that it even has the word "Facebook" in its Web address.

But there is one big difference: The Cuban version only connects to other users on the island — not to the wider world.