Accessibility links
Christian McBride And Inside Straight On JazzSet At the Detroit Jazz Festival, bassist Christian McBride leads a five-piece band in front of thousands of fans. The band performs McBride originals, plus tunes from Freddie Hubbard and Duke Ellington.

57:59
Christian McBride And Inside Straight On JazzSet 57:59 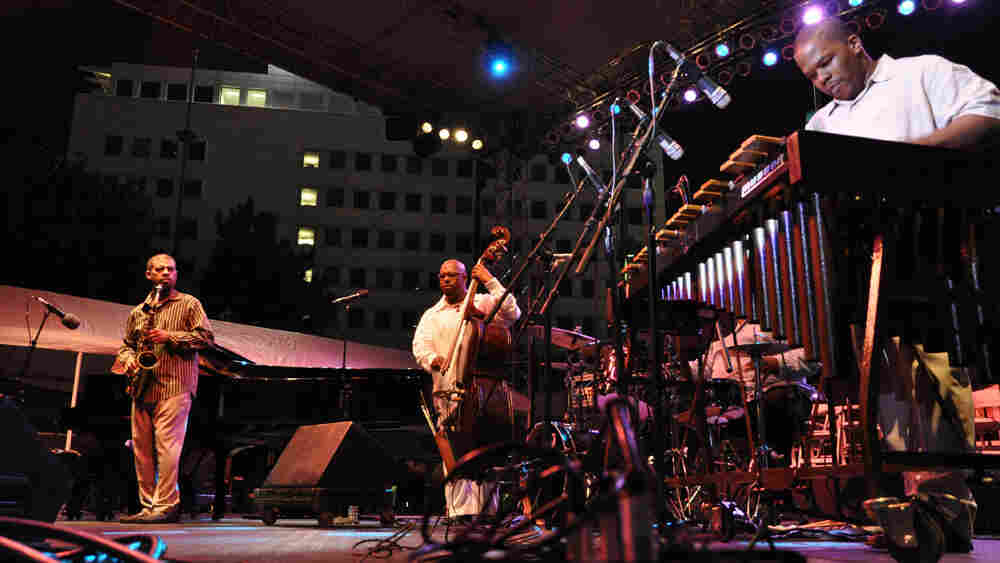 Rhonda Hamilton, guest-hosting for Dee Dee Bridgewater, is onstage at the 30th annual Detroit International Jazz Festival. She introduces Christian McBride as "the premier bass player of his generation." All in the huge Motor City crowd cheer for that.

Born in Philadelphia on May 31, 1972, McBride showed up in New York in the late 1980s, full of youth and charisma and ready to play. His first big-time employer was Freddie Hubbard. A 1993 JazzSet from the Boston Globe Jazz Fest featured McBride in "Three Musicians" with peers Joshua Redman and Geoff Keezer; later, a drum teacher at Manhattan School of Music used that set in class to illustrate how a drummer-less band can play with a whole lot of rhythm.

Besides great tone and time, and people skills to match his musical ones, McBride knows a wealth of jazz, soul and R&B recordings note for note. Party with him to a soundtrack from his iPod, and you'll see him perform those solos with the original moves. McBride is an authority on James Brown, too.

In 2010, McBride works regularly — constantly — with Chick Corea and Pat Metheny. His own big band is up and running. He is Artistic Director of Jazz Aspen Snowmass Academy in the summer, and co-directs the Jazz Museum in Harlem year-round. He interviews musicians on his show, The Lowdown: Conversations With Christian, on Sirius/XM Radio. He blogs, loves sports with a passion and — coming after John Clayton in 2008 — McBride is the second consecutive bass-playing artist in residence at the Detroit Jazz Festival.

With a big smile, McBride calls out from the stage, "Now, what other festival on this planet would have two bass players back to back as artists in residence? Can you get better than that?"

"Rainbow Wheel" is dedicated to Mac users. "Theme for Kareem" is Hubbard's tune from the 1978 album Super-Blue. "Stick and Move" is for boxing fans and features Steve Wilson on alto vs. Warren Wolf on vibes. You know Wilson from many JazzSet shows, while Wolf, from Baltimore, is an exciting newcomer.

Rhonda Hamilton hosts Sing the Truth! from the 2011 Detroit Jazz Festival at 12:30 Eastern Time on Toast of the Nation, New Year's Eve from NPR Music.

Recording by Timothy Powell of Metro Mobile; Surround Sound remix by Duke Markos. Thanks to Terri Pontremoli, executive and artistic director of the Detroit Jazz Festival every Labor Day weekend in the Motor City.