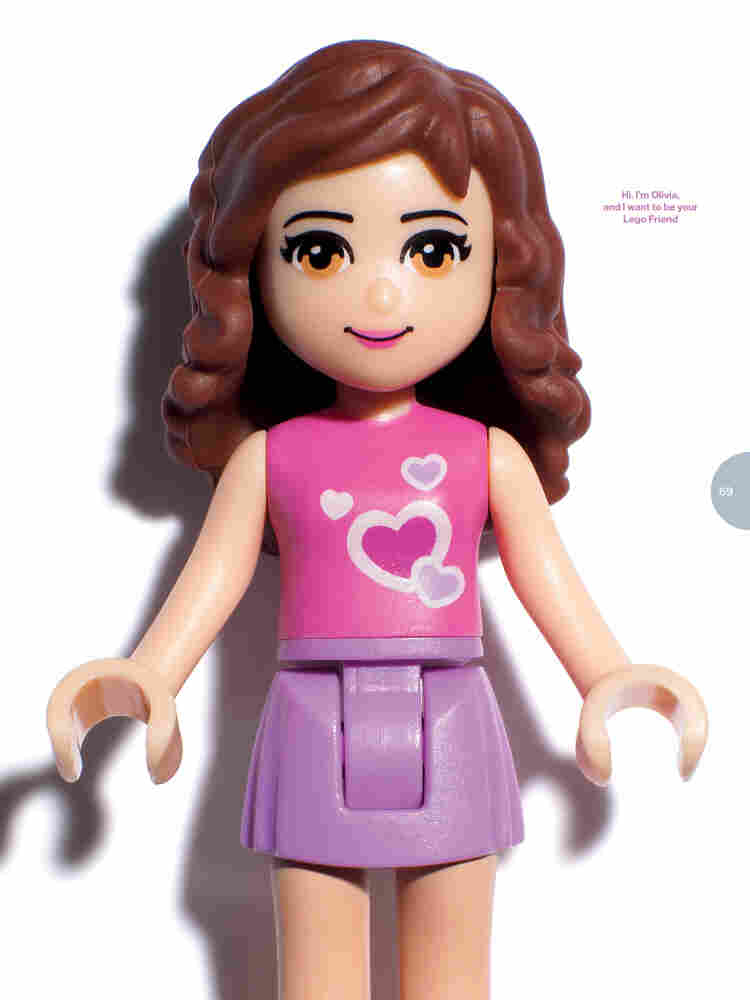 The new Lego Friends toys are not yet public, but the company gave a sneak peek at its "Olivia" minifigure from the set. Courtesy of Bloomberg Businessweek. Photographed by Nick Ferrari hide caption 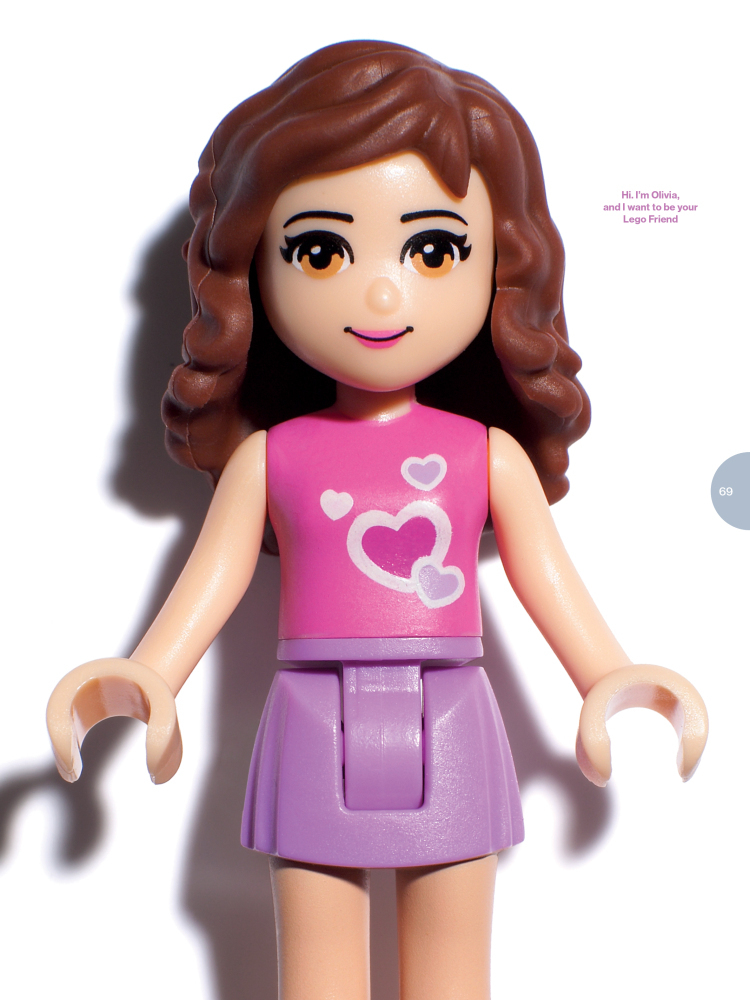 The new Lego Friends toys are not yet public, but the company gave a sneak peek at its "Olivia" minifigure from the set.

Lego doesn't call itself a toy company for boys. But look at the company's website, and its products are clearly geared towards boys' love of combat and action. There's Lego Star Wars, Lego Indiana Jones, Alien Conquest, Racers and Superheroes. One lonely set, called Belleville, is clearly for girls. It's pink-themed and features a horse.

It's not all Lego's fault: The age of 4, when kids are aging into Lego's smaller brick sets, instead of the large Duplo bricks aimed at preschoolers, is also around the time that children become more conscious of gender, and about how to define themselves. So, many girls veer into the world of princesses, while boys leap into Lego.

But Lego also consciously aimed for boy customers when it embarked on its stunning turnaround. Boys were easier to sell to than girls. And it worked. Growth has been in the double digits; U.S. sales last year topped $1 billion.

On steadier footing now, the company is making a new effort to break into the girls' market.

Bradley Wieners, executive editor at Bloomberg Businessweek magazine, got the scoop on the new girls' toys, which will hit store shelves this January. He told Morning Edition's Steve Inskeep that Lego took an anthropological approach when designing the new girl Legos.

The company embedded researchers with families around the world, to shadow girls and boys and watch how they play. Based on this research, it came up with Lego Friends, a line that features five characters with back stories similar to those of the wildly popular American Girl dolls.

"This is the most significant strategic launch we've done in a decade," Lego CEO Jorgen Knudstorp told Wieners, in an article on the new line of toys. "We want to reach the other 50 percent of the world's children."

The researchers found that girls do not like the iconic, chunky Lego minifigure. So the company designed a new one that's slightly bigger than the traditional 1 1/2-inch figure, to make it easier for girls to put hairbrushes and handbags in the minifigures' hands.

Another thing learned from the researchers was that while boys and girls both love to build, boys build in a linear fashion, assembling the kits from start to finish and not stopping until the toy looks like what's on the cover of the box.

In contrast, girls like to stop along the way, and start role-playing while they are building. So, Wieners says, Lego bagged the girls' toys differently, so they can begin playing before finishing the whole model.

The new Lego girl minifigures have names like Stephanie, Olivia, and Emma, and the building sets include a veterinary clinic, a hairdressing salon, a horse academy and a clinic. New colors for the bricks include lavender, light blue and other pastel colors.

"They're definitely running a risk here of reinforcing some stereotypes, even as they try to break down the ones about girls building," Wieners says.

The new toys may flop, like previous efforts. But they're being introduced with a $40 million marketing campaign.

If the new toys do take off with girls and find a permanent place alongside Barbie and American Girl, Lego's CEO will have deftly carved out a whole new area of growth and achieved something his predecessors have so far been unable to do.