Accessibility links
Bradley Manning To Appear In Court In WikiLeaks Case Supporters say the Army private is a whistle-blower and a hero, but prosecutors will make the case that Manning is responsible for one of the biggest leaks in decades. During the proceedings, which begin Friday at Fort Meade, Md., both sides have an opportunity to make their case. 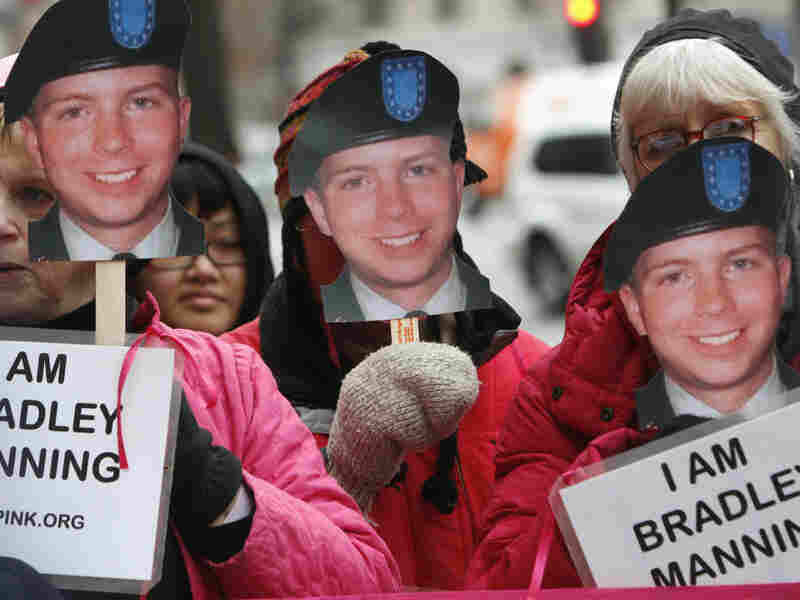 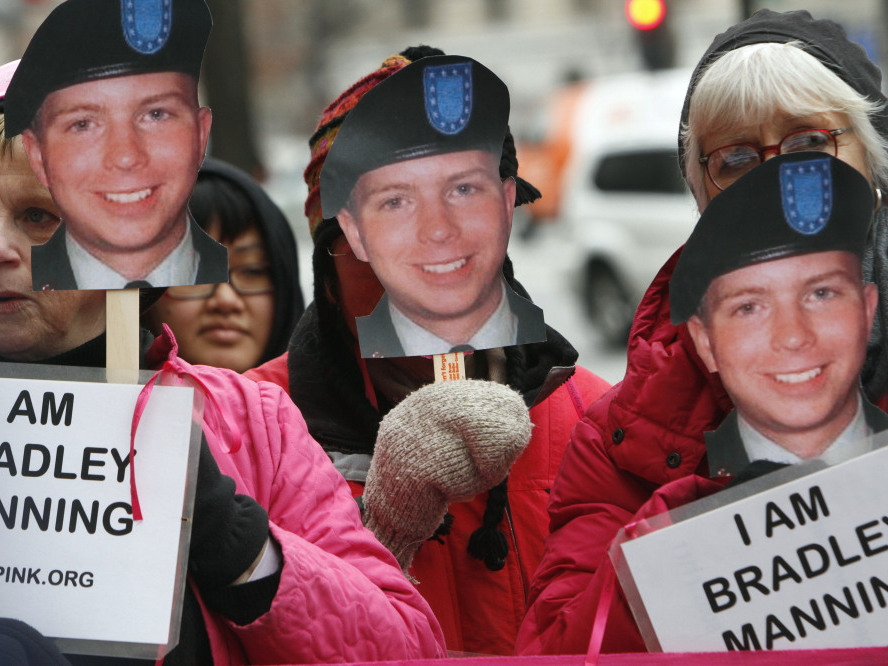 Supporters say Army Pfc. Bradley Manning doesn't belong in a courtroom at all. They think he's a whistle-blower — and a hero.

Eighteen months after his arrest on suspicion of leaking national secrets, Manning will finally make his first appearance in court Friday at Fort Meade, Md., just north of Washington, D.C.

When he worked in Iraq, Manning allegedly downloaded thousands of war logs and diplomatic cables and shared them with the website WikiLeaks. He faces 22 criminal charges that could keep him behind bars for life.

When the leak was discovered in 2010, public outcry was swift and in some cases extreme, even before authorities pointed to a suspect.

"Whoever in our government leaked that information is guilty of treason, and I think anything less than execution is too kind a penalty," said former Arkansas Gov. Mike Huckabee, now a Fox News host.

Since then, tempers have cooled, at least a bit.

Military prosecutors say they won't seek the most serious penalty — death — for Manning.

However, starting Friday, they'll present evidence in a military court that Manning is responsible for one of the biggest leaks in decades. They'll argue he downloaded national secrets onto what looked like a Lady Gaga CD, and then he passed those documents to WikiLeaks.

It's the start of what's known as an Article 32 proceeding, the run-up to a court-martial. The procedure is similar to a grand jury in an ordinary court, with one important exception, says Eugene Fidell, who teaches military law.

"The unusual thing about an Article 32 investigation is that both sides get heard," he says.

So, over the course of the next several days, military prosecutors will present testimony from witnesses, and defense lawyers for Manning will have a chance to cross-examine them.

"We know that the defense would like to make this process as painful for the government as possible, perhaps as a way of getting the government to take a different position with respect to Manning and the charges," Fidell says.

Manning's civilian lawyer, David Coombs, has tried without success to get high-level government officials to testify. He wants them to say that the secrets Manning allegedly disclosed didn't cause any damage to national security.

He also wants to shine a spotlight on what he calls the rough treatment Manning received when he was locked up in a brig in Quantico, Va. Kevin Zeese of the Bradley Manning Support Network describes the treatment as punitive and cruel.

"He was going through some periods of forced nudity, denial of all access to books, and had guards outside his door all the time, forced to stand nude to get his clothes back in the morning, kept in uncomfortable positions at night," he says.

Those conditions prompted an international outcry and an ongoing human rights investigation.

Zeese will rally with other supporters near the site of the court hearing at Fort Meade to bring attention to a prosecution he says is wrong.

"The documents that were involved in this case were low-level secrets. Most of them shouldn't have even been secrets," he says.

In fact, that dispute over levels of secrecy is likely to pervade the military hearing.

Fidell, who teaches military law, says the presumption in an Article 32 hearing leans toward openness.

"So one of the challenging tasks before the investigating officer is going to be to decide how to use that scalpel — how to keep as small as possible the parts of the hearing that concern classified information," he says.

There's another thing that will hover over the hearing, Fidell says: the role of WikiLeaks' founder, Julian Assange.

"He's sort of the ghost at the banquet. He's not going to be there, obviously. He's still stuck in England. But his presence is everywhere in this," Fidell says.

The investigating officer will make a recommendation about the next phase in Manning's case sometime next year.