Accessibility links
Chet Atkins: The Lasting Influence Of 'Mr. Guitar' Atkins climbed from humble beginnings to become a major record producer and one of the most famous guitarists of his era. Ten years after his death, he's the subject of continued adoration — and a new exhibition at Nashville's Country Music Hall of Fame and Museum. 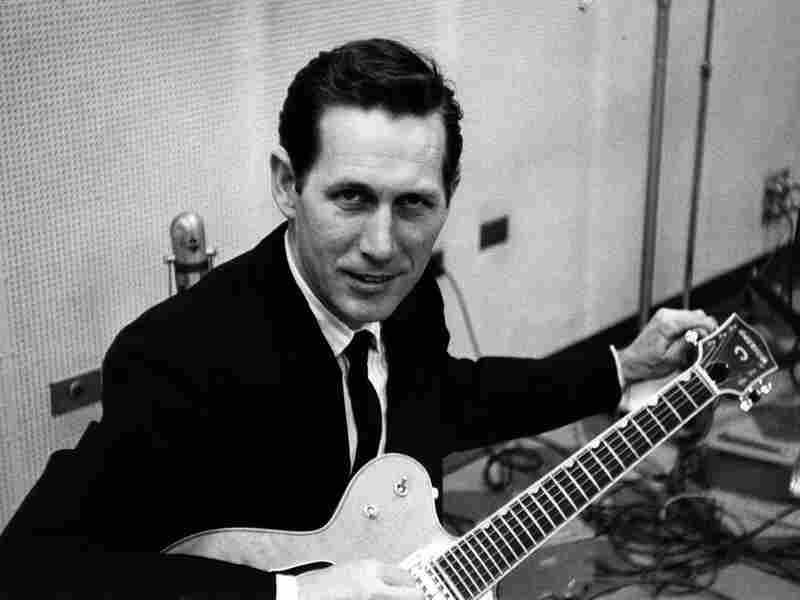 Chet Atkins at RCA's Studio B in the 1960s. Courtesy of the Country Music Hall of Fame hide caption

toggle caption
Courtesy of the Country Music Hall of Fame 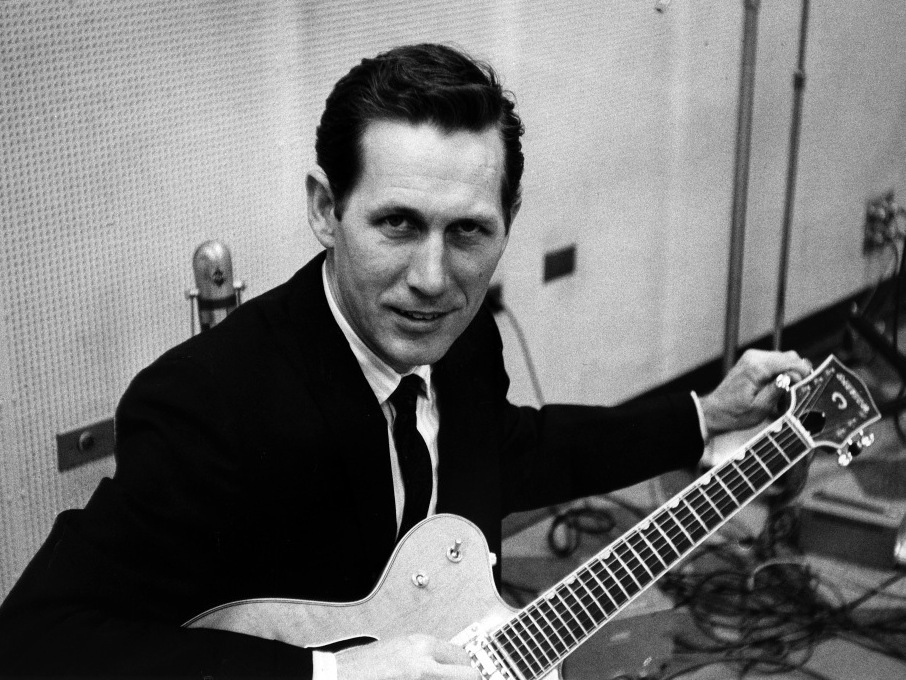 Courtesy of the Country Music Hall of Fame

Chet Atkins is no longer the household name he was in the 1960s, when he was all over TV and radio with his guitar. But every year, the Chet Atkins Appreciation Society packs a Nashville hotel. This year's gathering was the 27th.

"I saw the list of countries this year, and it's like New Zealand, Japan, Poland," says Pat Kirtley. "And the common bond is the music of Chet Atkins."

Kirtley has performed at Chet Atkins Days for 22 years. He's a veteran finger-style guitarist who attributes the very possibility of his career to Atkins.

Even to this day, young devotees are embracing Atkins' style. Ben Hall, a 22-year-old from Okolona, Miss., showcased at this year's convention. Hall uses the tricky right-hand technique that Atkins adopted from Kentuckian Merle Travis and refined in the 1940s and '50s.

"It revolves around a bass note," Hall says. "The fingers ... Merle used one, Chet thought Merle was using two. So he used two and three and sometimes a handful of fingers. They play the melody. And there's famous stories of so many great guitar players along the way who play other styles listening to this and saying, 'I had no idea that's one instrument.' "

Atkins made his first solo recordings in the mid-1940s, but it would take him until 1955 to land his first hit, "Mr. Sandman." He was 31 by then, and more than a decade into his professional career. Born in the Appalachian town of Luttrell, Tenn., he'd acquired a hard-to-play Sears Silvertone acoustic guitar when he was about 10 years old.

Chet Atkins performs on the Grand Ole Opry in 1956.

Inspired by Travis and jazz guitarists George Barnes and Django Reinhardt, Atkins practiced obsessively in high school and then sought work. Carolyn Tate, chief curator of the Country Music Hall of Fame and Museum exhibition, says it was a struggle at first.

"He knocked around on the radio circuit for a good long while," Tate says. "Your radio popularity in those days was based on the number of cards and letters that you got in. And he was just so shy, nobody was writing in for him — and so when times got tough, they would get rid of Chet."

Then, a connection with one of the seminal early country-music groups changed everything. Atkins began backing up The Carter Family (then known as The Carter Sisters) at the end of the 1940s. When the Carters were asked to join the Grand Ole Opry in 1950, Atkins came with them and quickly established himself in Nashville's new recording scene. He backed Hank Williams in "Cold, Cold Heart" and Elvis in "Heartbreak Hotel." And on records like Jazz from the Hills in 1952, Atkins and his fellow Music Row pickers breached the limits of country sessions and swung with the best of them.

"He'd launch into some kind of brand-new jazz style of playing or something that nobody had ever heard before, all because of all the things that had entered his head up to that point," Hall says.

Hall says Atkins was open to all the great music of his era, and cites a letter Atkins wrote to his sister from New York City.

"He said, 'I've heard some great music since I've been here. I even heard a guy named Art Tatum — you know, the fellow who plays such fine piano.' That tells you all you need to know about how curious Chet's ears were," Hall says.

Atkins would bring the city to the hills and the hills to the city for the rest of his career. As a recording artist, he made nearly 90 studio albums and released more than 100 singles, featuring intricate arrangements of everything from old fiddle tunes to calypso music to Beatles covers.

Atkins also enjoyed a long, influential career as a music executive. As head of RCA Records in Nashville, he became one of the architects of the so-called Nashville Sound. That fusion of country with string-laden pop rankled some traditional music fans, but it opened up new markets and helped Music City thrive in the 1960s.

Atkins performs on The Johnny Cash Show in 1970, with a poetic introduction from Cash himself.

Tate, the Hall of Fame curator, says the exhibition aims to tell those stories, while also letting visitors glimpse the private Chet Atkins.

"Folks that knew him and went to the house spoke of him being the consummate tinkerer," Tate says. "There were very few of his guitars he hasn't put a drill to or a saw to or put a big hole in it, or just made it his own."

The museum reconstructed Atkins' home workbench and filled it with the voltage testers, vacuum tubes and other things that were on it when he died in 2001. Country star Steve Wariner, a longtime Atkins friend and protege, says it's the perfect unifying symbol.

"I had goose bumps," Wariner says. "It's exactly the way it looked at his house when you walked into his control room."

Wariner recalls bringing over an electrified classical guitar whose bridge had become separated in a hot car. He'd hoped for advice about where to get it fixed.

"And he lays it up on his workbench, loosens the strings and pulls them apart. And he reaches over, and he's grabbing tools," Wariner says. "He takes the bridge off it, and I'm like, 'Oh my god, he took my bridge off.' And he says, 'Just leave it with me.' So Chet fixed it for me. Didn't charge me a penny, of course. And I'm thinking, 'How cool is that? Chet Atkins working on this guitar?' "

Over the last decades of his life, Atkins stepped back from the business and made more time to record and perform — with symphony orchestras, at the White House and at home. When he appeared on Johnny Cash's short-lived variety show in 1970, Cash introduced the legend with a poem he'd written just for the occasion:

The hands of the baker and the candlestick maker
Are those of a skillful man.
The thread of the tailor, the ropes of the sailor
Are tied by knowing hands.
The watchmaker's eye, and the light to see by
And hands that are calm and sure
Make the tiniest springs do the tiniest things
And long has the skill endured.
It matters not the job you've got
As long as you do it well.
The things that are made by plans well-laid
The test of time will tell.
But how can you count or know the amount
Of the value of a man?
By the melodies played and the beauty made
By the touch of Chet Atkins' hands.