Accessibility links
SEC: Mortgage Execs Took Pains To Hide Risky Loans In fraud charges filed Friday, the agency accused six former top executives of Fannie Mae and Freddie Mac of lying about the number of subprime loans on their books. The SEC said the executives knew what was happening and even encouraged the deception. 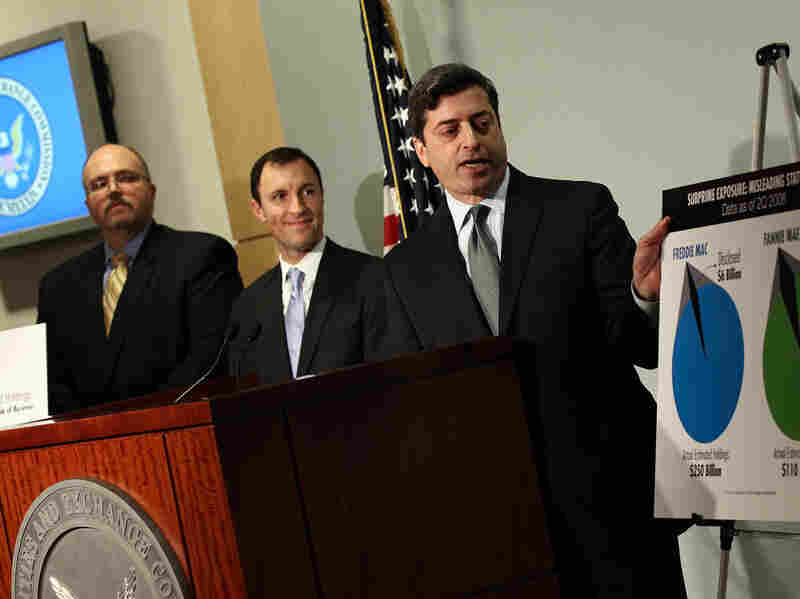 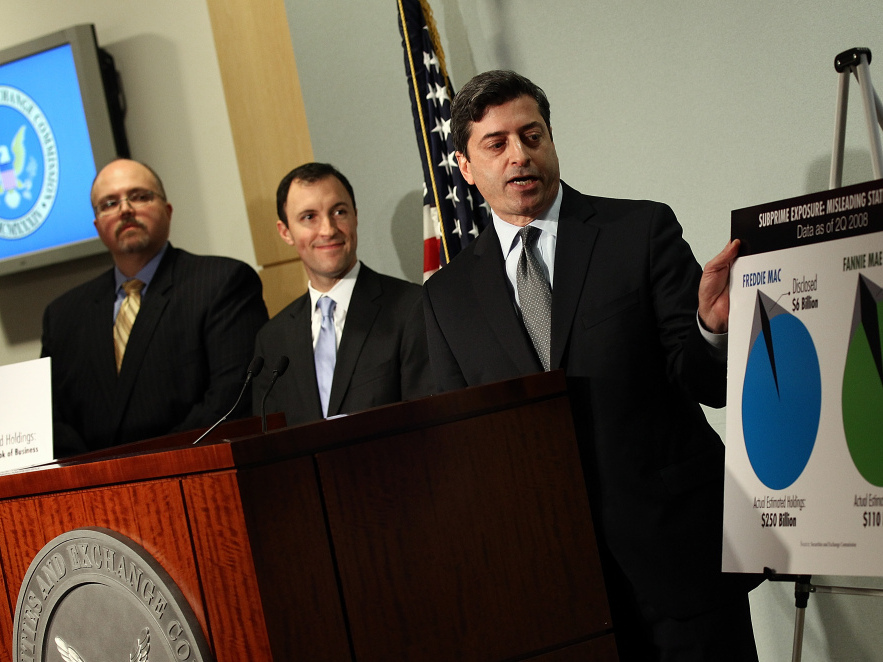 Ever since Fannie Mae and Freddie Mac were taken over by the government in 2008, questions have swirled over who was responsible for their collapse. Friday, the Securities and Exchange Commission weighed in, filing fraud charges against former Fannie Mae CEO Daniel Mudd, former Freddie Mac CEO Richard Syron and four other former executives.

Federal officials say the mortgage giants lied to investors about the number of subprime loans they had on their books at the height of the credit boom. They also say the executives knew what was happening and even encouraged the deception.

The SEC says both companies loaded up their balance sheets with many billions of dollars in risky subprime mortgages. By 2007, investors were starting to ask questions, says Guy Cecala, publisher of Inside Mortgage Finance.

"If investors knew that Fannie Mae and Freddie Mac were effectively engaging in risky behavior, they would have theoretically reduced their holdings of their stock," he says.

So, the SEC says, both companies took pains to conceal their holdings from the public. SEC enforcement director Robert Khuzami said Freddie Mac reported in its 2006 annual report that its subprime holdings were not significant.

"In fact, the company had $141 billion of subprime exposure to loans it internally described as 'subprime' or 'subprime-like,' representing 10 percent of its single-family portfolio as of Dec. 31, 2006," Khuzami said.

He said Syron and his two colleagues at the company were well aware of how risky its portfolio was.

"Despite this knowledge, our complaint asserts that these three executives gave speeches and statements to the investing public that boasted of Freddie Mac's low-risk mortgage loan portfolio," Khuzami said.

The SEC says both companies were selective about what they revealed to investors. Fannie Mae allegedly acknowledged a small number of subprime loans, but failed to tell investors it also held risky Alternative-A mortgages, which require little or no documentation of a borrower's income. SEC officials suggest that these executives had an incentive to mislead investors.

"They're basically saying that the senior executives at Fannie Mae and Freddie Mac during this period consciously withheld this information [from] shareholders because it would hurt the value of the company's stock and hurt the compensation that these executives received," Cecala says.

Mudd and lawyers for Syron issued statements criticizing the SEC. They noted that during their tenure, the companies had repeatedly issued disclosure statements that government regulators had signed off on.

The charges are certain to revive the debate about Fannie Mae's and Freddie Mac's future. Critics have long complained about the hybrid nature of the enterprises, which were chartered by the government as independent companies. Since 2008, the government has assumed control of the companies, and taxpayers have had to pay out more than $150 billion to prop them up.

Susan Wachter is a professor of financial management at the University of Pennsylvania's Wharton School.

"So this has to be solved going forward. I think there's a lot of controversy and discussion about different solutions and how best to resolve the problem," she says, "but the model as it was out there — this is another indicator of how shaky that model was."

Still, Fannie and Freddie continue to play a vital role in the housing market, providing liquidity that makes it easier for banks to issue mortgages. As long as the housing market remains so weak, no one wants to tamper with that model.