Accessibility links
The Arab Spring: A Year Of Revolution A year ago, a Tunisian fruit-seller set himself on fire after being humiliated by a police officer. The event set off uprisings across North Africa and the Middle East known as the Arab Spring. Looking back at the year of mass protests, demonstrations and oustings of heads of state, the question remains: Is life better in the Arab world? 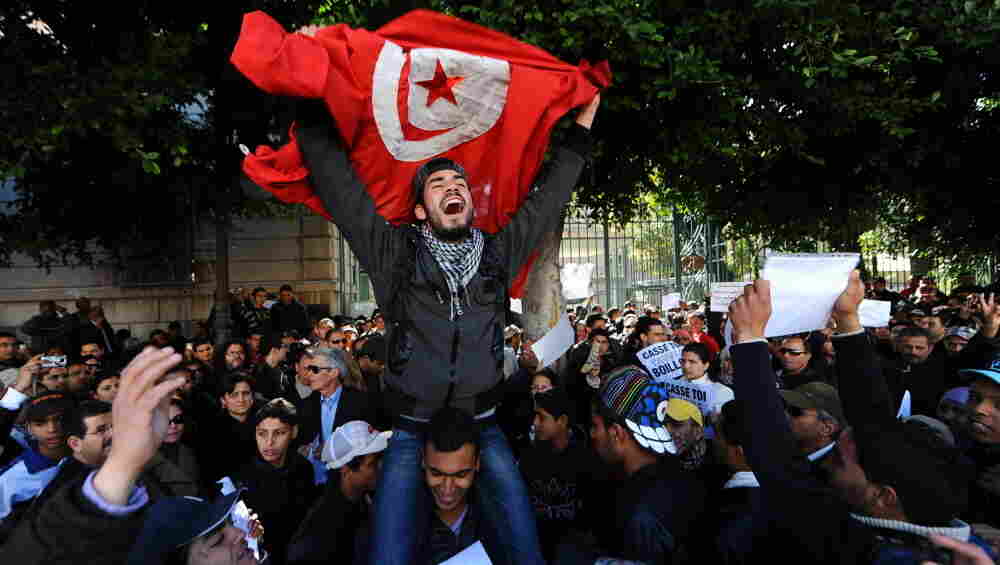 Tunisians protest outside the gates to the French Embassy in Tunis. Arab Spring began in Tunisia when a fruit vendor set himself on fire in protest in front of a government building. Fethi Belaid /AFP/Getty Images hide caption 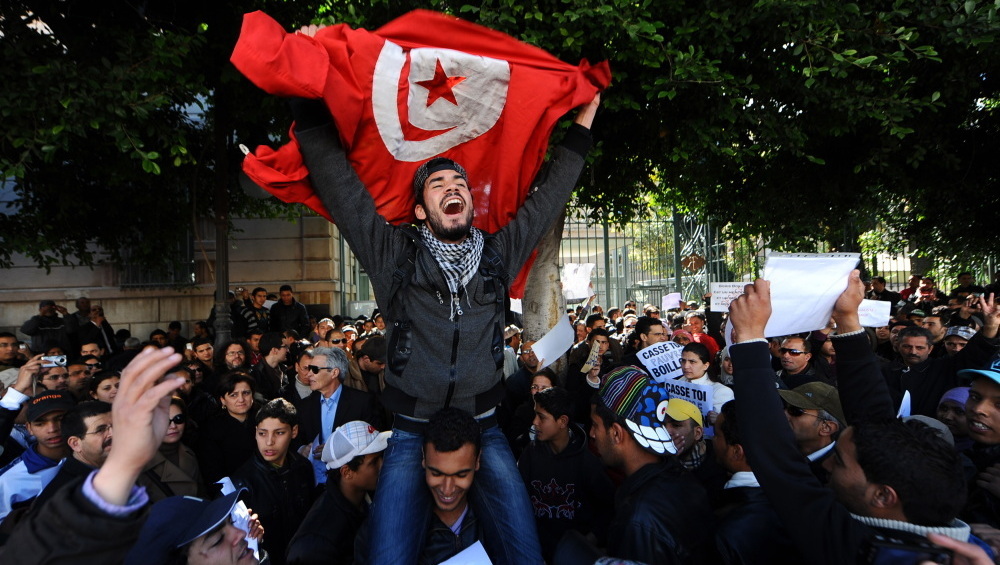 Tunisians protest outside the gates to the French Embassy in Tunis. Arab Spring began in Tunisia when a fruit vendor set himself on fire in protest in front of a government building.

A year ago, 26-year-old Mohamed Bouazizi was getting ready to sell fruits and vegetables in the rural town of Sidi Bouzid, Tunisia.

Bouazizi was the breadwinner for his widowed mother and six siblings, but he didn't have a permit to sell the goods. When the police asked Bouazizi to hand over his wooden cart, he refused and a policewoman allegedly slapped him.

Angered after being publicly humiliated, Bouazizi marched in front of a government building and set himself on fire.

His act of desperation resonated immediately with others in the town. Protests began that day in Sidi Bouzid, captured by cellphone cameras and shared on the Internet.

Within days, protests started popping up across the country, calling upon President Zine El Abidine Ben Ali and his regime to step down. About a month later, he fled.

The momentum in Tunisia set off uprisings across the Middle East that became known as the Arab Spring. A year after the young Tunisian became a martyr, where does the Arab world stand on demands for democracy?

Along with Tunisia, Egypt has been viewed as a victory.

Esraa Abdel Fattah, an Egyptian democracy activist known as "Facebook Girl" for her social media savvy, fought for a new Egypt. She was also an organizer for the major protest in Tahrir Square on Jan. 25. 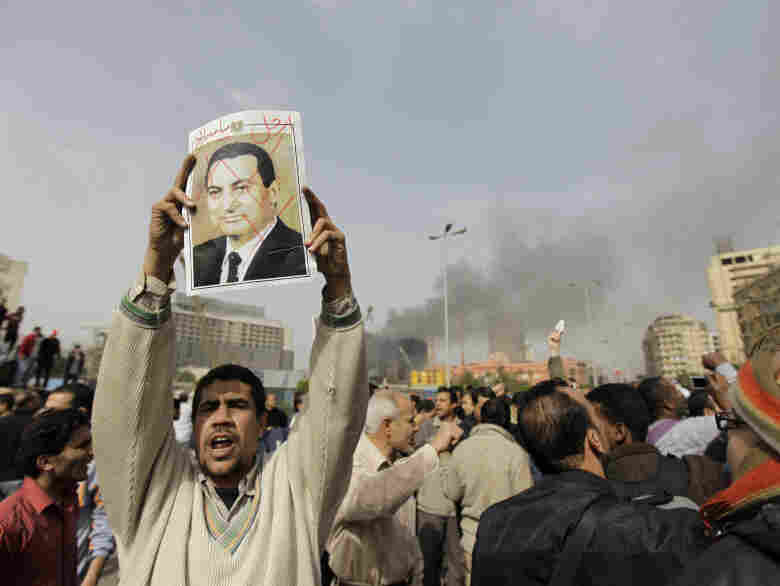 An Egyptian anti-government protester holds a defaced poster of Egyptian President Hosni Mubarak, with the words "Mubarak, get out" written above, during a demonstration in Cairo in January. Ben Curtis/AP hide caption 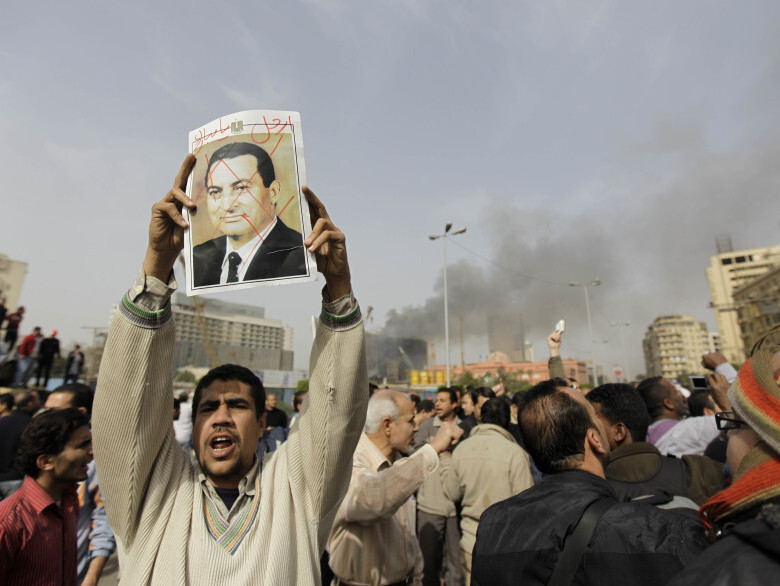 An Egyptian anti-government protester holds a defaced poster of Egyptian President Hosni Mubarak, with the words "Mubarak, get out" written above, during a demonstration in Cairo in January.

When President Honsi Mubarak stepped down, it was thought that Egypt had completed its revolution. But now, as Egypt starts its first round of "free and fair elections," Fattah tells weekends on All Things Considered host Guy Raz that she isn't so sure the work is over.

"Always I am optimistic for the future of Egypt, but now I have some worry," she says. "I think maybe the result of the revolution will take longer than I expected."

Fattah says Egypt is already having major setbacks during this period of transition. And despite Mubarak stepping down, she says, the country is still in the "Mubarak regime" and life is not better than it was a year ago.

Fattah is among those who say the real transition in Egypt will happen when a civilian leader is elected. The recent elections, however, put the Muslim Brotherhood ahead, which perhaps is not exactly what secular activists had in mind.

Shadi Hamid, director of research for the Brookings Institute in Doha, says he doesn't see ascendants of Islamist groups as a pitfall for the Middle East.

"None of this should be surprising," he tells Raz. "Islamists are popular, they're well organized. It was inevitable that they were going to win and dominate in these elections."

Libya: Anti-government protests begin on Feb. 15, 2011, leading to civil war between opposition forces and Moammar Gadhafi loyalists. Tripoli was captured and the government overthrown on Aug. 23. Gadhafi was killed by transition forces on Oct. 20.

Syria: Protests for political reforms have been ongoing since Jan. 26, 2011 with continuing clashes between the Syrian army and protesters. On one day in July, 136 people were killed when Syrian army tanks stormed several cities.

Yemen: Ongoing protests since Feb. 3, 2011. President Ali Abdullah Saleh is injured in an attack on June 4. On Nov. 23, he signs a power-transfer agreement ending his 33-year reign.

Other nations: Protests and uprisings related to the Arab Spring also took place in other countries as well, including: Algeria, Iraq, Jordan, Kuwait, Morocco and Oman.

He says the Arab world is a religiously conservative place and people generally want to see Islam playing an important role in public life.

"They're a reality on the ground and the people have voted them in," he says. "America has to learn to live with political Islam."

Hamid says the U.S. should engage with the Islamist groups to understand them and learn how to work together. The sense in the region, he says, is that the Obama administration has been "on the wrong side of history." Waiting until the last moments to take action and show support for the aspirations of the people is troubling, he says.

"I think in times of historical ferment like these you need strong, bold [and] decisive leadership," he says.

In the year since the beginning of the Arab Spring, leaders have been ousted in Egypt, Tunisia, Libya and Yemen. At the start, it would have been hard to imagine how much the movement would spread throughout the region, Hamid says, but it certainly can't be said that it came out of nowhere.

The revolution had been building up for decades in Egypt, he says.

"I think there was a loss of faith in working within the system, and that's when people began to think more and more about civil disobedience, mass protests [and] going out in to the streets," he says. "When your political process fails you, there's really only one option left."

If storming the streets is the only plan the activists had, then they were at a disadvantage from day one, says Raghida Dergham, a columnist and senior diplomatic correspondent for Al-Hayat, one of the leading daily pan-Arab newspapers.

"When the youths went to Tahrir Square and other places they wanted a modernist future," Dergham says. "Suddenly they were encroached upon by the very well-organized and well-experienced Islamist parties ... and they won the day."

Dergham says people should not prematurely celebrate what is being called "moderate Islam." As long as there is no separation between religion and the state, she says, there will be a huge price to be paid by much of the population in the Arab region — particularly women.

The bottom line, she says, is that the men in power will have the authority to interpret the laws set in sharia, or Islamic law.

"They have the right, in that case, to say what the laws are," she says. "If there [were] any guarantees that there will be a civil constitution that would rule any country where Islamists win the day in elections ... no problem. But I'm afraid that we do not have any such guarantees."

In a recent column, Dergham wrote that the "Arab Awakening will end in the Slumber of Dark Ages" if Arab women fail to take the initiative. She says they should stand up to the Islamists now for the rights of women in the new Arab world.

"These women fought with these young men to bring the change," she says. "They should not be sidelined."

Watching the Arab Spring during the past year, Dergham says, she often feels like she's on a seesaw. One moment she is exhilarated and proud of what has taken place and other times she'll find herself questioning what has been done.

"I am really not clear yet, but I still want to bet on the good day that will be coming after the turbulent times that we are witnessing now," she says.