Accessibility links
Huge Embassy Keeps U.S. Presence In Iraq The American military contingent in Iraq is being replaced by a huge diplomatic contingent. All together, some 16,000 diplomats and private contractors will be working at the embassy in Baghdad and at consulates in Iraq, making it the largest such operation in any country. 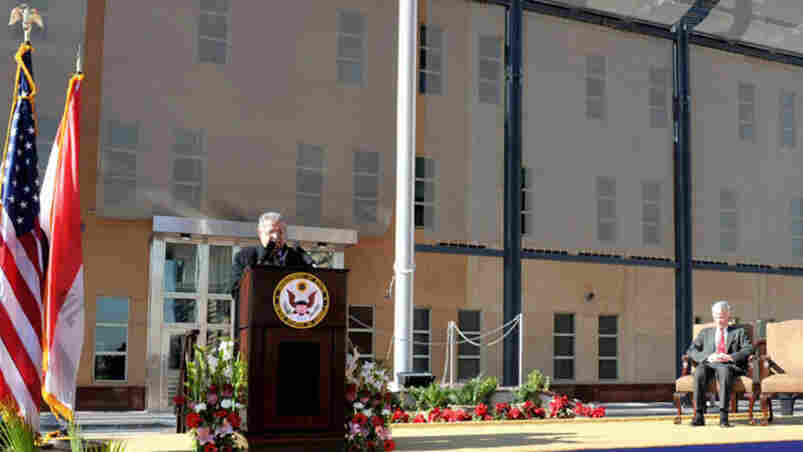 Iraqi President Jalal Talabani speaks at the opening of the huge U.S. Embassy in Baghdad on Jan. 5, 2009. It is the largest U.S. Embassy in the world. Handout/Getty Images hide caption 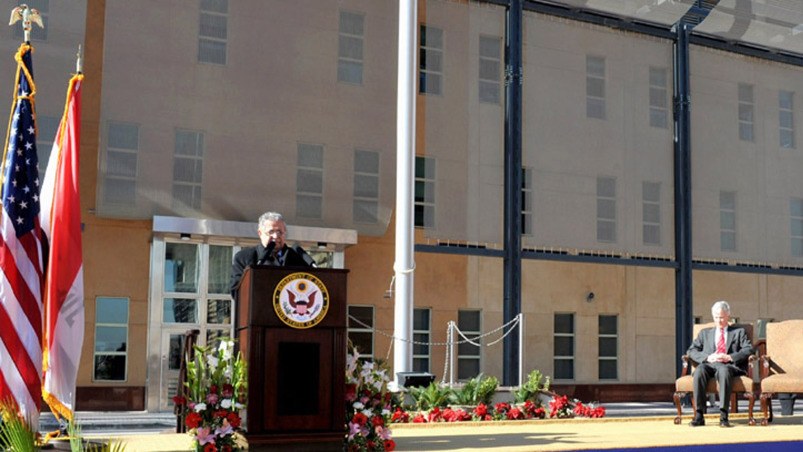 As the final U.S. troops leave Iraq, they leave behind the largest U.S. Embassy in the world.

There will be about 16,000 people working for the State Department at the embassy in Baghdad and consulates elsewhere in Iraq.

At least 5,000 of those in Iraq will be private security contractors, and there are lots of questions about whether the State Department is ready to run such a big operation in such a volatile country.

At the State Department in Washington, Undersecretary for Management Pat Kennedy has been getting contracts and other logistics in order for the embassy.

"This is something, clearly, that the State Department has never done before," Kennedy says.

The Defense Department is lending some people and military equipment, but it is the State Department that will be in charge of the imposing embassy in Baghdad and the consulates. Most of those 16,000 people will actually be contractors providing security and what Kennedy calls "life support."

This is something, clearly, that the State Department has never done before.

Pat Kennedy, undersecretary of management at the State Department, speaking about the massive U.S. Embassy in Baghdad

"The core numbers of diplomats in Baghdad and ... in Basra, Kirkuk and Irbil are on a par with what you might find in another large U.S. Embassy in a Paris, a Tokyo or a Bangkok," says Kennedy.

The price tag for all of this will run about $3.5 billion a year. So far, Kennedy says, Congress has helped.

"They have provided us with funding in separate accounts," he says, "in order to ensure we can carry out our activities in Iraq and Afghanistan so it does not drain away resources for the other 165 or so countries that we have embassies in."

One of Kennedy's predecessors, Grant Green, says there are some big questions hanging over this mission.

"What is going to be the will of our country and our Congress to support our activities there in the out years?" Green says. "Once the troops are really gone completely, other than security cooperation folks, but once they are completely gone, this turns into just another diplomatic post. And until there are some tragic events there, I think it is off the radar screen."

Already, some in Congress are questioning the need for such a large diplomatic presence in Iraq. Sen. Patrick Leahy, a Democrat from Vermont and a key member of the Appropriations Committee, calls it a behemoth of an embassy that costs more than U.S. missions to key allies and trading partners.

"Just as it was a horrible mistake on the part of the United States to go to war in Iraq to begin with, the size of this embassy and the cost of supporting this embassy just continues that mistake," Leahy says.

If money dries up, the U.S. may have to cut back on consulates or personnel.

Green, who was on the commission that studied wartime contracting in Iraq and Afghanistan, says that could mean less oversight in a country where U.S. security contractors already have a terrible image for a deadly shooting in 2007, when Blackwater security guards killed 17 Iraqis in Baghdad.

"Are they going to have enough oversight? Probably not, but they are going to have to do the best they can with what they've got," he says.

"It's just not on the security side," he continues. "We need people to oversee those life support contracts — the dining facilities and construction and delivery of water and fuel and food and all of those things that will be done by contractors. We may not lose lives if those contractors come up short, but we can certainly waste a lot of money.

Kennedy, the current undersecretary for management, says he thinks there will be enough oversight. And as for the size, he thinks it is worth it.