Accessibility links
Vaclav Havel, Leader Of The Velvet Revolution, Dies Vaclav Havel, the Czech playwright who led a revolution to bring down the country's communist regime, has died. During the communist era, Havel was one of Eastern Europe's foremost dissident writers and champion of human rights. He was 75. 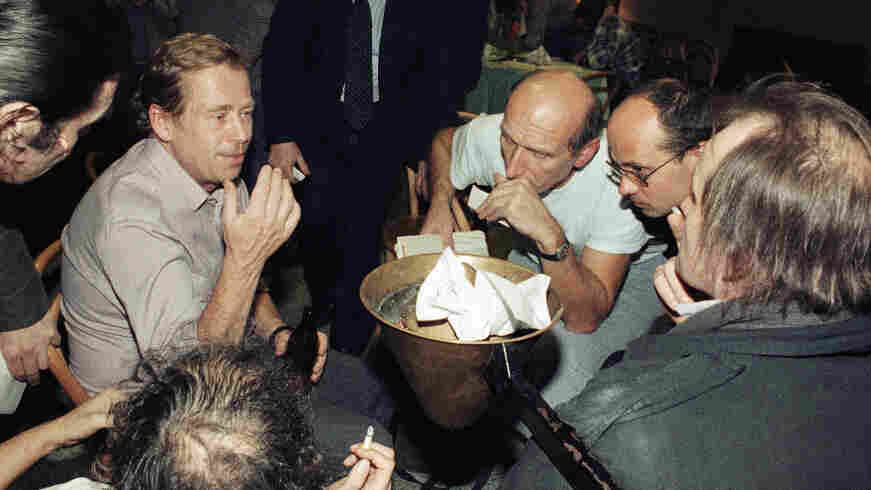 As a dissident playwright, Vaclav Havel led the Velvet Revolution to bring down Czechoslovakia's communist regime in 1989. AP hide caption 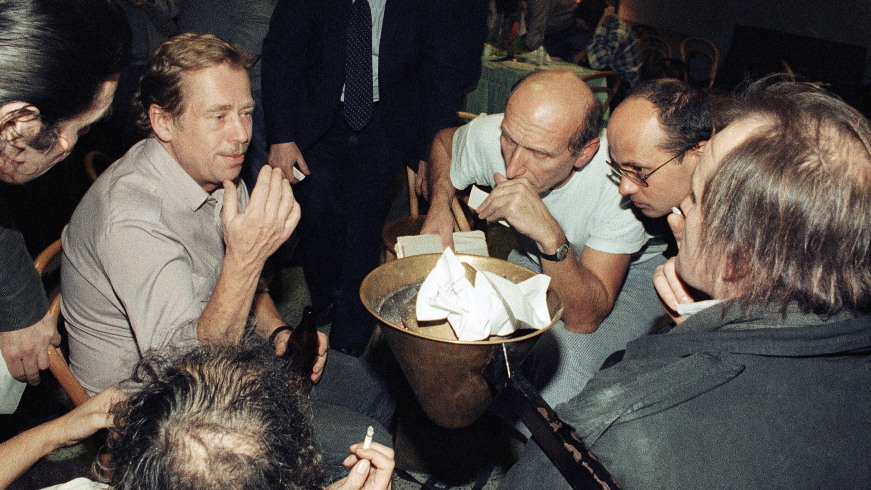 As a dissident playwright, Vaclav Havel led the Velvet Revolution to bring down Czechoslovakia's communist regime in 1989.

Vaclav Havel, the Czech playwright who led a revolution to bring down the country's communist regime, has died. During the communist era, Havel was one of Eastern Europe's foremost dissident writers and champion of human rights.

Havel died Sunday morning at his weekend house in the northern Czech Republic, his assistant Sabina Dancecova said. He was 75.

Havel rode the momentum of the Velvet Revolution in 1989 to become Czechoslovakia's first democratically elected president. Emerging from four decades of communist repression, Havel oversaw the country's bumpy transition to democracy, then rose again to lead the Czech Republic after its peaceful breakup with Slovakia.

Vaclav Havel was born in 1936 to a middle-class family. During the Stalinist '50s, his bourgeois background earned him treatment as a "class enemy" and narrowed his educational options. Havel became interested in drama and his first job was as a theater stagehand.

He soon rose to directing and writing plays, most notably The Garden Party, which was his first international success. His career ended abruptly, however, with the 1968 Soviet-led invasion of Czechoslovakia.

After that, his works circulated only in the underground, within the small circle of Czechoslovak dissidents. Often arrested, imprisoned and harassed by police, Havel became the outstanding symbol of resistance to the regime.

One of Havel's least-known works, a collage of radio clips called, Czech Lands, My Beautiful Czech Lands, was written after the 1968 invasion. By juxtaposing politicians' speeches, music, cheering crowds and the banal sounds of humanity, Havel shows how political rhetoric has deprived words of their meaning. Totalitarian society, he posits, has morally destroyed the individual.

His message was the need to restore the real meaning of words in order – as he often said – to be able to live within the truth.

As in all his works, he denounced the absurdities of totalitarian regimes, but also the apathy of a society which never rebelled against its oppressors.

At the end of 1989, after two decades of torpor, Czechoslovak society finally worked up and poured into the streets to demonstrate. Almost overnight, one of the most repressive communist regimes in the Soviet Bloc was swept aside.

The underdogs – that small group of dissident intellectuals led by Havel — were elevated from their kitchens to the Prague Castle, the seat of the Czechoslovak presidency. Two months later, in February 1990, Havel the president addressed a joint session of the U.S. Congress.

His speech touched on his favorite theme – the primacy of morality in the public sphere. And, speaking through the official interpreter, he said all citizens share a responsibility.

"Responsibility to something higher than my family, my country, my company, my success. Responsibility to the order of being where all our actions are indelibly recorded and where and only where they will be properly judged," he said.

Ever the non-conformist, the president was often seen in a t-shirt and carrying a backpack. An early visitor to the castle was Frank Zappa, one of Havel's best friends.

But Havel faced many difficulties in reconciling politics and his moral principles in a society that was trying to free itself from the social and psychological mindset of communism.

Havel's legislative proposals were often rejected by Parliamentary deputies who simply paid lip service to what Havel stood for, but didn't share his experience of sacrifices as a dissident.

Less than 1,000 days after Havel was elected Czechoslovak president, Slovak nationalists defeated his bid for re-election and the civic movement, the political party he had inspired, was voted out of parliament. The republics of the federation split into two new countries.

Havel was later twice elected president of the new Czech Republic, but his popularity waned. His critics accused him of being an amateur whose emphasis on morality in politics alienated public opinion.

In a 1993 interview at the Prague Castle, Havel acknowledged that he had often failed to translate his moral message into political action. But he pointed out that throughout Eastern and Central Europe, the intellectuals who guided their countries out of communism no longer enjoyed popular support.

"In most cases, people in these societies just tried to survive or to adapt during the totalitarian period," he said. "That is why they found it difficult to identify themselves with those people who were bold enough to take risks, and who challenged the apathy of a large part of society."

Jan Urban was a spokesman of the civic forum, the movement founded by Havel that toppled communism. Urban admits that under the totalitarian regime, Czechoslovak dissidents were isolated from the people; there was a large gap between the dissidents' willingness to take a moral stance and the passivity of society at large.

Urban says Havel failed to understand that politics is the art of bargaining and compromise.

"People are eager to hear moral message, but you cannot build politics on a moral message only," he says. "You have to know that it is a craft with its traditions. That you need to talk to all power factions on scene, you have to build consensus, majority behind your program.

"It is about independent judiciary, parliament, constitutional court, independent media, all these small and long-term projects you have to work on — it's not just that you are a god somewhere on mountain coming down with big message and going back again."

The Art Of The Possible

Havel's writings after the fall of communism were proof of his anguish in trying to reconcile his moral principles with the pragmatic requirements of governing. Adjusting to the art of the possible was a difficult task for a man who had spent all his formative years on the margins of a communist society.

He became more and more impatient with a populace which would not assert itself and tended toward inertia and conformity, but Havel refused to be a pessimist.

In his 1992 book, Summer Meditations, he said the main goal of politics in his country is the moral reconstruction of a society devastated by the immorality of communism. And he said he would continue to knock his head against the wall to prove that politics cannot exist without morality.

Reflecting on his political experiences in the 1993 interview, Havel said he had learned to be more patient and that he had also learned the difference between the intellectual and the politician.

"The intellectual can produce a finished product, while the work of a politician is a never-ending process which must constantly adapt to the changing needs of society," he said.