Accessibility links
A Wise And Zany Editor: The Legendary Harold Ross As a journalist and author looking for some inspiration, Jill Abramson looked to James Thurber. His description of working for storied editor Harold Ross isn't just hilarious; it's an illuminating look at an important journalistic icon. 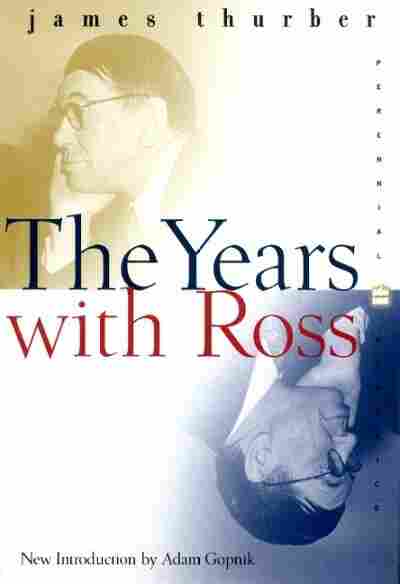 Jill Abramson is the executive editor of The New York Times. She is also the author of The Puppy Diaries: Raising a Dog Named Scout.

James Thurber would surely care less and laughingly shake his white head over my characterization of him as an overlooked writer, but these days it's true and a terrible shame.

In his own lifetime, he was an American icon: On bedside tables across America, stacked next to Bibles, were copies of his collection The Thurber Carnival and his fictionalized autobiography, My Life and Hard Times, for a few belly laughs during dark nights of the soul.

But it is Thurber's book The Years with Ross that every journalist should have. It chronicles the restless genius and sometimes frustrating ways of legendary New Yorker editor Harold Ross, who brought together an extraordinary cavalcade of talent (including Thurber) but somehow managed to keep his cast of divas productive.

For inspiration, I reread the book right before I became executive editor of The New York Times, finding lessons in Ross' relentless perfectionism and famously exhaustive margin notes. Thurber wrote that "when you first gazed, appalled, upon an uncorrected proof of one of your stories or articles, each margin had a thicket of queries and complaints — one writer got a hundred and forty-four on one profile."

As he tells it, Ross's style did not always endear him to his staff. His intense dedication to fact-checking, his "wistful hope of getting out a magazine each week without a single mistake," led one fact-checker to remark that "if you mention the Empire State Building ... Ross isn't satisfied it's still there until we call up and verify it."

Thurber was shot with an arrow while playing with his older brother during boyhood and was blind in one eye. Later in life he suffered from chronic eye problems, but even while his sight deteriorated, he brought humor to his description of the magazine. His inclusion of Ross' language is particularly funny, as in this rant about a writer at the New Yorker: " 'Gretta Palmer keeps using words like introvert and extrovert,' Ross complained one day. 'I'm not interested in the housing problems of neurotics.' "

Thurber even pokes fun at himself, including a quote from his copy editor, who was exasperated at a similarity he saw in all of Thurber's stories: "The average New Yorker writer, unfortunately influenced by Mr. Thurber, has come to believe that the ideal New Yorker piece is about a vague little man helplessly confused by a menacing and complicated civilization."

Most of all, the book captures the fun of inventing the perfect magazine during journalism's heyday, when, according to Thurber, an editor could "hire anyone" and, in the case of Ross, did. He fired them, too, but often not for good.