Accessibility links
Angels Send Message Of Peace To Juarez, Mexico Young evangelicals are dressing up in silver makeup and wings made from cast-off comforters to spread their message of peace in this violent border city. They say they're no longer afraid of confronting murderers and corrupt police: "We're in God's hands."

In the violent border city of Juarez, Mexico, young evangelical Christians are dressing up as "Messenger Angels" to bear silent witness against murder and corruption, to the dismay of the police.

On a recent Saturday morning in the barrio called New Land, at the ragged edge of Juarez, the angels get ready to go to work.

Fifteen young people glue goose down recovered from cast-off comforters onto plastic wings. Others smear on silver makeup, which is, presumably, the color of angels.

This scene is not that different from any church youth group preparing for a Christmas pageant. But that's about to change.

Carlos Mayorga, an intense 33-year-old man who wears black glasses and a T-shirt that says "Love for Juarez," is the youth leader for the Psalm 100 Church, to which these young people belong.

"What we're doing here is preparing signs and wings and robes, so that we can go out into the streets to give our message of peace to this dangerous border city," he says.

While they prepare their costumes, a chilly north wind blows feathers across a barren lot that's bounded by a cinder-block wall covered with ugly graffiti. On the wall, the church has painted a sign that says, "Our father, free us from sin."

"In 2010, when we began this campaign, we were a little afraid because we were addressing murderers and corrupt police," says Patricia Gonzalez, a heavyset woman with a beatific smile, who is co-pastor of the tiny church. "But we're in God's hands, and we're not afraid now. We want to do something to reach their consciences." 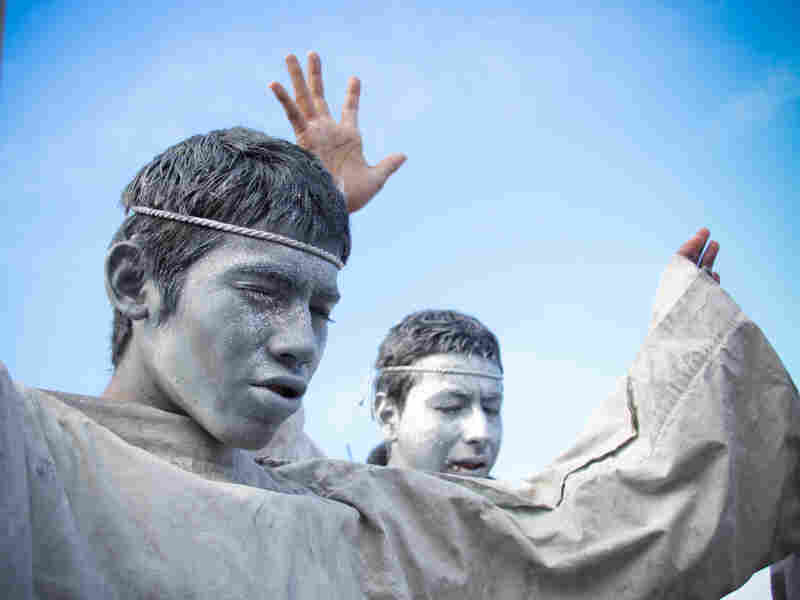 After 20 minutes of silent witness, the angels gather around a group of neighbors and pray with them for employment, for better living conditions, for salvation from sin, and for an end to the murders. Raymundo Aguirre for NPR hide caption 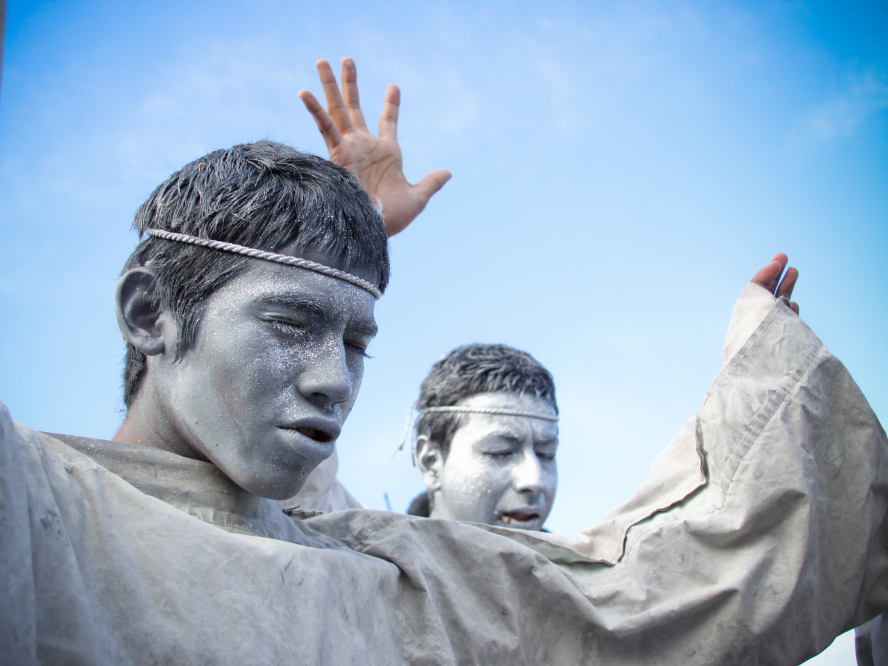 After 20 minutes of silent witness, the angels gather around a group of neighbors and pray with them for employment, for better living conditions, for salvation from sin, and for an end to the murders.

With their silver makeup complete, the young people pile into a decrepit green van nicknamed "the weenie," and make their way to the first stop of the day. Their wings are strapped on the roof.

The van pulls up in front of a supermarket at a busy intersection.

The angels, well rehearsed, take their positions on street corners and medians. They stand on folding chairs in long white robes, so that they look like giants.

And then they freeze.

Mayorga says he got the idea from the "living statues" who earn tips from tourists.

The signs reflect the sentiments of the residents of this violence-weary metropolis. A factory worker named Ramiro Mendez with a sack full of groceries watches from the sidewalk, transfixed.

"It's good what they're doing because of the violence there is," he says. "I hope no one hurts them."

Does he think Juarez needs to see these messages?

"The truth is, yes," Mendez says. "There've been lots of marches and everything," he continues, "but they haven't achieved anything. The violence continues."

Juarez has five or six murders a day, on average, according to figures maintained by Molly Molloy, a librarian and professor at New Mexico State University. That's down from nearly 10 bodies a day last year, but residents still consider the killing intolerable.

There are regular noisy marches for peace and justice in this lawless city, but the angels practice bearing silent witness.

No one said it would be easy.

"The sign is heavy and the wind blows our wings," says 17-year-old David Rubalcava. "Yeah, this work is tiring."

"Sometimes we get positive responses from the people, and sometimes negative responses. Some people don't like it, they tell us we're going to get shot. But it's more important what God thinks about us," Rubalcava says.

Similar angel groups have sprung up in other conflictive Mexican cities, such as Torreon, Veracruz, and Matamoros, Coahuila. But this is the gutsiest gang of angels. They don't just stand on street corners, they go to the heart of darkness in Juarez — the crime scenes.

Carlos Mayorga, the youth minister, is a TV reporter during the week. So his buddies on the police beat feed him fresh homicide reports, and he races there in the rattletrap van.

As the angels pull into a neglected neighborhood, Mayorga tells them to take their places quickly and be respectful of the family that has just lost a loved one.

The corpse of a man is sprawled facedown on the dirt street. A forensic team is busy taking photographs and collecting evidence, but most Juarenses would regard this as a farce. Murders are rarely solved in Juarez. And the police are widely believed to be in the pocket of one or the other drug cartel.

Blue-uniformed officers shouldering assault rifles glower at the silver-skinned teenagers as they pull on their wings.

A commander saunters over and instructs them, "Behind the cordon, please."

Mayorga — with the nerve of a police reporter — pushes back. "You already have it cordoned off!" he says, "Let us be here! We're not interrupting your investigation. Let us give our message of peace!"

Two angels climb onto a tin roof and hold up their signs for the cops to see.

A plainclothes officer wearing sunglasses is asked what he thinks of a sign that says, "Corrupt police, seek God."

"We're a free country; they can say what they want," he answers, walking away. "We're all searching for God."

After 20 minutes, the angels gather around a group of neighbors that has been quietly watching the strange tableau. The church group prays with them for employment, for better living conditions, for salvation from sin, and for an end to the murders.

After the prayer, several of the residents are weeping.

The Messenger Angels clamber back into the old van. It rattles off down the rutted street, goose down fluttering from the wings strapped to the roof like snowflakes.