Accessibility links
Report: High Levels Of 'Burnout' In U.S. Drone Pilots A new Pentagon study shows that almost 30 percent of drone pilots surveyed suffer from what the military calls "burnout." It's the first time the military has tried to measure the psychological impact of waging a "remote-controlled war." 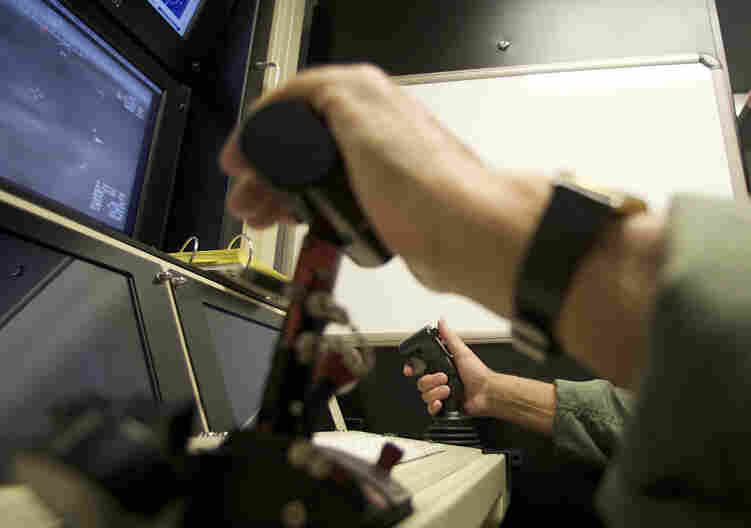 Drone pilots fight a war from the safety of bases in the U.S. but confront some of the same wartime stresses as their comrades on the battlefield. Damian Dovarganes/AP hide caption 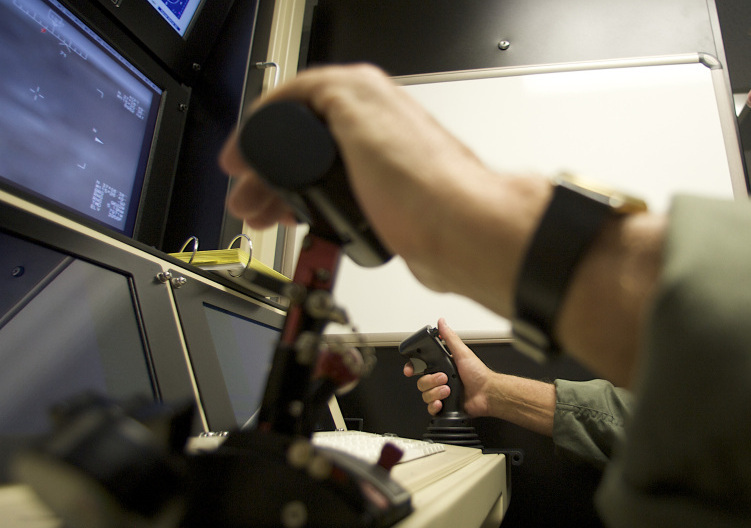 Drone pilots fight a war from the safety of bases in the U.S. but confront some of the same wartime stresses as their comrades on the battlefield.

Around 1,100 Air Force pilots fly remotely piloted aircraft, or drones. These planes soar over Iraq or Afghanistan, but the pilots sit at military bases back in the United States.

A new Pentagon study shows that almost 30 percent of drone pilots surveyed suffer from what the military calls "burnout." It's the first time the military has tried to measure the psychological impact of waging a "remote-controlled war."

The report, commissioned by the U.S. Air Force, shows that 29 percent of the drone pilots surveyed said they were burned out and suffered from high levels of fatigue. The Air Force doesn't consider this a dangerous level of stress.

However, 17 percent of active duty drone pilots surveyed are thought to be "clinically distressed." The Air Force says this means the pilots' stress level has crossed a threshold where it's now affecting the pilots' work and family. A large majority of the pilots said they're not getting any counseling for their stress.

The Air Force cites several reasons for the elevated stress levels among drone pilots. First is the dual nature of this work: flying combat operations or running surveillance in a war zone, and then, after a shift, driving a few miles home in places like Nevada or New Mexico, where a whole different set of stressors await. The Air Force says switching back and forth between such different realities presents unique psychological challenges.

Second is the issue of demand. Drones have proven to be the key U.S. military tool in the wars in Iraq and Afghanistan, and U.S. military officials say over the past decade, there has been constant demand for more pilots to fly these platforms. While training for drone pilots has increased, there are still not enough to meet demand, and pilots end up working longer than expected shifts, keeping these planes in the air 24 hours a day.

The particular nature of drone warfare is also a contributor to the higher stress levels. While the number is very small, officials who conducted the study said they did encounter a handful of pilots who suffered symptoms of PTSD — post-traumatic stress disorder — directly linked to their experience running combat operations. Unlike traditional pilots flying manned aircraft in a war zone, the pilots operating remote drones often stare at the same piece of ground in Afghanistan or Iraq for days, sometimes months. They watch someone's pattern of life, see people with their families, and then they can be ordered to shoot.

"When they have to kill someone," he says, "or where they are involved in missions and then they either kill them or watch them killed, it does cause them to rethink aspects of their life."

McDonald describes it as an "existential crisis."

Air Force officials say they are putting plans in motion to try to address some of the causes of the elevated stress levels in drone pilots. Right now, there are 57 drones flying in 57 different positions in the world at any given moment. That number surged this summer to 60, but the Air Force is going to cap the number at 57 for the next 12 months.

The cap is meant as a kind of "time out" to rethink how the drone pilots are being used. The service will use that time to re-evaluate shifts, train more drone crews to meet demand, and figure out ways to help pilots navigate between their professional and personal lives.