Accessibility links
U.S. Treads Cautiously With North Korean Transition Kim Jong Il's son, the heir apparent, has little experience or preparation to lead. Analysts say that means he won't be in a position to get back to nuclear disarmament talks and make concessions. He also may be tempted to take provocative actions to establish his leadership credentials. 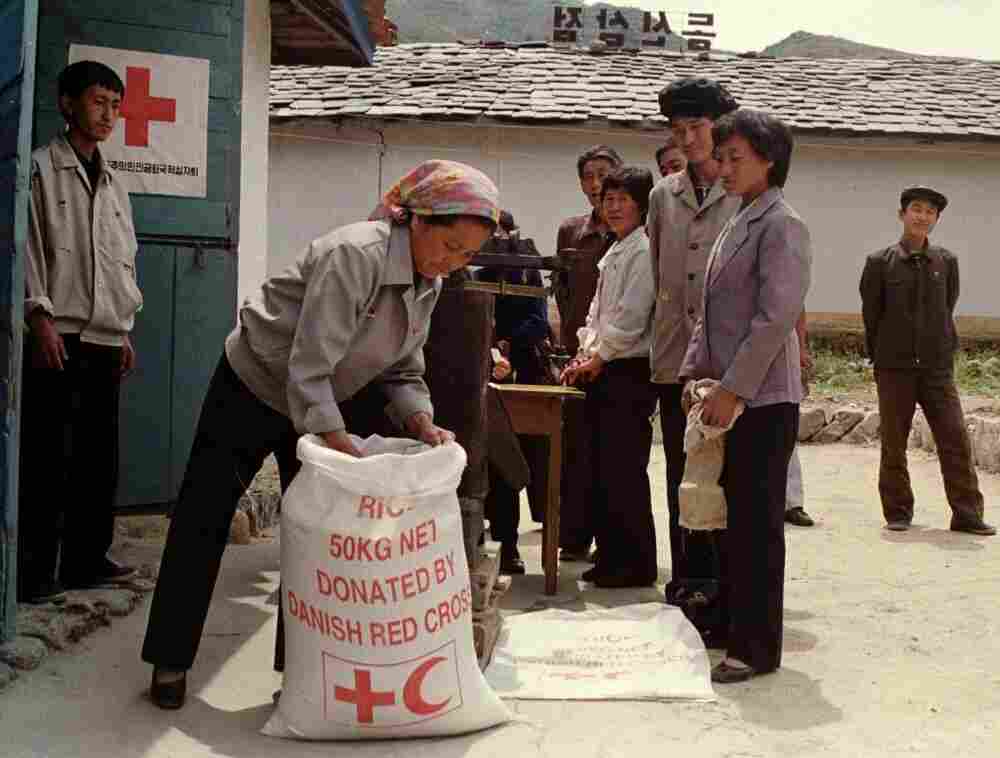 North Korean residents line up to receive food rations at a Red Cross distribution center in Tongsin, North Korea, in 1997. Discussions over U.S. food aid to the reclusive country were to take place Monday. "You could, in a very real sense, see the needs for food assistance," said an official with Mercy Corps, after a September 2011 visit to the country. Lasse Norgaard/AP hide caption

The View From Inside North Korea

The changing of the guard in North Korea poses clear risks for the United States.

Kim Jong Il's son Kim Jong Un is the likely successor. But he's still in his 20s and has had little time to prepare to take over the country. Analysts say that because he's weak, he won't be in any position to get back to nuclear disarmament talks and make concessions.

Kim Jong Un may also be tempted to take provocative actions to establish his leadership credentials, and the Obama administration has to take all this into account as it decides on next steps.

Secretary of State Hillary Clinton says she has been consulting other players in the so-called six-party nuclear disarmament talks, and met one of them at the State Department on Monday, her counterpart from Japan.

"We both share a common interest in a peaceful and stable transition in North Korea, as well as in ensuring regional peace and stability," Clinton said.

The thing about North Korea is, it appears to be remarkably insensitive to both sanctions and inducements.

She did not offer condolences on the death of Kim Jong Il, just a brief message for the North Korean people: "We reiterate our hope for improved relations with the people of North Korea, and remain deeply concerned about their well-being."

"You could, in a very real sense, see the needs for food assistance by seeing acutely malnourished and large numbers of chronically malnourished children in pediatric wards," says Jim White, vice president of operations for Mercy Corps.

The needs were also painfully evident in orphanages and primary schools, he added. White has been to North Korea seven times, most recently in September to visit three provinces that had suffered from floods.

Key Moments In The Rule Of Kim Jong Il

Though the U.S. always says it doesn't play politics with food aid, one expert on the subject, Marcus Noland, says the deal that was in the works was to provide nutritional assistance if North Korea rejoined disarmament talks.

"So the United States finds itself in the ironic position that it has agreed to the sweetener — to the food aid — but is unlikely to see much progress on the nuclear talks because the North Korean government is going to be in a period in which they are probably going to be unwilling to make any concessions," Noland says.

There appears to be a complete absence of those civil society institutions capable of channeling mass discontent.

Noland, who is the deputy director of the Peter G. Peterson Institute for International Economics, says the U.S. should follow through on promised aid and offer a friendly gesture to North Korea in hopes that it will pay off. He's just not sure the heir apparent, Kim Jong Un, will be able to or interested in taking advantage of such an opening.

"The thing about North Korea is, it appears to be remarkably insensitive to both sanctions and inducements," Noland says.

And despite the many years of food shortages and chronic malnutrition, the people aren't rising up, either.

"There's no Roman Catholic Church, there's no Solidarity Trade Union, there's no civic forum of intellectuals. There's not even a personage like Cardinal [Jaime] Sin in the Philippines who gave a kind of moral legitimacy to the people's power revolution," Noland says.

"There appears to be a complete absence of those civil society institutions capable of channeling mass discontent," he says. "So we could see unrest, we could see food riots, but that doesn't translate into significant reform in government."

How things play out in North Korea will depend mainly on the politics of the elite, and Noland says the U.S. has little influence over or knowledge about that.