Accessibility links
In California Mental Hospitals, Assaults Rarely A Crime Most of the patients in the state's psychiatric hospitals have been committed by the criminal justice system — and violence against staff members and other patients is on the rise. But of the thousands of attacks that occur each year, few are treated as crimes. 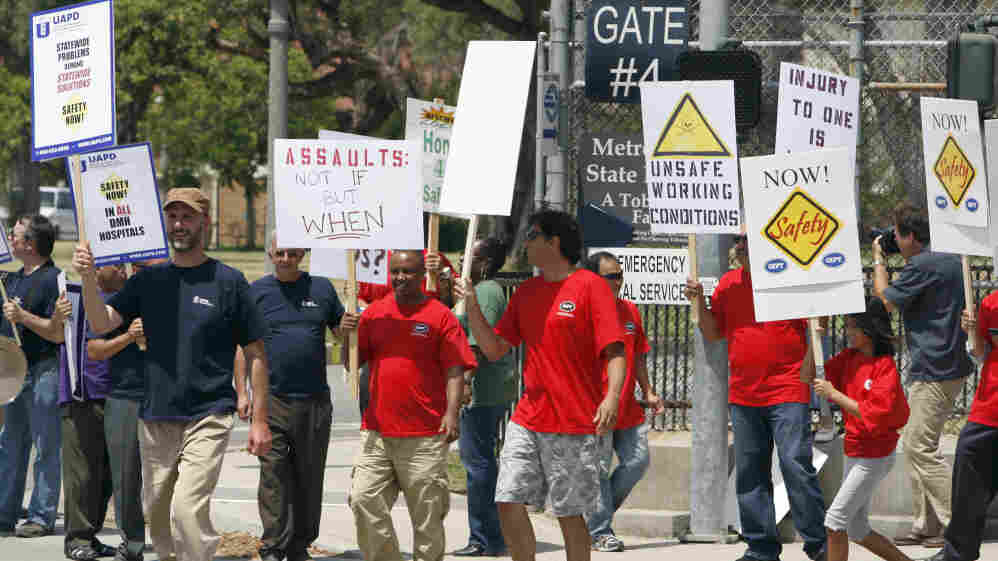 Metropolitan State Hospital employees and supporters gathered outside the hospital in Norwalk, Calif., this summer to protest repeated assaults at the hands of mental patients, and what they called dangerous working conditions. Nick Ut/AP hide caption

If anyone came up to you on the street and clocked you in the face, I'm pretty sure they'd be arrested. [But at California's psychiatric hospitals], arrest is something that happens very rarely.

Thousands of violent incidents occur every year in California's psychiatric hospitals, but very few are treated as crimes. Among the exceptions was the murder last year of a hospital staffer by a patient. But for the most part, it's been a challenge for the criminal justice and mental health systems to figure out how to deal with assaults by the mentally ill.

Violence in California's psychiatric hospitals has been increasing, partly because the kind of patients treated at the hospitals has changed. Generally, people with mental illness aren't especially dangerous. But these days, about 90 percent of the patients in California's mental hospitals are committed by the criminal justice system. They've been found not guilty by reason of insanity, for example, or incompetent to stand trial.

The spike in violence followed the adoption of a new treatment plan. It was imposed by the Justice Department in 2006 and 2007 to remedy "horrifying" cases of abuse and neglect. Treatment improved but, unexpectedly perhaps, violence got worse.

While the Justice Department has imposed similar plans on more than a dozen hospitals around the country, NPR's investigation found that none of those hospitals treats predominantly patients who committed or were accused of serious crimes, as California's hospitals do. Now, the Justice Department wants to extend its oversight of two of California's psychiatric hospitals, in part because it says the hospitals haven't gotten a handle on their violence problem.

The state Legislature has been holding hearings on this issue. Psychologist Mona Mosk told lawmakers she was attacked by a patient who was sent to her hospital from a penitentiary "because that person was so dangerous, they couldn't be managed effectively in prison."

Mosk has been working at Patton State Hospital near San Bernardino, Calif., for more than 10 years. She explained that expectations for personal safety and accountability are completely different in the hospital than they are on the street.

"If anyone came up to you on the street and clocked you in the face, I'm pretty sure they would be arrested," Mosk told lawmakers. But she said that at the hospitals, "arrest is something that happens very rarely, although assaults occur almost on a daily basis."

The numbers back her up. According to the Department of Mental Health, last year there were nearly 1,500 assaults at the hospital where Mosk works. Just 91 of those cases were submitted to the San Bernardino County District Attorney for prosecution, and the DA rejected 81 of them.

Mosk says staffers are told they're not injured severely enough for it to count as a felony offense.

And if it's not a felony, it's a waste of time and resources to prosecute, according to Gerald Shea. He's the district attorney in San Luis Obispo County on California's Central Coast, which also has a large psychiatric hospital.

Shea says that if a patient commits a simple misdemeanor battery on a staff member, "for all practical purposes, they're not going to get any additional time [added to their commitment], and therefore it doesn't really provide that kind of deterrent or protection for those staff members."

But there are cases where the criminal justice system does get involved. For example, there's the case of psychiatrist Alex Sahba, who works at Metropolitan State Hospital near Los Angeles. He told his story to fellow employees at a demonstration to protest hospital violence. He said he was talking with a patient one day, when another patient came up behind him, put him in a chokehold and bit his left ear.

Sahba has no idea how long the struggle went on. Eventually, other staff members separated them. His ear hurt like crazy. Sahba said he "noticed that blood was coming down my left ear to my left shoulder and body and leg."

Then he saw about a dozen patients standing in a circle, staring at something on the floor. "I realized they were looking at the piece of my ear that was actually bitten off ... and was spat on the floor."

Sahba had five reconstructive surgeries. His assailant, Kai Chang, was charged with attempted murder and felony battery. It was Chang's second attempted-murder charge. He'd been found not guilty by reason of insanity on the first one. And for his attack on Sahba, Chang was found incompetent to stand trial and transferred to another state hospital.

The audio of this story, as did a previous Web version, incorrectly identifies Mona Mosk as a psychiatrist. Mosk is a psychologist.