Accessibility links
Wassail: ISO A Snowflake Of Drink From caroling to consumption, wassail is an old English tradition for the holiday season. A favorite of Charles Dickens and the subject of many carols, wassail is actually synonymous with drinking "to your health." But figuring out exactly what you are drinking is another matter. 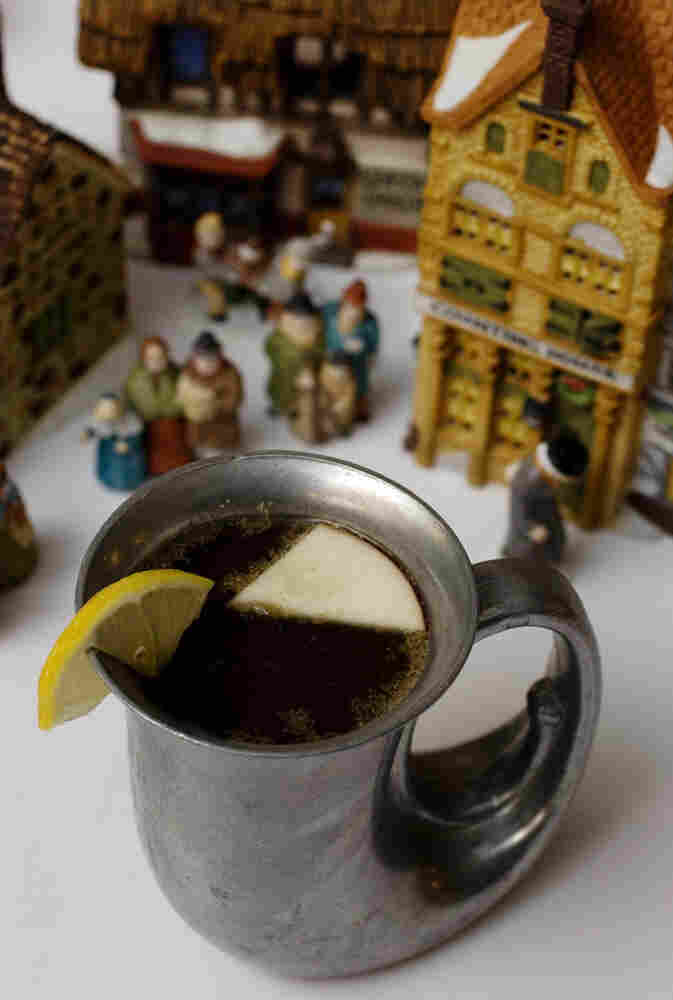 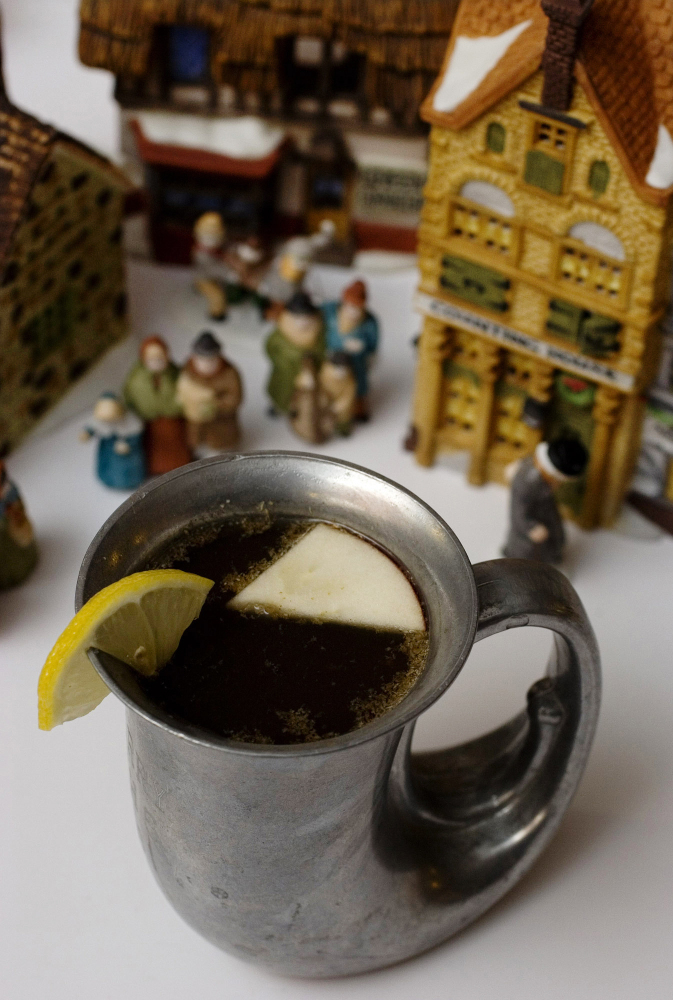 A cup of wassail, a warm mulled drink.

Part of an ongoing series on unique holiday dishes

From caroling to consumption, wassail is an old English tradition for the holiday season. A favorite of Charles Dickens and the subject of many carols, wassail is actually synonymous with drinking "to your health." But figuring out exactly what you are drinking is another matter.

Intrigued, I set out to learn more about the libation. It turns out, wassails are kind of like snowflakes — no two are alike. The ingredients, the tradition and even the pronunciation vary. (Some say WAH-sehl, others say WAH-sail — as in sailboat.)

My first stop on my search for wassail was the Wassail Festival in Woodstock, Vt. But I found more horses than raised glasses. In Woodstock, wassail is more a Christmas celebration with a horse parade and a bit of caroling rather than a drink.

Beth Finlayson of the Woodstock Chamber of Commerce says it's an old yuletide tradition.

"Wassail actually came from the Norse folks. And people would have a special drink during the winter solstice and say 'Wassail to you,' which is good health," Finlayson says.

Few places in Woodstock were serving the beverage, but Finlayson found a cozy spot that had a batch on the boil. The Prince and The Pauper restaurant makes wassail with mulled cider and the spirit of your choice. Vincent Talento, the owner, gave me a taste of their recipe with a nip of brandy.

Talento says they make wassail and advertise it but once a year for the festival weekend. Most people are intrigued, he says, but "others just want a martini."

Few people seemed to be partaking, so I called my friend Ben Jacks, who grew up with wassail served every Christmas Eve. Ben's stepfather, who was from a Pennsylvania-Dutch family, started the family tradition. For Ben, wassail is not about cider.

"It was a very, very strong punch. It was champagne and vodka and then a lot of really intense berry flavors in it," he told me. "And basically the idea is that you have to drink everything in the punch with your whole family. So you put it right down, and while everyone else is singing you need to be actually drinking out of the wassail bowl."

Around Boston where Ben grew up, their wassail ritual was a bit of an oddity. He seemed to be the "holy grail" of the wassailing tradition.

Historically, wassail could be just about anything — from an ale to cider or mead or a boozy punch — but it is most closely associated with a hot spiced beer. Hoping to have something a bit closer to that recipe, I met up with Randy Baril, manager of the Modern Homebrew Emporium in Cambridge, Mass. Baril makes his wassail with a home-brewed brown ale.

He puts a measure of the beer into a crockpot and then adds "Christmassy" spices — clove and allspice and cinnamon. "Then, as we taste it and I decide that it is not sweet enough, there is a little brown sugar I can throw into the mix," he says.

It's a bit medicinal for my taste, but Baril says it's all about finding your own recipe. 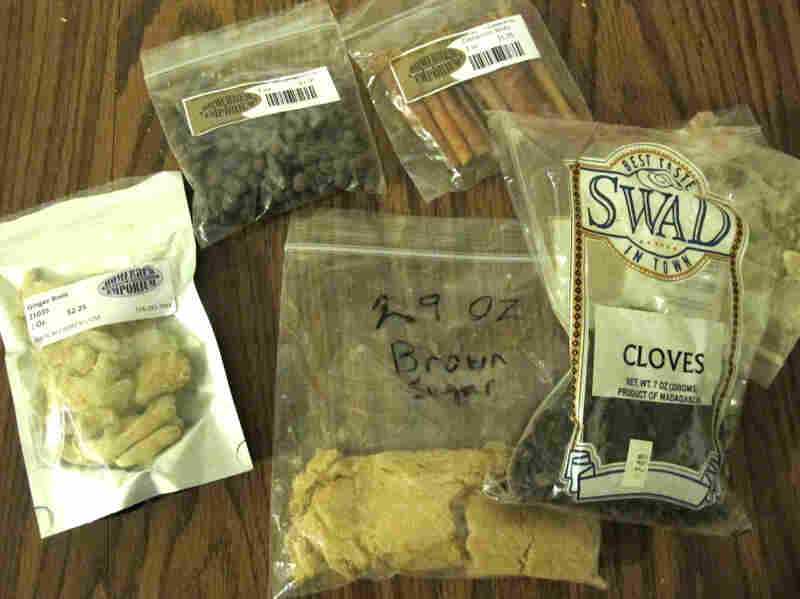 A collection of the spices Randy Baril used in a recent batch of his homebrewed brown ale wassail. The mix includes clove, allspice and cinnamon. Kathleen Osborn For NPR hide caption 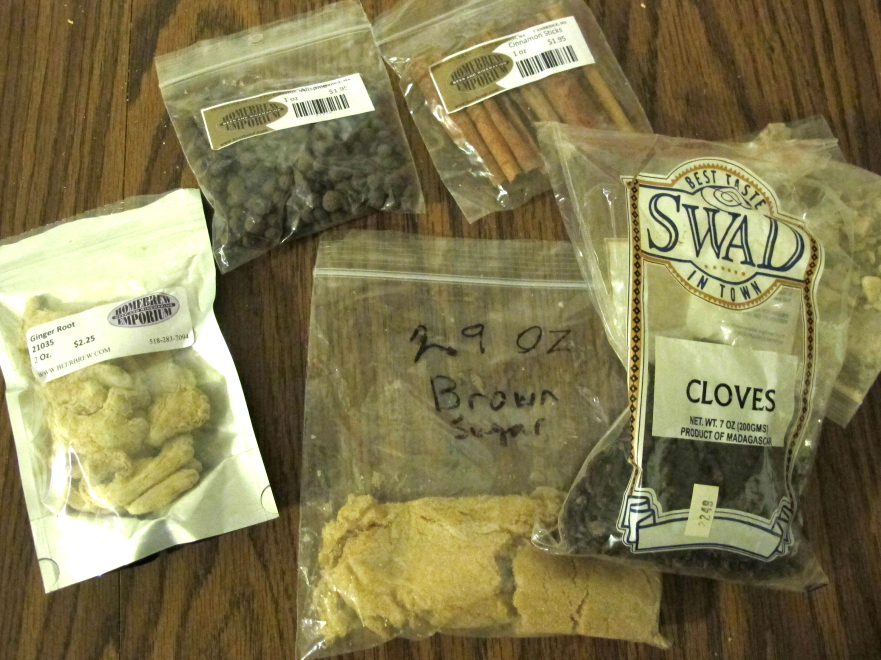 A collection of the spices Randy Baril used in a recent batch of his homebrewed brown ale wassail. The mix includes clove, allspice and cinnamon.

On stovetop or in a slow cooker, add spices to beer. (Can use a tea bag for
the clove, allspice and orange so they can be removed easily. Allow
the cinnamon and ginger to go free-range.)

Warm to just under a simmer and hold for at least 30 minutes.

Adjust spice blend to your taste. For extra sweet wassail, add a bit of brown sugar.

Enjoy on a cold winter night in the company of friends and family while singing to keep the dark at bay.

1 to 2 bottles of champagne

Mix all ingredients together and pour into a decorative vessel that the whole family can drink from.

The Prince and The Pauper Wassail Recipe

Steep all ingredients for a half-hour on a low boil. Add brandy, rum or vodka as desired.