Accessibility links
Answering The Question 'What Was It A Good Year For?' Was there big news in your neighborhood, or an interesting trend you spotted this year? Compare your idea with those of hundreds of other readers who sent their suggestions. We've used the responses to construct a word cloud.

For many people, 2011 wasn't a great year. When the economy wasn't sluggish, it was turbulent. And all manner of disasters seemed to rotate through the headlines. But in some states, and some neighborhoods, people got along just fine. Look closely at the worlds of business and sports, music and politics, and you'll find a few people and places that had it pretty good in 2011.

Our series "It's A Good Year For..." has uncovered some of the trends and stories that helped shape the past year, as NPR reporters explored why some companies — and even some lab mice — have reasons to be happy.

And we asked for your input, as well — and hundreds of readers responded with their suggestions of the things that had a good 2011. Then we took the results and used them to seed a Word Cloud, below. 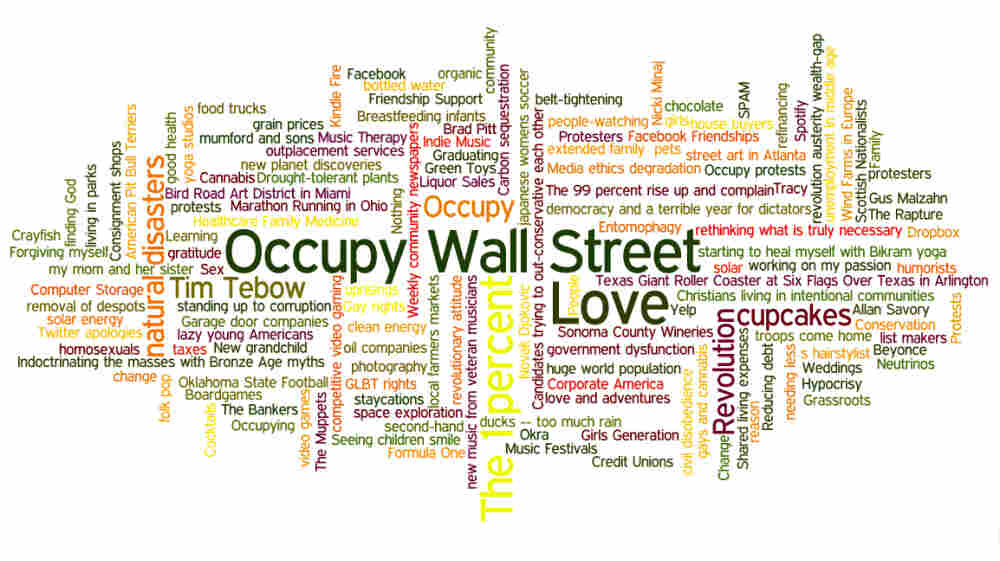 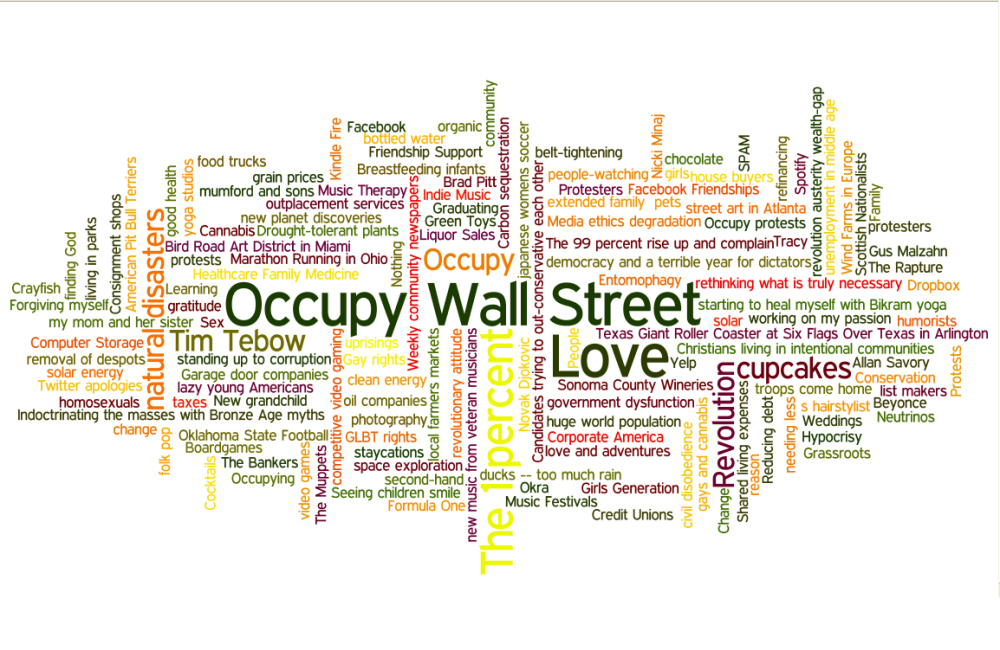 A word cloud featuring readers' submissions to the question, "What was 2011 a good year for?"

In response to readers' requests, we've now put the Word Cloud image in a place where you can download it. Or, you can see the original on the Wordle site.

As you can see, the themes of economic trouble and democratic revolt were on many peoples' minds as 2011 neared a close.

And a few responses were too personal to be easily collated into a word cloud. The common themes included enjoying one's life, friends and family, and marking personal milestones, like dieting and forgiving oneself.

One person wrote, "Me — accepted into a nursing program and all the good stuff since."

Others were simply unable to restrict themselves to short responses.

For example, one reader wrote in with an elaborately explained suggestion that garage door companies in the Lake Tahoe Basin enjoyed a heyday in 2011, thanks to rambunctiously destructive bears.

The entry ended on a note of conspiracy, as the author concluded that one company "may have had something to do with the break-ins, as many bears have been sighted wearing Truckee Overhead Door t-shirts; worse, residents are suspicious that several bears have been put on their payrolls."

And another person explained an enigmatic response of "okra" by adding, "During the Texas drought, that's the only thing that did well in local gardens."

Many thanks to all who shared their responses, and to the friends, family — and bears — who inspired them.