Accessibility links
In A Drug War, Mexican Forces Accused Of Abuses The past five years of the drug war in Mexico have been marked by brutal violence, unsolved kidnappings and tens of thousands of deaths. Most of the violence has come from the drug gangs, but some of these atrocities have been committed by the Mexican military and police. 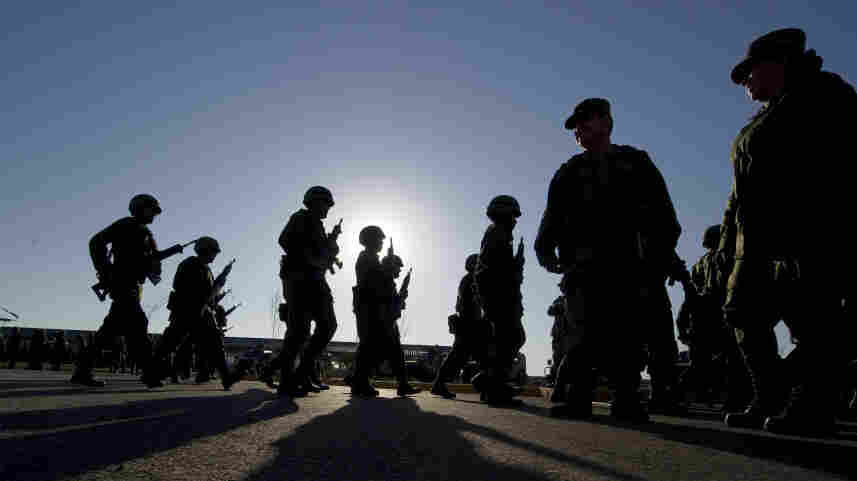 In Mexico, the past five years of President Felipe Calderon's drug war have been marked by brutal violence, unsolved kidnappings and tens of thousands of deaths. Most of the violence has come from the drug gangs, but some of these atrocities have been committed by the Mexican military and police.

The city of Sabinas Hidalgo is stuck in the arid northern plateau of Mexico, roughly halfway between the industrial hub of Monterrey and the U.S. border. It's a place many Mexicans abandon in favor of trying to find work north of the Rio Grande.

This past summer, 22-year-old taxi driver Jesus Victor Llano Munoz was also considering heading north, but instead he was arrested by the Mexican navy and hasn't been heard from since.

On June 23, a group of Mexican marines were searching the San Angel motel in Sabinas for drug suspects when Jesus Victor pulled his cab into the driveway of the motel.

His father, also a taxi driver named Jesus Victor Llano, was parked at a taxi stand across the street.

"My son had just dropped off some passengers from his taxi," Llano says, when the marines ordered Jesus Victor into the back of a gray military pickup truck.

Llano says he pleaded with one of the officers to let his son go. He recalls the officer rudely telling him that if his son had done nothing wrong, they'd soon release him.

But then the marines started driving out of the parking lot. Llano says he ran alongside the convoy of pickups, yelling: " 'Give me my son! Stop! Give me my son!' But they kept going, and that was the last I saw of him," he says.

The Mexican navy not only says they don't have Jesus Victor, they say he was never arrested. Officials with the navy didn't respond to repeated calls by NPR regarding the case.

The Mexican navy, along with the army, has been involved in routine drug enforcement operations across Mexico ever since President Felipe Calderon declared war on the cartels in 2006.

Llano says he's visited police stations, prisons and military barracks, but six months after his son was whisked away in a military pickup truck, he can't find him anywhere.

Vanishing At The Hands Of Security Forces?

Over the past five years of the drug war, more than 40,000 people have died in drug-related violence, and thousands have gone missing. Most of the disappeared were abducted by criminal gangs, but the country's human rights commission says hundreds also vanished after being detained by security forces. 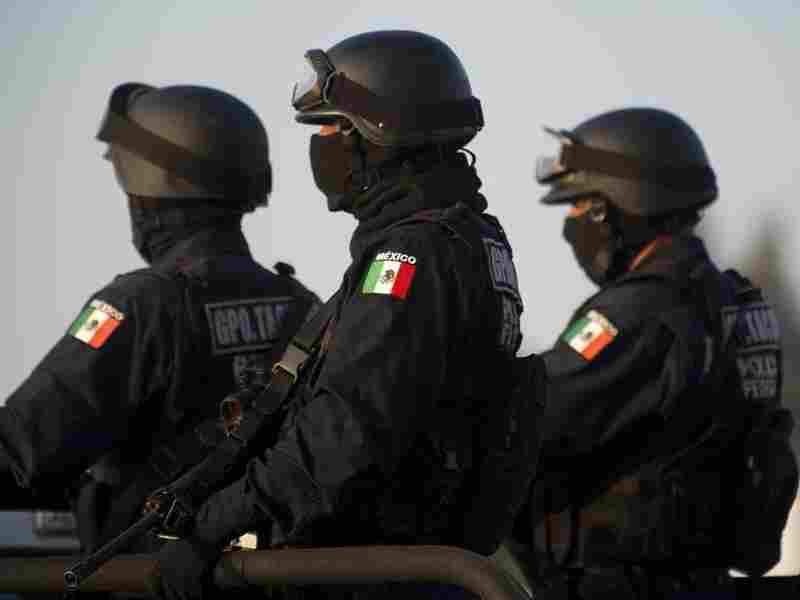 Federal policemen escort the armored car carrying a member of Los Zetas drug cartel in June. The security forces have been accused of abuses in the fight against the drug cartels. Yuri Cortez/AFP/Getty Images hide caption 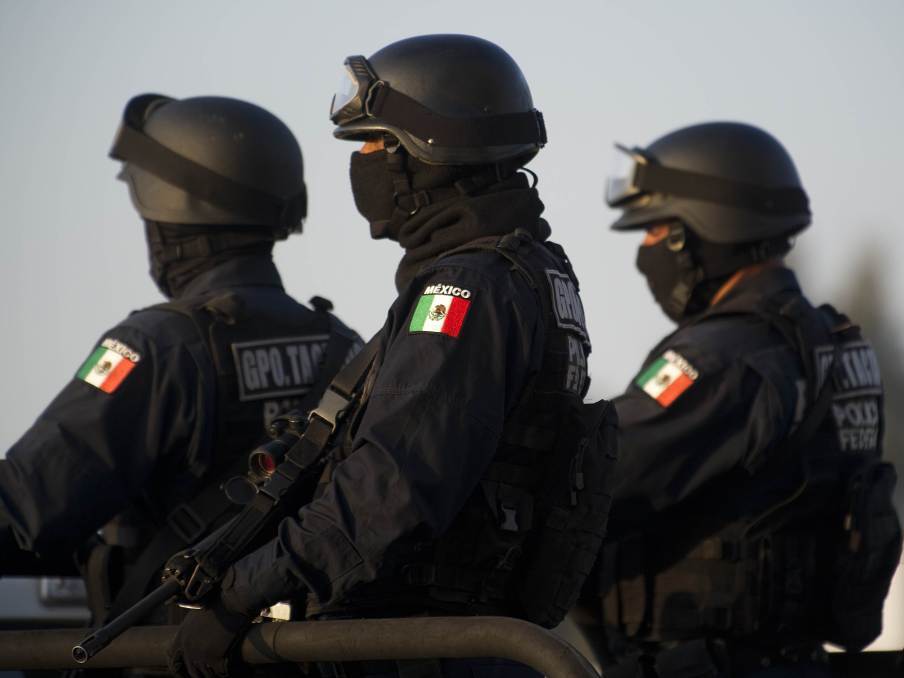 Federal policemen escort the armored car carrying a member of Los Zetas drug cartel in June. The security forces have been accused of abuses in the fight against the drug cartels.

In November, the New York-based Human Rights Watch issued a report documenting more than 200 cases of kidnapping, torture and extrajudicial killings by the military and police.

"And the message that that sends to the armed forces, to police at the federal, state and local level is: You can do whatever you need to do, so long as it's in the name of public security, fighting organized crime," Steinberg says.

In the video, a half-dozen uniformed officers are holding a young man. The suspect is on his knees in front of a bucket of water. His hands are bound behind his back with black tape. His T-shirt is pulled over his face. The officers repeatedly shove his head into the bucket and hold it there.

Elva Davila Alves says police used similar techniques to force her son to confess to murder. Davila says in September of 2010, her son Marcelo was arrested by plainclothes police in Monterrey. The next time she saw him was more than a week later in jail.

"He was still in bad shape," she says. "All his fingers were bruised and burned. His jaw was twisted. He was beaten and bruised over his whole body. He couldn't walk well."

According to court papers, Marcelo had voluntarily gone to the police and admitted to killing a fellow student at the Autonomous University of Nuevo Leon. Marcelo's lawyer and family say he was abducted, beaten and brutally tortured, including having his head submerged in water until he confessed to the murder.

To get the police to stop, they say he made up an extravagant story about how he hired a cartel hit man in a city park for roughly $300.

Marcelo, like many criminal defendants in Mexico, did not get a chance to go before a judge. His confession, along with phone records that allegedly showed him making calls to an unidentified hit man, were enough to convict him.

Based on the confession, which he says he was forced to sign, Marcelo is now serving 42 years in prison. His mother, Elva Davila, says she knows the police tortured her son. She saw how beaten up he was, but she's afraid of retribution against her family if she pursues legal action against the cops.

"I have more children. I have grandchildren. And Marcelo is still inside, and the conditions inside the prisons aren't very secure," she says. "Because of this we haven't made any formal legal complaint against the officers who did this to our son."

For weeks, the police refused to let Davila take pictures of her son or have him examined by an independent doctor. Marcelo's family has filed an appeal of his conviction.

After the Human Rights Watch report came out in November denouncing systematic abuse by security forces in Mexico, President Calderon's office issued a statement saying the real abuse of human rights in Mexico is by brutal organized criminals.

Calderon himself has launched a series of town hall-style television appearances where he's addressed the accusations of abuse. He says his forces respect the human rights of everyone, including criminals, even though this is difficult.

"The only way we can win this battle is to confront the criminals with the full force of the government, including the military," Calderon said, "but at the same time, respecting the law and human rights. Because if we don't, we become as bad as the criminals. And we lose all moral authority."

Human rights groups say Calderon needs to do more to control his security forces if he wants to hold on to that moral high ground.