Accessibility links
Six Graphic Novels That Will Draw You In Critic Dan Kois selects the standout graphic novels of the year, which include books from France and Japan, explicit picaresques, hard-boiled mysteries, memoirs, fairy tales and new twists on old classics.

Six Graphic Novels That Will Draw You In

Six Graphic Novels That Will Draw You In 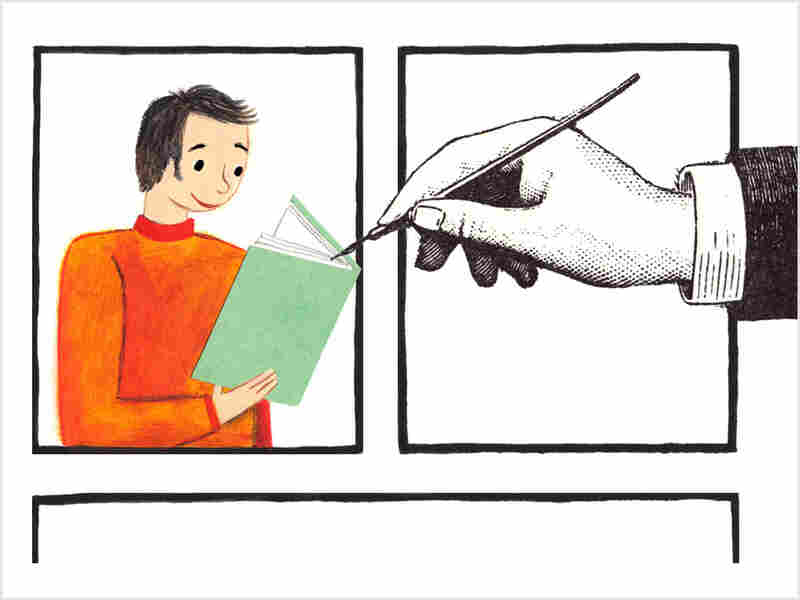 For many readers, the comics event of the year has to do with a book published 25 years ago; Art Spiegelman's anniversary compendium Metamaus delves deep into Maus, the book that changed the landscape of graphic novels forever. But for readers interested in pursuing the new as well as commemorating the classics, 2011 offered a wealth of graphic storytelling — from books as ambitious in scope as Spiegelman's masterpiece to books that married word and image seamlessly in the simple service of telling a great yarn.

My list of the best six graphic novels of the year includes books from France and Japan, explicit picaresques and hard-boiled mysteries, memoirs and fairy tales. But they're just the tip of the iceberg in what's been an extraordinary year for a medium that, 25 years after the book that changed everything, allows writers and artists to invent something newer, weirder and more beautiful over and over again.

A gorgeously drawn fairy tale steeped in the art and calligraphy of Islam, this massive, worlds-spanning story by Thompson — author of the similarly immense but intensely interior memoir Blankets — covers a lot of ground. You could make the argument that it covers too much: God and evil, Muhammad and Abraham, the paradise of love and the hell of environmental degradation, the traditions of the Mideast and the ways those traditions have been bastardized by Orientalist storytellers. Lust and dread and passion and despair wind through Thompson's story of two orphans who cling to each other amid a swirling desert and the winds of fate.

But that overwhelming flood of themes and storylines is precisely what I love about Habibi, which sets its sights high — Thompson seems to be attempting to invent a story for the ages — and very nearly achieves its goal. Since it was published in September, Thompson's Mideast fable has garnered more than its fair share of rapturous praise and angry rebuttal. That it's a book that supports such debate marks it as the most interesting comic of the year. That every one of its 655 pages is tremendously engaging and astonishingly beautiful marks it as the best comic of the year.

You might think, opening this handsome comic by the French writer/artist Winshluss — better known as Vincent Paronnaud, co-director with Marjane Satrapi of the Oscar-nominated film Persepolis — that you're in for a heartwarming, child-friendly version of the classic story. Right around the time Pinocchio accidentally incinerates Gepetto's wife during an act of energetic nose-sex, you'll probably realize your mistake. An exuberant, take-no-prisoners act of folklore reclamation, Pinocchio drags the comfortable archetypes of the little wooden boy, his lovelorn father and the Blue Fairy into weird, explicit wonderlands of sex and violence — worlds not that different, in fact, from the dark and dangerous traditions from which they were born, over 100 years ago. Bizarre, outrageous and laugh-out-loud funny, Pinocchio is very likely giving Disney lawyers nightmares right now.

Who Is Jake Ellis? 1

by Nathan Edmondson and Tonci Zonjic

The comics world is plagued by series created seemingly only in search of a lucrative movie deal — slick, high-concept books slapped together without much thought given to pedestrian issues like plot, character or dialogue. (Often, it works; this summer's wannabe blockbuster Cowboys & Aliens was born from a comics series optioned by Hollywood before the first issue's ink was dry.) That's why a sharp, smart action comic like Who Is Jake Ellis? is so refreshing. A mercenary with a blank spot where his past should be, Jon Moore makes his way across Europe, staying one step ahead of the multitude of bad guys (or are they?) on his tail. What's his secret? A voice in his head that seems to know everything. The only problem is that the voice has a name — Jake Ellis — a past, and a deep well of sadness about what he's lost. Zonjic's art is stylish and crisp, Edmonson's dialogue is funny and revealing, and the book offers the pleasures of genre done just right. Jump onboard now, with Volume 1, and get ready for a ride — and don't get too annoyed when the inevitable movie deal gets made.

An unusual hybrid of found poetry, nursery rhymes and gag cartoons, Of Lamb consists, at its heart, of 106 pages plucked from a long-forgotten biography of 19th century author Charles Lamb. Those pages were selectively erased by poet Harvey, leaving just a few words per page, to create a cracked fairy tale. The gorgeous gouache illustrations by Porter bring Harvey's epiphanies, non sequiturs and startling images to life, resulting in a book with surprises and delights at every turn. It's equal parts bewildering and eye-opening, and certainly unlike any other graphic novel published this year.

Onward Towards Our Noble Deaths

by Shigeru Mizuki and Jocelyne Allen

When he was 21, Shigeru Mizuki was drafted into the Japanese Imperial Army and sent to Papua New Guinea, site of one of the fiercest battles of the Pacific campaign. When his unit was completely wiped out by Australian forces, Mizuki heroically struggled back to base, only to be reprimanded by his superiors for surviving. This classic 1973 manga, based on Mizuki's wartime experiences, explores with crystalline irony the absurdities of life during wartime. The moon-faced Japanese grunts in Onward Towards Our Noble Deaths face a catch-22 even more insane than Yossarian's: In an army devoted to engineering the glorious deaths of its soldiers, only in failure can success be ensured. Translated into English for the first time, this is a powerful, maddening and at times bitterly funny war story — a revealing look at World War II from the opposite side.

Pinewood Forest Boy Scout Camp, New Jersey, 1995. The bewildered, enraged, hormone-addled boys of Troop 142 — and their fathers — face a week in the wilderness, struggling with their peers, their fears and great green gobs of greasy grimy gopher guts. In this deceptively straightforward comic, Dawson digs deep into what it means to be a man, a boy, a father, a friend. Dawson remembers the intractable dilemmas faced by boys who want desperately to be liked but fear standing out — the problems of an age in which your bunkmate may have a mustache while you still watch Voltron. Dawson's art is observant and eye-catching, and he has a way with dialogue; these boys, working hard to seem more awesome than their years, are as profane as you probably were at that age. This is a gem of a book, a minor masterpiece of American malehood at its most nerve-racking.

Dan Kois is a senior editor at Slate and a contributing writer at The New York Times Magazine. He's the author of Facing Future, a book about the Hawaiian musician Israel Kamakawiwo'ole. He lives in Arlington, Va.