Accessibility links
Gingrich's Catholic Journey Began With Third Wife Like many adult converts, Gingrich was drawn by the philosophical richness of the Roman Catholic Church. In 2010, Newt and Callista Gingrich produced a documentary about Pope John Paul II's historic trip to Poland. But for Gingrich, the turning point was Pope Benedict XVI's "joyful and radiating presence" on a visit to the US in 2008. 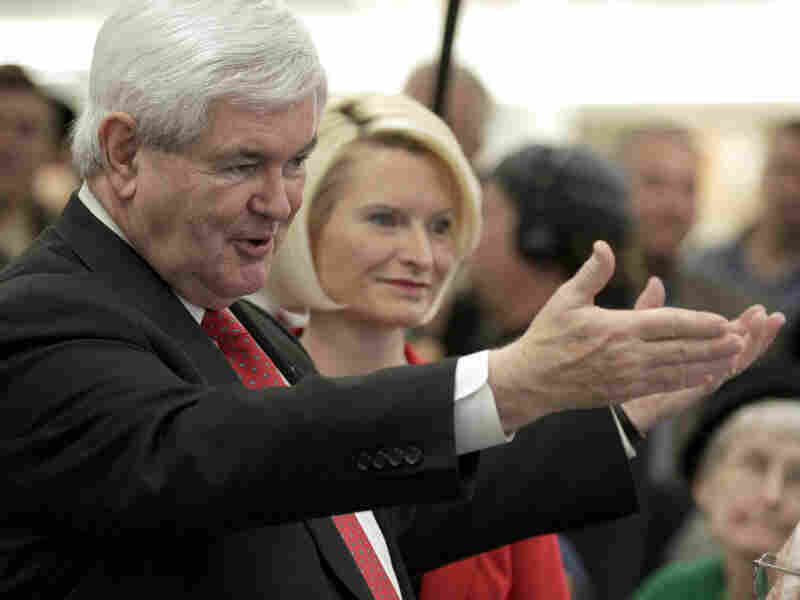 Republican presidential hopeful Newt Gingrich, with his wife, Callista, by his side, campaigns in Iowa on Tuesday. Charlie Riedel/AP hide caption 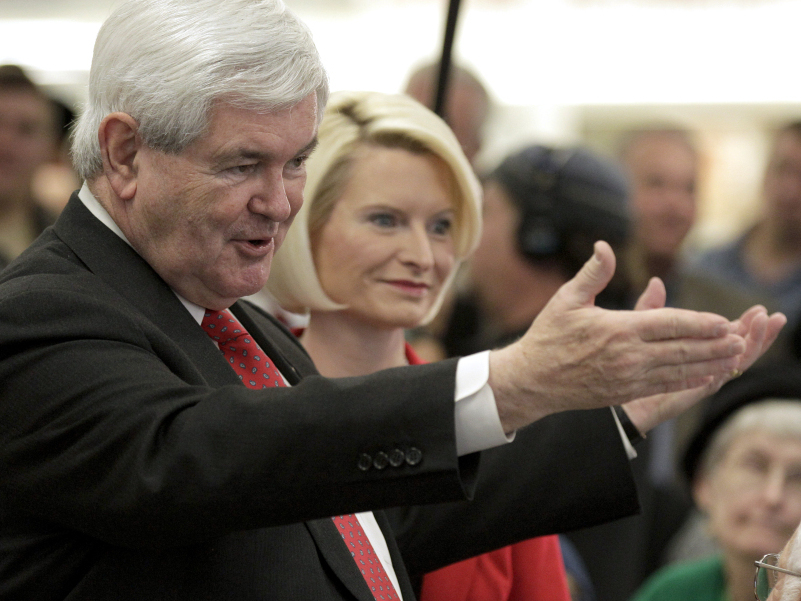 Republican presidential hopeful Newt Gingrich, with his wife, Callista, by his side, campaigns in Iowa on Tuesday.

Any discussion of Newt Gingrich's journey to Catholicism begins with his wife.

"I have always been a very spiritual person," Callista Gingrich told the Christian Broadcasting Network this year. "I start each day with a prayer, and pray throughout the day, because I am grateful for the many blessings that God has bestowed upon us."

Mrs. Gingrich, who is Newt Gingrich's third wife, is a devout Catholic who sings in the professional choir at the the Basilica of the National Shrine of the Immaculate Conception in Washington, D.C. After they married in 2000, Gingrich began attending Mass practically every week to watch her perform.

"And I was doing that as a supportive husband, and it sort of caught up with me in a way I could never imagine," Gingrich told the Catholic TV network EWTN.

A Slower And Headier Process

Gingrich didn't convert to Catholicism in a sudden swell of emotion. Rather, it seemed a slower and headier process. Like many adult converts, Gingrich was drawn by the philosophical richness of the Roman Catholic Church.

"Let's not forget this is a Ph.D., a former professor, a man who loves books and loves big ideas, and there is of course a very deep intellectual tradition within Catholicism," says Mark Rozell, a political scientist at George Mason University. "And perhaps Gingrich found a natural connection there. It connects with his persona."

They would prefer to have somebody who's a very devout Catholic and strong on the social issues [rather] than, say, a lukewarm Southern Baptist.

Gingrich began studying the history of the Catholic Church and its influence on Western civilization, especially the church's role in the fall of communism. In 2010, Newt and Callista Gingrich produced a documentary about Pope John Paul II's historic trip to Poland. But for Gingrich, the turning point was Pope Benedict XVI's visit to the U.S. in 2008.

"The joyful and radiating presence of the Holy Father was a moment of confirmation of the many things I had been thinking and experiencing over the last several years," Gingrich said at a Catholic prayer breakfast this year.

That evening, Gingrich told Monsignor Walter Rossi, the rector at the basillica, that he wanted to be received into the church. He was confirmed on March 29, 2009. He says that conversion made him a different man.

No Erasing The Past

"I have a sense of being at peace," Gingrich told EWTN. "I understand when you give the sign of peace, and when the priest says, 'Peace be with you,' in a way I never did 10 or 15 years ago. I have a deep personal sense of what that means."

But his conversion doesn't erase his past. After all, Gingrich has a history of marital infidelity. He cheated on his first wife, and his relationship with Callista, his third wife, began six years before the end of his second marriage. She was a staffer 23 years his junior; he was a Republican congressman who had yet to become speaker of the House.

"Without a doubt," says Rozell, "many people will find it rather strange, ironic, whatever, that his religious journey that led him to convert to Catholicism began with an affair he had with a young woman while he was still married to his second wife."

That has become satirical fodder for some conservative Christians, including video commentator Molotov Mitchell, whose scorching video went viral by describing Callista Gingrich as "quite the missionary — First Lady material, all the way."

Gingrich acknowledges his sins and says — in religious language — that he has sought forgiveness.

"People have to render judgment," he said in a recent debate in Iowa. "In my case, I've said upfront openly, I've made mistakes at times. I've had to go to God for forgiveness. I've had to seek reconciliation. But I'm also a 68-year-old grandfather, and I think people have to measure who I am now and whether I'm a person they can trust."

Raymond Arroyo, news director of EWTN, who covered Gingrich in the 1980s, sees "a marked change in Gingrich."

"He does seem more settled, more comfortable in his own skin, not as pugnacious, if you will. Surely part of it is a political calculation, but I think part of it might be spiritual as well."

But Mathew Schmalz, a professor of religion and a political scientist at the College of the Holy Cross in Worcester, Mass., isn't so sure.

"It seems to me that his grandiosity for which he is well-known has been held in check during the campaign," Schmalz says. "But nonetheless there have been glimpses of what one would call the 'old Newt Gingrich.' "

"I would just say," Gingrich told reporters, "if Gov. Romney wants to give back all the money he's earned from bankrupting companies and laying off employees over his years at Bain, that I would be glad to listen to him. And I would bet you $10 — not $10,000 — that he would not take the offer."

Whether or not Gingrich's style and character have changed, his conversion from Southern Baptist to Catholic is playing well with some evangelicals.

"They would prefer to have somebody who's a very devout Catholic and strong on the social issues [rather] than, say, a lukewarm Southern Baptist, as many perceived Gingrich was in his past and perhaps a little bit soft on the issues they care about very deeply," says political scientist Rozell.

He adds that Gingrich's type of culture-warrior Catholicism — anti-abortion, anti-gay marriage, decrying the rise of secular America — aligns him nicely with the conservative voters Gingrich needs to win the early contests.