Accessibility links
Dozens Killed As Wave Of Blasts Rocks Iraq's Capital A series of blasts Thursday morning in Baghdad kills nearly 70 people and injures dozens more in a seemingly coordinated attack designed to wreak havoc across the Iraqi capital. The blasts were the worst violence to hit the country in months. 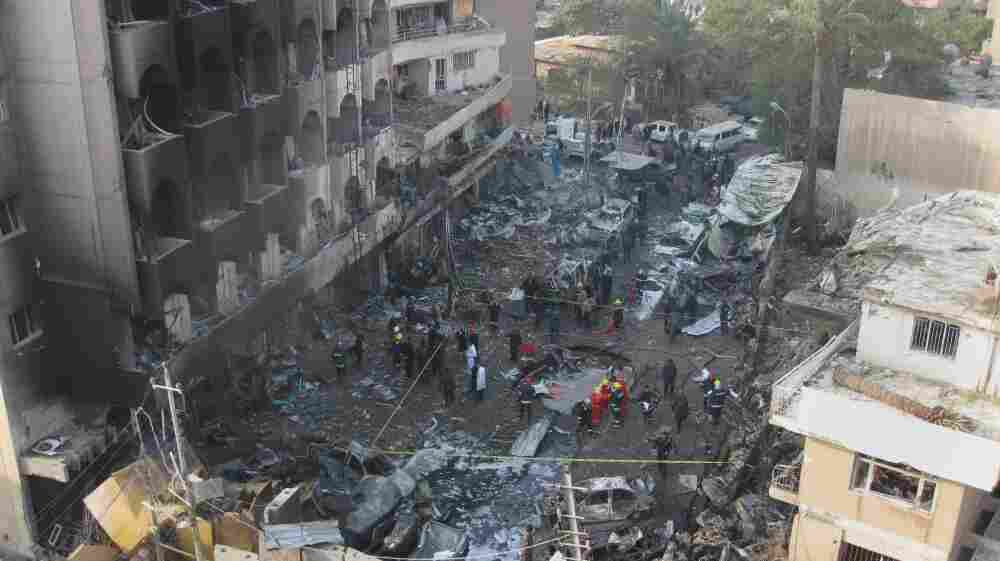 Iraqi security forces gathered at the site of a car bomb blast, one of more than a dozen seemingly coordinated explosions across Baghdad on Thursday. Hadi Mizban/AP hide caption 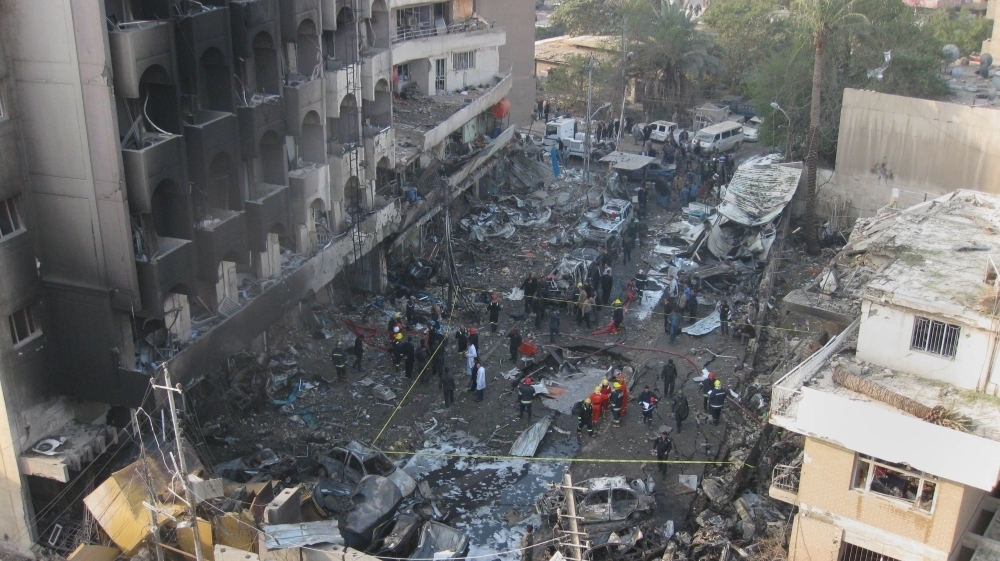 Iraqi security forces gathered at the site of a car bomb blast, one of more than a dozen seemingly coordinated explosions across Baghdad on Thursday.

A wave of apparently coordinated blasts in neighborhoods across Baghdad killed nearly 70 people and wounded more than 150 others Thursday in the worst violence Iraq has seen in months.

The explosions hit days after the last U.S. forces left the country and in the midst of a major government crisis between Shiite and Sunni politicians that has sent sectarian tensions soaring.

NPR's Sean Carberry, reporting from Baghdad, said there were 16 explosions in 13 different locations in the capital. He said the blasts took place between 7 and 8 a.m. local time and involved suicide car bombs, bombs placed in parked cars and IEDs. There were two more explosions Thursday evening.

One of the most striking things about the attack, he said, is that it seemed aimed at civilians.

"Over the last few weeks, there have been a handful of attacks each day targeting security forces, so this is clearly something different," Carberry said. "And on TV this morning, you could see huge plumes of smoke billowing throughout the city from these various explosions. Traffic has been shut down in many areas."

He also noted that 12 of the bombings were in Shiite neighborhoods, heightening fears of a new round of Shiite-Sunni sectarian bloodshed like one several years ago that pushed Iraq to the brink of civil war.

Talib al-Rubaie, 64, was playing dominoes at a café not far from the site of the explosion.

"There must be a foreign agenda behind what has happened today in Baghdad," said Rubaie, adding that he thought the goal was to undermine Iraq's fragile democracy.

Figures gathered from Iraqi health and police officials across the city put the death toll at 69, and 169 injured, including the two evening blasts in western Baghdad neighborhoods that killed nine people and injured 21.

There was no immediate claim of responsibility for the day's attacks, but Carberry said there is speculation that insurgents are looking to exploit the country's growing political divide.

The deadliest attack was in the Karrada neighborhood, where a suicide bomber driving an explosives-laden vehicle blew himself up outside the office of a government agency fighting corruption. Two police officers at the scene said the bomber was driving an ambulance and told guards that he needed to get to a nearby hospital. After the guards let him through, he drove to the building where he blew himself up, the officers said.

Sirens wailed as ambulances rushed to the scene and a large plume of smoke rose over the area. The blast left a crater about five yards wide in front of the five-story building, which was singed and blackened.

"I was sleeping in my bed when the explosion happened," 12-year-old Hussain Abbas, who was standing nearby in his pajamas, told The Associated Press. "I jumped from my bed and rushed to my mom's lap. I told her I did not want to go to school today. I'm terrified."

At least 25 people were killed and 62 injured in that attack, officials said. They spoke on condition of anonymity because they were not authorized to speak to the media.

The last U.S. troops left Iraq at dawn Sunday. For many Iraqis and those Americans who fought a nearly nine-year war in hopes of leaving behind a free and democratic country, the events of the past few days are the country's nightmare scenario.

The fragile alliance of Sunnis and Shiites in the government is now in danger of collapsing, large-scale violence with a high casualty toll has returned to the capital, and Prime Minister Nouri al-Maliki is displaying an authoritarian streak and may be moving to grab the already limited power of the Sunnis.

Maliki's Shiite-led government this week accused Vice President Tariq al-Hashemi, the country's top Sunni political leader, of running a hit squad that targeted government officials five years ago, during the height of sectarian warfare. Authorities put out a warrant for his arrest.

Maliki is also pushing for a vote of no-confidence against another Sunni politician, the deputy prime minister Saleh al-Mutlaq.

"There's a general fear that Maliki is exploiting the withdrawal of the U.S. troops in a political vacuum to go after political opponents, assert greater authority and ultimately move toward a majority government — getting rid of the unity government that's been in place for the last year or so," NPR's Carberry said.

Ayad Allawi, who heads a Sunni-backed party called Iraqiya, laid the blame for Thursday's violence with the government. The Iraqiya coalition also includes Hashemi and Mutlaq, and Allawi has been one of Maliki's strongest critics. Allawi warned that violence would continue as long as people are left out of the political process.

NPR's Sean Carberry reported from Baghdad for this story, which contains material from The Associated Press.