Accessibility links
When Ambrosia Salad Spells Dread Ambrosia salad — the festive dish of green Jell-O, cherries and Cool Whip — was a regular feature on Caitlin Shetterly's husband's family Christmas table. He recently admitted he always thought it was the "grossest looking and tasting thing ever." So of course Shetterly had to check it out. 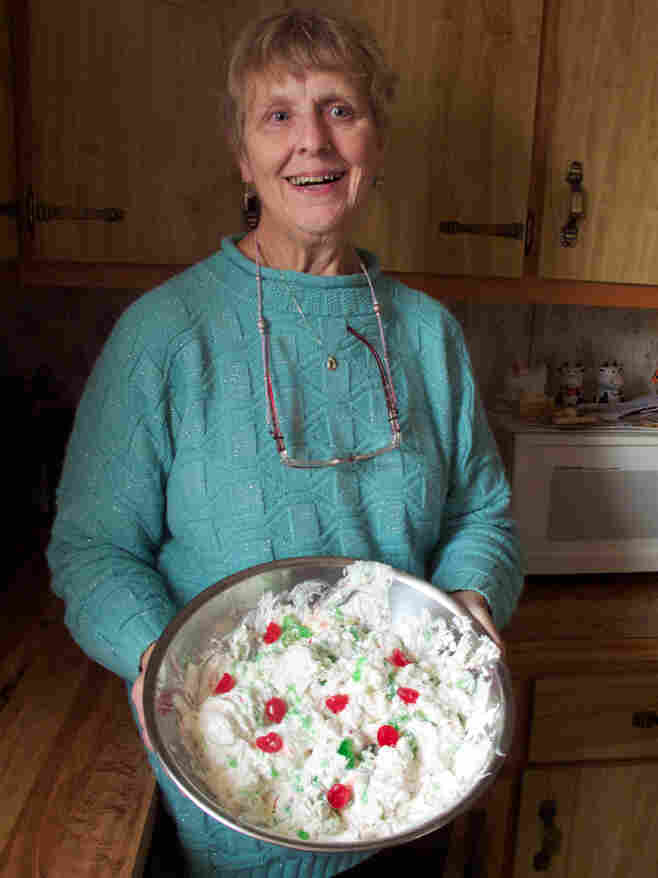 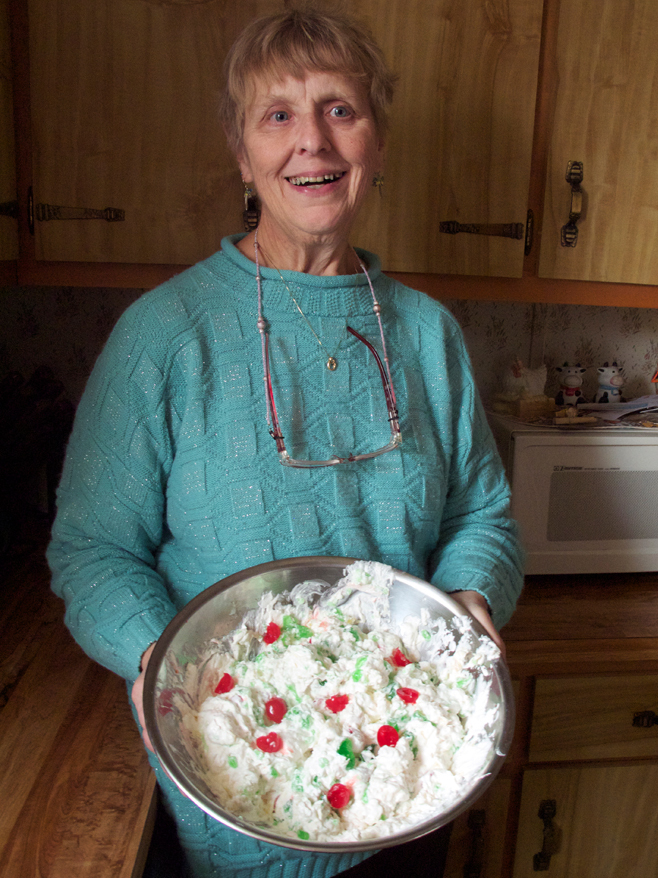 Part of an ongoing series on unique holiday dishes

Daniel Davis, a tall, thin birch tree of a man, is willing to eat almost anything. Indeed, cooking and eating are two unadulterated pleasures in Dan's life. But he recently revealed to me, his wife, that there is one dish that, as a kid, he actually feared as Christmas drew near: ambrosia salad.

"Ambrosia salad" sounds like something really yummy. But Dan says that, every Christmas, when he and his family piled into the car for the long drive to his mother's family home in the mill town of Rumford, Maine, he knew what was waiting for him: green Jell-O mixed with Cool Whip, pineapples and cream cheese.

"It was the grossest looking and tasting thing ever. Ever," he says. "It was like eating a mouthful of something squishy and sugary and oddly rather airy. It was just electric green. What else more do I have to say?"

I needed to go to the source of Dan's Christmas pain. So I called my mother-in-law, Esther, to ask her if she knew that Dan just hated her Christmas ambrosia salad. She was shocked, which shocked Dan.

"I thought always I made it really clear that I didn't like it, and at least if by not saying it directly, it was never on my plate," he says.

It turns out that Esther called Dan's brother to ask what he thought of the dish.

Dan says, "I love the fact that he and I never talked about our dislike for the ambrosia salad but, you know, 30 years later, we both agree it was the worst thing ever."

So, of course we had to go to his mother's house to try it. When we arrived, she set to work, thinning out the cream cheese with the pineapple juice and folding in the Cool Whip and then the crushed pineapple. Finally, she added the crowning glory of green lime-flavored Jell-O and a festive smattering of red Maraschino cherries.

It took awhile, but we were finally able to cajole Dan into trying it — just to see if he still hated it.

"That terrifies me," Dan says when presented with a spoonful of his mom's ambrosia salad. "It looks like a Hitchcock film where the perspective shifts and everything's growing in size."

He eats it. The verdict? "Um, it's OK," he says generously, and then quickly reaches for a glass of water.

Like many of us, Dan has learned that the only way to get through Christmas is to ignore the red, white and green ambrosia salad jiggling next to the holiday ham and grin gamely. 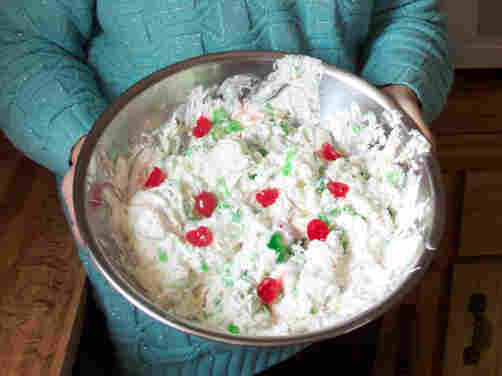 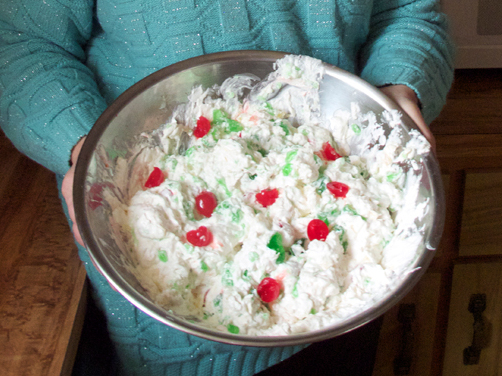 1 can of crushed pineapple

Make the Jell-O and let it sit in the fridge for about three hours. (The package says four, but three is fine.) Get your cream cheese to room temperature and put it in a bowl. Drain the pineapple and save the juice. Slowly whisk the juice into the cream cheese until it's smooth and creamy enough to blend in with the Cool Whip. When it's smooth, fold in the Cool Whip. Add the crushed pineapple and mix until it looks like little yellow Christmas lights. Take a spoon and scoop in the Jello. Fold in gently. Cut the cherries in half and mix until the salad looks festive. That's it. Then chill it, because that makes it even better.