Accessibility links
Myth Busting: The Truth About Animals And Tools Birds and wasps do it. So do octopuses, otters, polar bears and dolphins. A surprising number of animals use tools, and scientists say there are some widespread misconceptions. Among them: Using tools isn't a sign of intelligence, and animals don't need fingers to be crafty with tools. 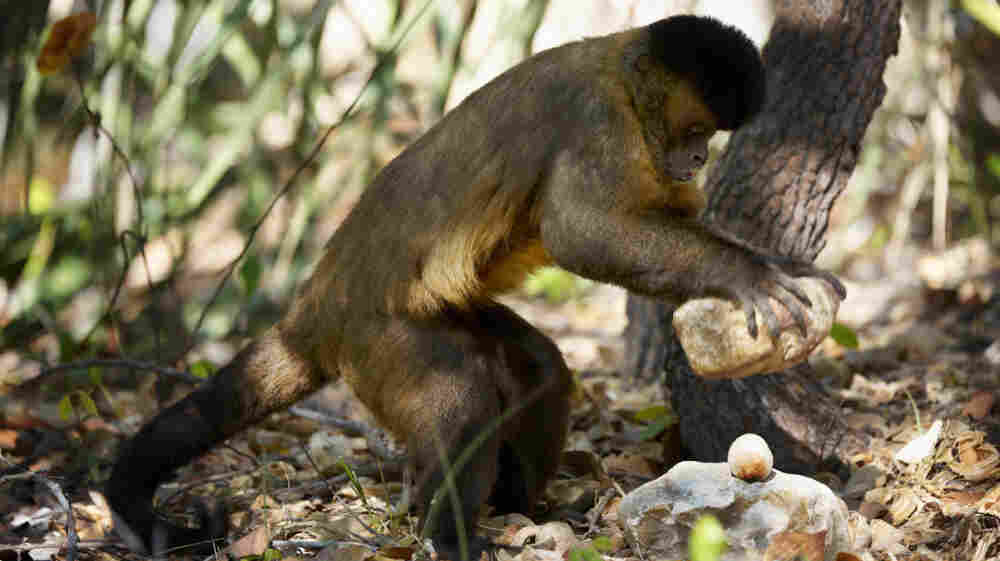 A wasp uses a pebble as a hammer. An octopus carries around a coconut shell to hide in. A shrike impales its prey on a sharp thorn.

Those are just a few examples of animal tool use that appear in the new book Animal Tool Behavior by Robert W. Shumaker, Kristina R. Walkup and Benjamin B. Beck. The book updates an edition published in 1980 by Beck. And in the new version, the authors try to dispel a number of persistent myths about animals and tools.

Shumaker tells me about some of those myths during a walk around The Indianapolis Zoo, where he is vice president of life sciences. (He is also a member of the adjunct faculty at the University of Indiana.)

As we approach a female polar bear named Tundra, Shumaker says one myth he hopes to deflate is that tool use is limited to monkeys and apes. Polar bears offer a powerful rebuttal of that idea, he says. In zoos, they often throw objects with great force and accuracy. It's less clear whether this sort of tool use occurs in the wild. But there are anecdotal reports from early Arctic explorers of polar bears using projectiles to hunt.

"One of the stories we have is polar bears getting up on a cliff and hurling great chunks of ice down on something like a walrus to kill it," Shumaker says.

Another common misconception: Tool use requires fingers, or at least hands, Shumaker says. Apparently, no one bothered to tell dolphins. "They have nothing to hold tools with except their mouth," he says, "and yet they are still innovative and creative."

Dolphins play with just about any object they find, Shumaker says. In some cases, the objects are merely toys — but they become tools when used to manipulate another object or creature for a specific purpose. And dolphins do that kind of manipulating a lot, says Jodie Baker, who is in charge of marine mammals at the zoo. As we speak over the din of dolphin splashes and chatter, Baker sees a dolphin named Kimo preparing to manipulate us with a tool — in this case, a buoy.

"If you walk by the pool and there's a dolphin playing with a toy, they'll typically throw it in your direction to get your attention," she says.

That's a form of tool use known as baiting or enticing. But scientists have collected lots of examples of dolphins doing other things with tools, Shumaker says.

And wild dolphins in Australia sometimes flush out their prey with a sponge, he says. "They hold the sponge on their rostrum, and then they use that as they disturb the sandy bottom to get fish like flounder that are down in the sand."

One of the most widespread myths about tool use is that it is a sign of intelligence. Of course, some really smart animals do use tools. But so do creatures like the bolas spider, which is named after the throwing weapon used by South American gauchos. The spider's version of the bolas is a ball made from the same silk it uses to spin a web, Shumaker says.

"When an insect flies by, they throw it and it attaches to the insect because it's sticky and they reel them in," he says. "It's very complex. Very impressive. Very dramatic. But all available information tells us that it's completely controlled from this animal's genetic history." In other words, it's programmed behavior, not something the spider figured out. Genetic programming is also the reason hermit crabs carry around another creature's shell and ant-lions throw sand at their prey.

When intelligent animals do use tools, though, they often do so in very creative ways, Shumaker says.

At the zoo's spacious elephant enclosure, Tim Littig, a senior animal trainer, points toward a baby elephant named Kalina, who is standing next to her mother, Kubwa. Kalina has been able to nurse without any help, Littig says. But things were trickier with Kubwa's previous baby, he says.

"Her last calf was a little smaller than this one and required a step stool to be able to reach her mammary glands to nurse," Littig explains. "Kubwa would move the stool around so the calf could stand up on the stool to nurse."

Technically, that made her baby the tool user. But it was Kubwa who figured out how to use the tool. And that sort of problem-solving is a sign of intelligence, Shumaker says.

So is figuring out how to make a tool — a skill many scientists once thought of as uniquely human. Shumaker says those scientists must not have spent much time around orangutans. Then he takes me to the orangutan enclosure for a demonstration.

I'm holding a large microphone, which Shumaker reminds me not to point at the orangutans, lest they think it's a weapon. But the animals aren't frightened. Several orangutans reach through the steel mesh and make it clear to Shumaker that they want to have the microphone. Shumaker tells a female named Knobi that she can touch it, which she does several times. When I move it out of reach, though, Knobi walks off and comes back with a small tree branch.

"She's making a reaching tool to try and get your microphone," Shumaker explains as Knobi breaks off one forking branch so the limb will fit through the steel mesh.

But this reaching tool isn't long enough, so Knobi fetches a branch that's 5 or 6 feet long. I stay where I am as Knobi prods at the microphone with the tool.

"She's doing her best to draw the mic in," Shumaker says to me. Then to Knobi he says: "I'm sorry; you cannot have it. Good job with your tool."

As we walk away, we can see Knobi grabbing an even larger branch.

Just 10 or 15 years ago, scientists were still debating whether orangutans in the wild also made tools, Shumaker says. Now it's clear they do, and there are several examples in Animal Tool Behavior. The book also offers scientific documentation of other species making tools in the wild. New Caledonian crows make hooks out of twigs to catch prey. Wild chimpanzees make wooden spears for hunting.

Perhaps the most surprising and controversial findings in the new book involve what scientists refer to as symbolic tool use. "These are examples where we see tools being used to represent something else or to provide a change in psychological state," Shumaker says

Symbolic tool use is something people do every time they pay for an item with paper bills or coins. And some monkeys and apes in captivity have learned to use tokens that they trade for various foods.

But Shumaker is more intrigued by the sort of symbolic tools that can affect emotions. There are lots of examples of this in people. Children often have a special stuffed animal or blanket that is much more than a toy. The object represents comfort or security to them, and they use it to feel better.

It's one more behavior that scientists once considered uniquely human. But Shumaker says there is more and more evidence that some animals use symbolic tools in much the same way.

"We would see great apes in times of great stress or sadness, like a female who had an infant that died," Shumaker says. "That female would create something that researchers called a doll and then [she] treated it exactly as she had treated her infant that had recently died."

Shumaker says scientists are still debating the significance of examples like this. But he says the fact that such a debate is even taking place shows how much things have changed since the 1960s, when scientists first realized that humans weren't the only ones using tools.