Accessibility links
Secular Opponents Of Holiday Displays Get Creative One town in Virginia is fed up with an inclusive policy for holiday displays that has brought a "Flying Spaghetti Monster" and "Skele-Claus" to its courthouse lawn. Across the country, some secular activists and atheists are taking provocative measures to kick religion off of government property. 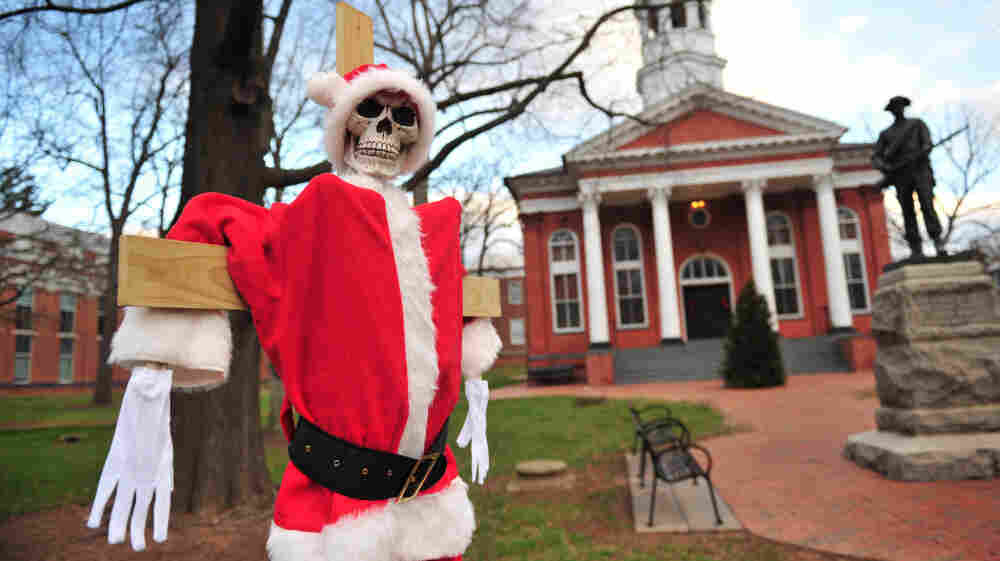 A skeleton dressed in a Santa Claus costume is part of the holiday displays at the Loudoun County Courthouse in Leesburg, Va. Many local residents are not pleased with the "Skele-Claus" or other displays by secular activists and atheists. Kevin Dietsch/UPI /Landov hide caption 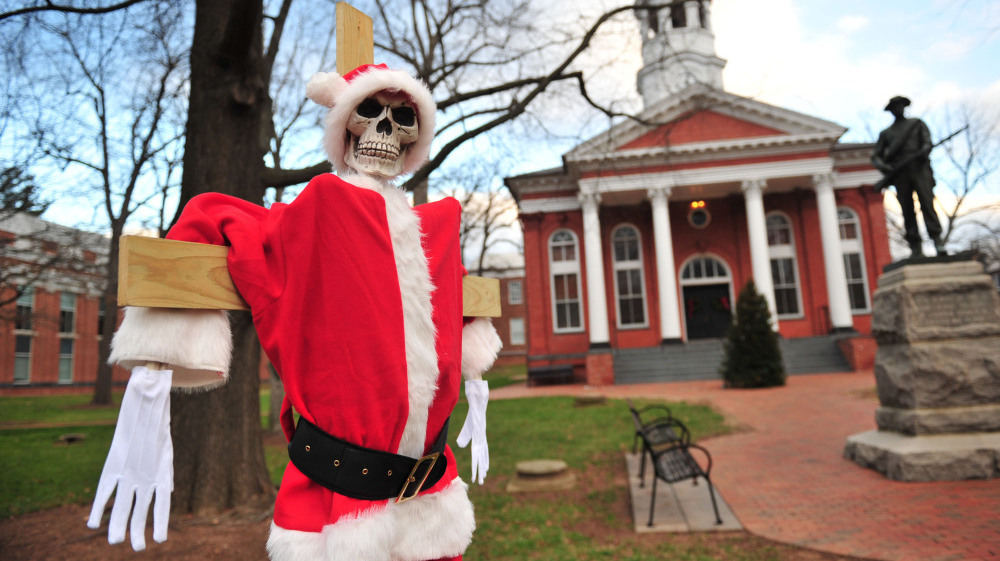 A skeleton dressed in a Santa Claus costume is part of the holiday displays at the Loudoun County Courthouse in Leesburg, Va. Many local residents are not pleased with the "Skele-Claus" or other displays by secular activists and atheists.

Nativity scenes have long been a part of holiday displays at city halls and small-town courthouses across the country. This year, some proponents of secularism are finding new ways to protest the time-honored tradition. They're putting up their own versions of the creche — and causing quite a commotion in places like Leesburg, Va.

For decades, a Nativity scene took center stage at the county courthouse there. But when some residents complained that the tradition violated the separation of church and state, its lawn was opened to numerous public displays. The decision to be more inclusive follows guidance from a 1989 Supreme Court ruling that found a single creche on public property had an "impermissible effect of endorsing religion," while a menorah and a Christmas tree together merely acknowledged holidays that are often celebrated secularly.

Atheist groups grabbed most of the 10 allotted spaces created by the county's policy change in 2009, but their holiday displays are sparking more controversy this year than ever before.

This is where the Flying Spaghetti Monster comes in. The googly-eyed wad of noodles takes the place of baby Jesus in a manger scene with pirates, a gnome and one very excited cow on a banner posted on the courthouse lawn by "Pastafarian" Matt Courtney. He's a member of the Church of the Flying Spaghetti Monster, which came forward as a satirical response to protest the teaching of intelligent design in 2005, but according to its website, is "totally legit" as a religion.

"We live in a nation of many different types of people with many different beliefs," Courtney says. "The government must be open for all of us, regardless [of] if we believe in Jesus, or no God, or flying pasta."

But many area residents feel such inclusivity has led to deliberately provocative displays — and Courtney's banner isn't the only thing that's got Leesburg residents riled up this holiday season.

There's also something residents are calling the "Skele-Claus," which, as the name suggests, is a skeleton dressed as Santa — that's slung over a cross. The "Skele-Claus" has been torn down so many times that the county sheriff set up a 24-hour surveillance truck to watch over it.

Local news footage shows one vandal pulling the skeleton off of its cross and gingerly pulling its bones apart. When asked why, the middle-aged saboteur said simply, "Because it's offensive."

Ken Reid, the incoming head of the Loudoun County Board of Supervisors, hopes the board will adopt tighter regulation of the courthouse grounds. Though Jewish himself, Reid thinks everything was "fine and dandy" with just the Christmas displays. For him, it's not a question of First Amendment rights, but of personal restraint and responsibility.

"These people are, as far as I'm concerned, hell-bent on not only banning everything on the lawn ... by being as offensive as possible, but they're basically trying to stamp out religion," Reid says.

But that's not the intention at all, according to Rick Wingrove, the director of the Virginia chapter of American Atheists.

He points out that some of the displays put up by atheist groups aren't at all offensive. One bears the message "Seasons Greetings, Peace, Love, Health and Happiness to All." They also put up a Christmas tree adorned with tinsel and lights, only instead of ornaments, it's covered with notes from atheists that say things like, "I can be moral without religion."

Secularism activists and atheists are brandishing their views and causing similar Christmas feuds across the country. 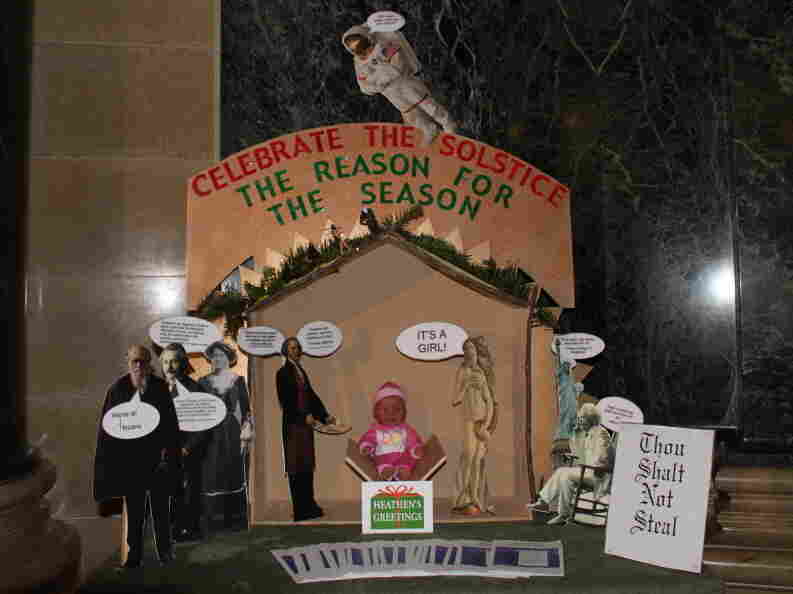 An "alternative Nativity scene" was set up at the Wisconsin State Capitol by the secular, nontheist organization Freedom from Religion Foundation when its request that a traditional creche be removed was not met. Courtesy of FFRF hide caption 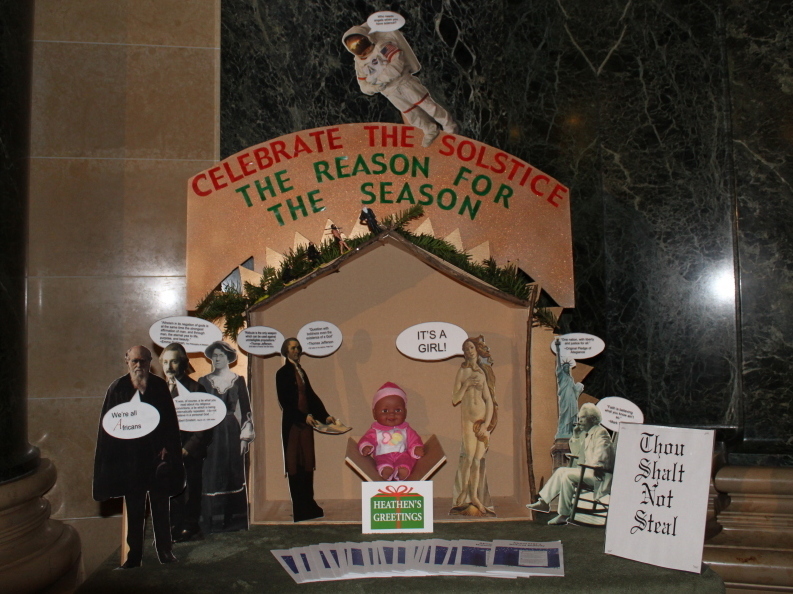 An "alternative Nativity scene" was set up at the Wisconsin State Capitol by the secular, nontheist organization Freedom from Religion Foundation when its request that a traditional creche be removed was not met.

In Santa Monica, Calif., atheist groups have gotten in on a long-running tradition by replacing much of a life-size Nativity scene in a public park with their own displays. In Texas, the attorney general backed a county courthouse in the eastern part of the state that refused to allow a banner celebrating the winter solstice alongside its creche.

When the Freedom from Religion Foundation (FFRF) sought permission to put up its own holiday display alongside a Nativity scene outside the borough building in Ellwood City, Pa., hundreds gathered to protest, wielding homemade crosses and holding group prayers on the building's steps.

The creche will stay up through Christmas, but city officials decided to keep it off public property next year instead of creating an open forum of holiday displays that would meet criteria set by the Supreme Court.

Officials in Ellwood City might have worried that the secularist, nontheist organization would put up a Nativity scene similar to the one it created for the Wisconsin State Capitol building.

The foundation's rendition of a creche casts Mark Twain, Charles Darwin and the anarchist Emma Goldman in the roles of the three wise men. Instead of Joseph, it has founding father and ardent secularist Thomas Jefferson basking in the glory not of the baby Jesus, but a black baby girl.

Foundation co-President Annie Laurie Gaylor says, "If there's going to be religion in public buildings, then there should be room at the inn for irreligion as well. They have to allow dissent."

Gaylor says her organization is inundated with reports of what she calls "seasonal violations" every December. The foundation's new "alternative Nativity scenes" will be part of their efforts to reach an end goal of keeping all religious displays off of public property, whether they celebrate Christmas or, as Gaylor puts it, "the real reason for the season" — the winter solstice.

But it's not just state and local governments that are dealing with the holiday display issue this year. A nonbinding resolution has been put forth by members of the House of Representatives that "expresses support" for the use of the symbols and traditions of Christmas. The bill was sponsored by 75 Republicans and Democrats, but is unlikely to see a vote.

Christmas Stamps Are OK; Christmas Carols? Not At The Post Office Dec. 14, 2011