Accessibility links
After Fukushima: A Changing Climate For Nuclear Nuclear power had enjoyed 25 years of relative quiet, but the Fukushima accident reminded people that despite improvements in safety, things can still go horribly wrong. The accident is unlikely to affect U.S. nuclear policy, experts say, but countries like Germany and Japan are looking to alternatives. 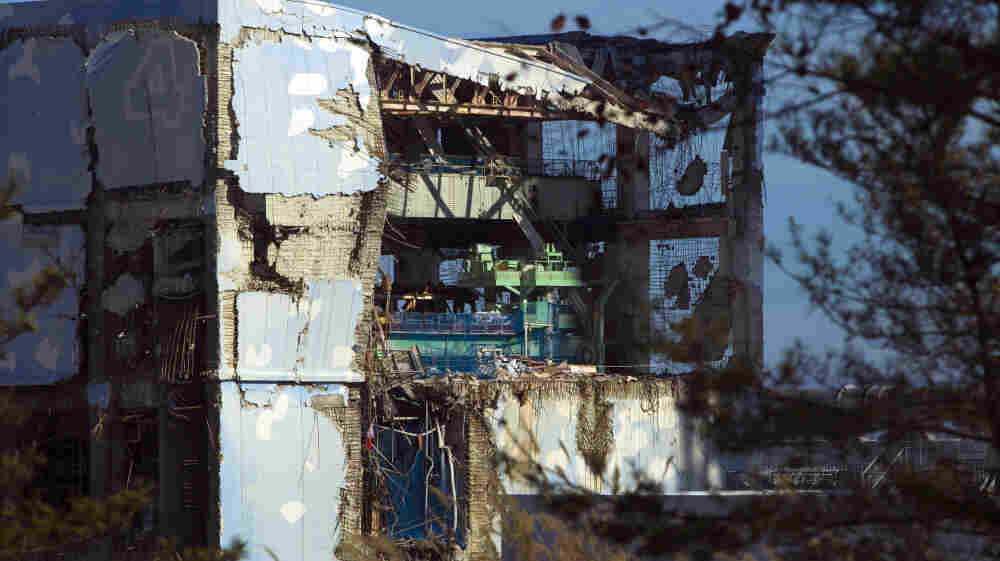 The crippled Fukushima Dai-ichi nuclear power station is seen through a bus window on Nov. 12. The four reactors that failed were stabilized this month. David Guttenfelder/AFP/Getty Images hide caption

This year has something unpleasant in common with the years 1979 and 1986. In 1979, a nuclear reactor at Three Mile Island in Pennsylvania melted down. In 1986, the Soviet reactor at Chernobyl blew up and burned.

This year's meltdown occurred in Fukushima in Japan, and nuclear power isn't likely to be the same as a result.

Nuclear power had enjoyed 25 years of relative quiet, but the Fukushima accident reminded people that despite improvements in safety, nuclear plants could still go horribly wrong.

For some, though, nothing has changed much.

"We don't see Fukushima as having a significant impact on the U.S. industry," says Scott Peterson, vice president of the industry's Nuclear Energy Institute. "The Nuclear Regulatory Commission was renewing 10 licenses for U.S. plants, extending them 20 years in operation. We were continuing to move forward in examining new reactor designs."

And after studying what happened at Fukushima, the NRC deemed America's reactors safe. However, the NRC has demanded some safety upgrades. Peterson says those aren't showstoppers for building new plants.

Republican members of Congress hauled Jaczko up to Capitol Hill, where he denied those claims. That didn't go over well with Republican representative Jason Chaffetz of Utah:

"You're telling me they're all wrong and you're right," he barked at Jaczcko during the hearing. "That, to me, is a lack of leadership and I hope, I hope that there is some sort of change, and you are going to do the right thing for your country and this commission. You should step down."

Jaczko has not stepped down. And despite the bitterness, work continues at the NRC — the commission just approved a new, safer power plant design, called AP1000.

That could help get new reactors built. But Marc Chupka, who advises electric utilities as an economist with the Brattle Group in Washington, wonders who's going to pay for them.

"Right now, just the plain economics of nuclear power are underwater," he says. He notes that over the past decade, construction costs have skyrocketed and natural gas got more plentiful and cheaper.

"Things change significantly over relatively short periods of time," Chupka says, noting that it takes about a dozen years to plan and build a new nuclear plant. "That makes it an incredibly challenging environment to plan for the long term. And that adds to the risk and it makes investors understandably skittish."

In Japan, the four reactors that failed were finally stabilized this month. The cleanup will cost many billions, and the government says: No more nukes.

Germany says the same: The government will throw its weight and wealth into solar and wind energy to replace nuclear power.

George Perkovich, director of the Nuclear Policy Program at the Carnegie Endowment for International Peace, says if Germany succeeds, nuclear could be in even deeper trouble.

Nuclear's strength is that plants run 24/7, unlike solar and wind generators. They provide continuous and reliable electricity, so-called baseload power. But, says Perkovich, "If Germany comes along and figures out how to power a very big economy, including baseload needs, without nuclear, then that to me becomes a real, if not a death blow, a real challenge to nuclear, because it breaks the whole nuclear story that this is the only environmentally friendly way to provide baseload."

One thing nuclear still has going for it is that it doesn't emit carbon dioxide, which warms the planet. Coal and gas do. At this year's international climate conference in South Africa, delegates talked about slapping a price on carbon, which could make nuclear a better financial competitor. But they decided, "No, not now." Maybe in 2020.