Accessibility links
Bronx Family's Christmas Display Is 'So Bad, It's Good' The Garabedians' over-the-top decorations have been a traffic-snarling must-see for nearly four decades. And "traditional" is definitely not the right word for this holiday attraction. Amid Santa and his reindeer, life-size figures of celebrities rejoice. 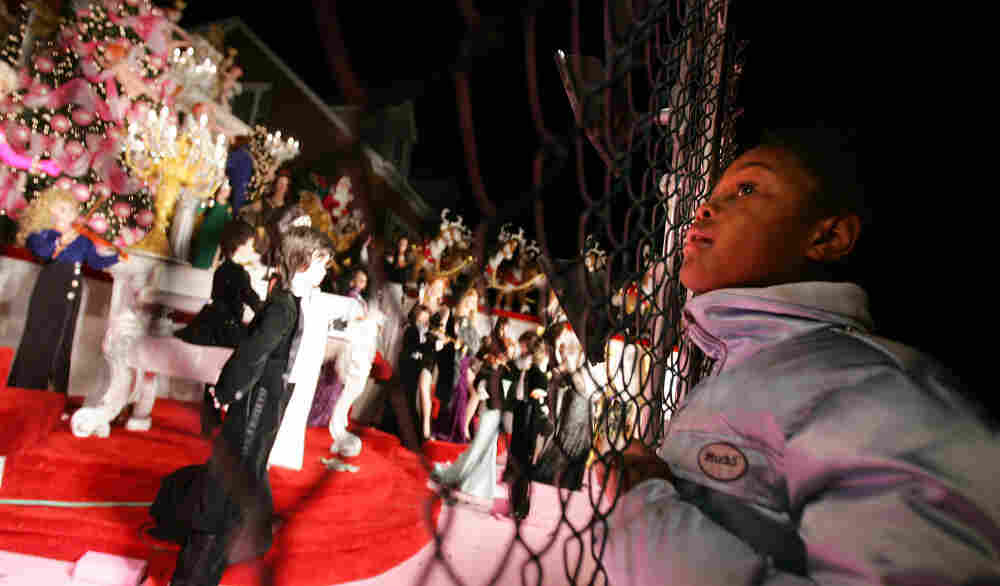 Onlookers gather in front of the Garabedian family home in the Bronx in this 2004 photo. The Garabedians have decorated their home for nearly four decades with lights and hundreds of animated figurines. Mario Tama/Getty Images hide caption 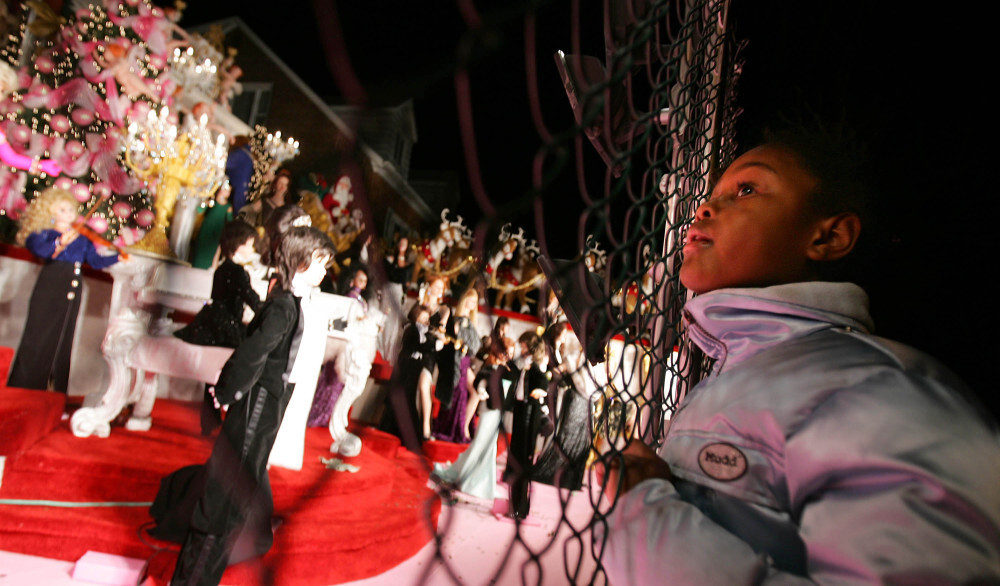 Onlookers gather in front of the Garabedian family home in the Bronx in this 2004 photo. The Garabedians have decorated their home for nearly four decades with lights and hundreds of animated figurines.

A few strings of lights and an inflatable Santa are enough for some people when it comes to holiday decorations. But not for the Garabedian family of the Bronx, whose over-the-top Christmas displays have been a traffic-snarling must-see for nearly four decades. And "traditional" is definitely not the right word for this holiday attraction.

The first giveaway might be the music the Garabedians play through speakers outside their home. Instead of a Christmas carol, you're more likely to hear a hit single from a singer like Engelbert Humperdinck.

While you will find Dasher, Dancer and the rest of Santa's reindeer crew up on the second-story deck, the Garabedians' massive holiday display also features life-size figures of other notables generally not associated with Christmas, including Elizabeth Taylor, Marilyn Monroe, Cher and Michael Jackson.

It's a spectacle that generates an annual long line of cars cruising slowly past the family's two-story house in an ordinarily quiet residential neighborhood.

Gary Garabedian's mother started the tradition of decorating the house in 1973 as a way to give back to the community. Garabedian was 9 at the time. He says it started off small, with just a few dolls. Now, they have more than 150 mannequins. Many are robotic. Some simply move their heads or hands. Others play instruments. 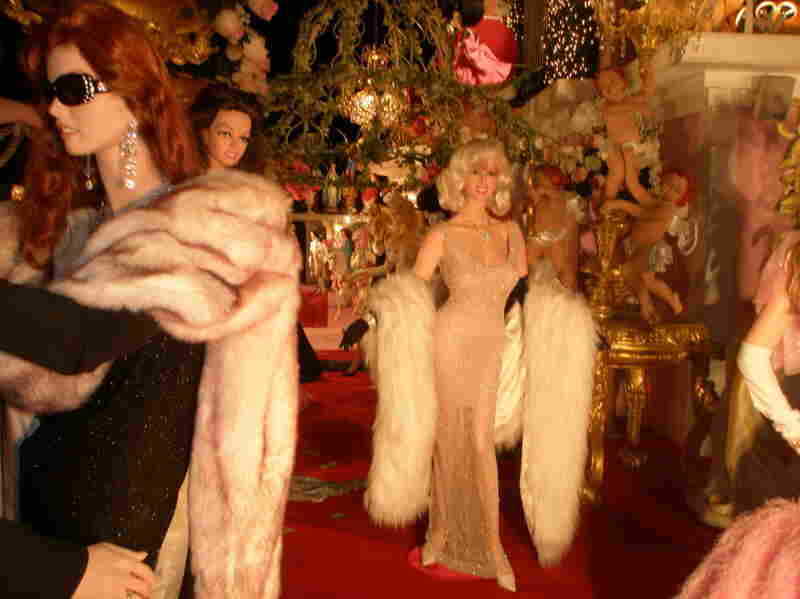 The Garabedians make their own life-size mannequins for their annual display. George Bodarky/For NPR hide caption 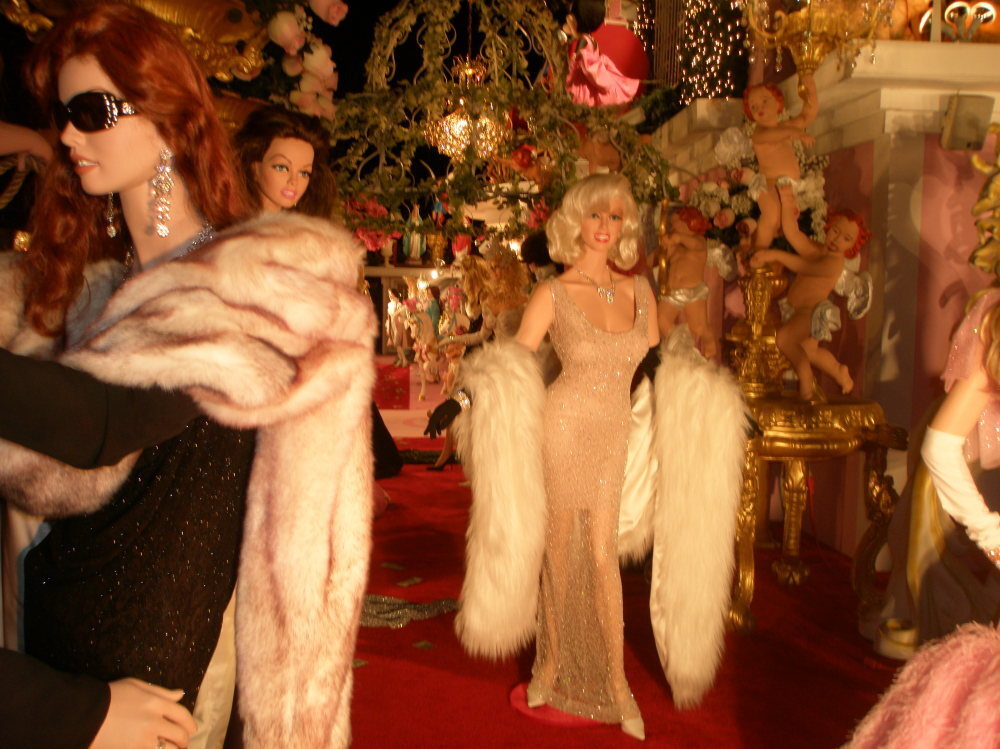 The Garabedians make their own life-size mannequins for their annual display.

"Some are dancing the waltz — the Beauty and the Beast is doing the whole waltz," he says. Some of the chandeliers spin, too, he adds.

There's even a Liberace-like mannequin playing a Steinway piano that looks like the real thing. The Garabedians make the fiberglass mannequins themselves. The family's in the dressmaking business, so the mannequins get outfitted in fashions you might see on the red carpet.

"It's so over-the-top. It's kind of like, it's so bad it's good. I think it's just great," says Paul Lurrie, who drove 40 minutes from Belle Harbor in Queens to see the elaborate display.

Connie Hardy lives on the other side of the Bronx. She came to see the house with her family and best friend. She says it makes her feel like a kid again. "It's just phenomenal. I can do this every day. Come and see this every day," she says.

This was Hardy's first time here, but for a lot of people, it's a holiday tradition. "I love this house. This is awesome. Every year is different. They always add different characters," says Damaris Rios, who has been coming for 20 years.

Alvin and the Chipmunks made their debut this year. Next year, Elvis will take the stage for the first time. Garabedian says the display took on a celebrity theme a few years ago.

"When somebody's born, a birthday, it's a celebration. So Christmas is a birthday. All the movie stars come together to celebrate Christ's birth," he says.

A giant Nativity scene overlooks the entire display. Garabedian says more than 50 500-watt halogen spotlights illuminate the whole thing. Their electricity bill runs about $2,000 for the season, but he says it's worth it because of the smiles it puts on people's faces. As for the neighbors annoyed by all the traffic on their block, Garabedian says he encourages them to just bear with it.