Accessibility links
Loose Moose Make Anchorage A Winter Wanderland Moose encounters are a regular part of life in Alaska, where about 1,500 roam Anchorage in the winter. They cause traffic jams, destroy trees and shrubs, and get their antlers tangled in Christmas lights. For Alaskans, it's often a love-hate relationship. 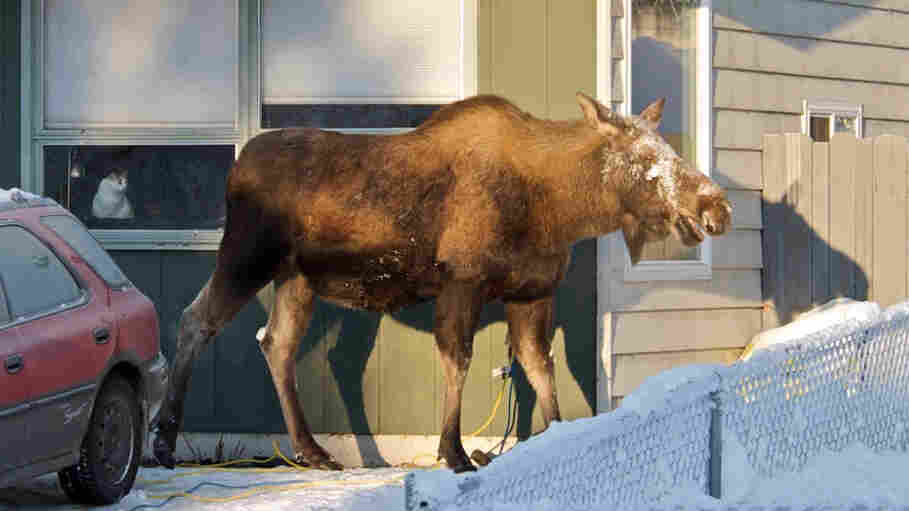 A moose catches some rare winter sun at reporter Annie Feidt's home in Anchorage. During the winter, about 1,500 moose roam the city. /Todd Salat hide caption

Anchorage, Alaska, probably has more wildlife within its borders than any other city in the world. Bears, lynx and king salmon all coexist with city dwellers — peacefully, for the most part — so it's no shock when the snow piles up in the mountains and hundreds of moose descend on the city each winter.

But learning to live with the quirky beasts takes some patience.

A few weeks ago, my husband, Dave, was biking home from work late at night. A thin layer of snow blanketed our street, making it hard to miss a winding trail of fresh moose tracks. Unfortunately for Dave, they led right to our house.

"The whole way down the street, I was like, Murphy's law — this moose is going to be in our yard, just because it's late and I need to go to bed," he says. "So when I saw the moose was there, I was just like, 'Oh, this is just as I'd feared — stupid moose is right where I don't want him to be.' "

These types of moose encounters are a regular part of life in Anchorage. About 1,500 roam the city in the winter. They cause traffic jams, destroy trees and shrubs, and get their antlers tangled in Christmas lights. A few years ago, a moose even walked right through the doors of a hospital emergency room.

"They come through the yard all the time ... and sometimes they take their naps back there," Elaine Orhmund says. She's waiting for a table at one of the most popular restaurants in Anchorage — the Moose's Tooth Pub and Pizzeria.

"Sometimes when you're out getting ready to get in the car, you turn around and say, 'Oh!' — and hurry up and get in the car and close the door," she laughs. "But we've never had any trouble with them."

Local singer-songwriter Marian Call loves the moose — and she loves to eat them, though she has never hunted one herself.

"I wrote a song making fun of myself for being a city slicker," she says. "City slickers — we feed moose our leftover Halloween pumpkins.

"But I've seen plenty of real strong Alaskan girls," she says. "[If] they hit a moose, their reaction is not to tend to their car and weep and moan and wring their hands. Their reaction is to get out and get their hunting knife and take [the moose] to pieces and take it home and eat it all winter."

Call remembers the first moose she encountered after moving here, right in the heart of downtown. She says that over the years, she has gotten used to their presence, and now she can't imagine city life without them.