Accessibility links
Jewish And Mexican Cooking Meet In 'Challa-peño' Alex Schmidt's grandparents say that the best Jewish food they've ever eaten came from Mexico. They remember a legendary husband-and-wife catering team who made downtown Mexico City feel like the shtetls of Eastern Europe. Schmidt visits her grandmother to find out more about fusing two culinary traditions. 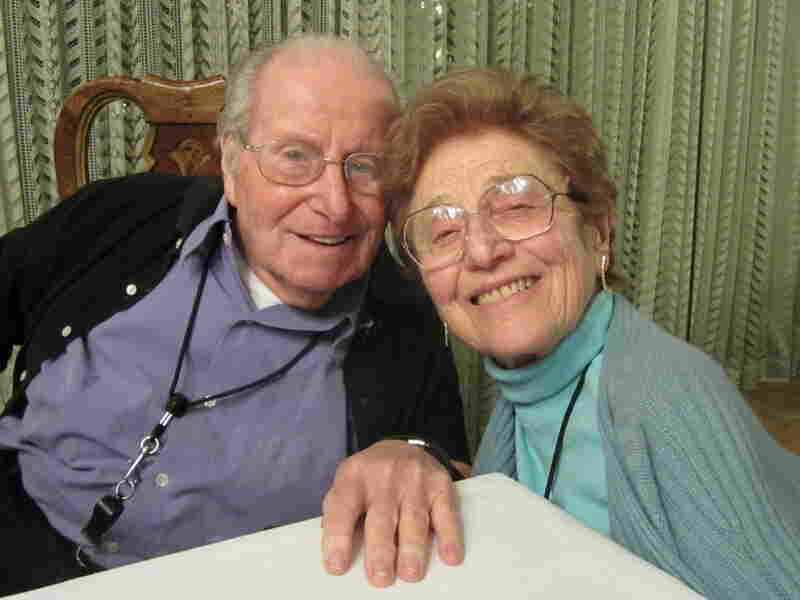 Jerry and Martha Schneider lived for many years in Mexico. They say the best Jewish food they've ever eaten was made by a husband-and-wife catering team in downtown Mexico City. Anita Schmidt/ hide caption 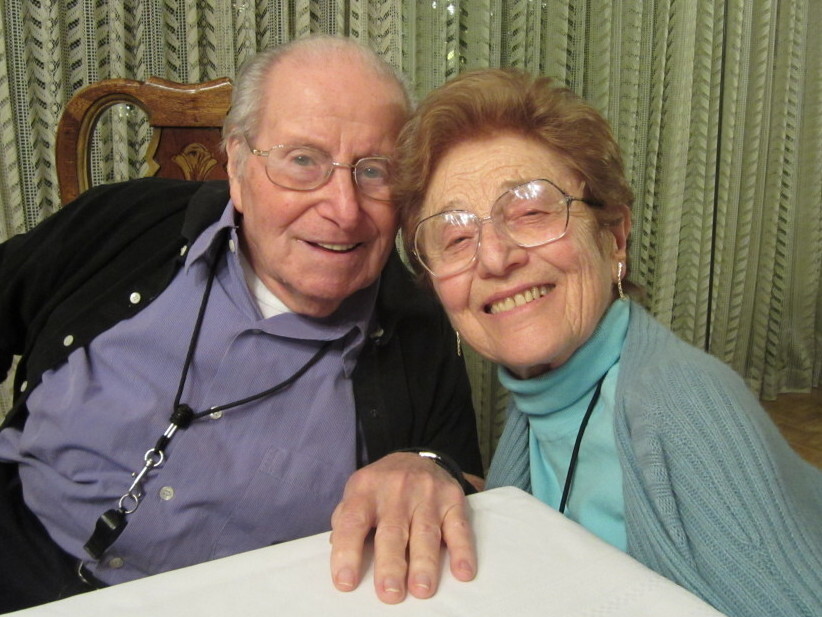 Jerry and Martha Schneider lived for many years in Mexico. They say the best Jewish food they've ever eaten was made by a husband-and-wife catering team in downtown Mexico City.

Food memories are vivid. What you ate as a kid can whisk you right back to that lost time in your life — but for my mother's parents, Martha and Jerry Schneider, one special food memory eludes them. My grandparents spent most of their lives in Mexico City but now live in Los Angeles. After many years of living in Mexico City, one particular recollection still stands out: the best Jewish food they had ever tasted was cooked by a couple in downtown Mexico City on a street called Justo Sierra.

Although Mexico City was home, their families were from Eastern Europe, so my grandparents grew up eating soups with noodles in them and baked meat in sauces of caramelized onion. Even when my great-grandfather would visit from New York, he went to Justo Sierra to taste the food of his childhood. 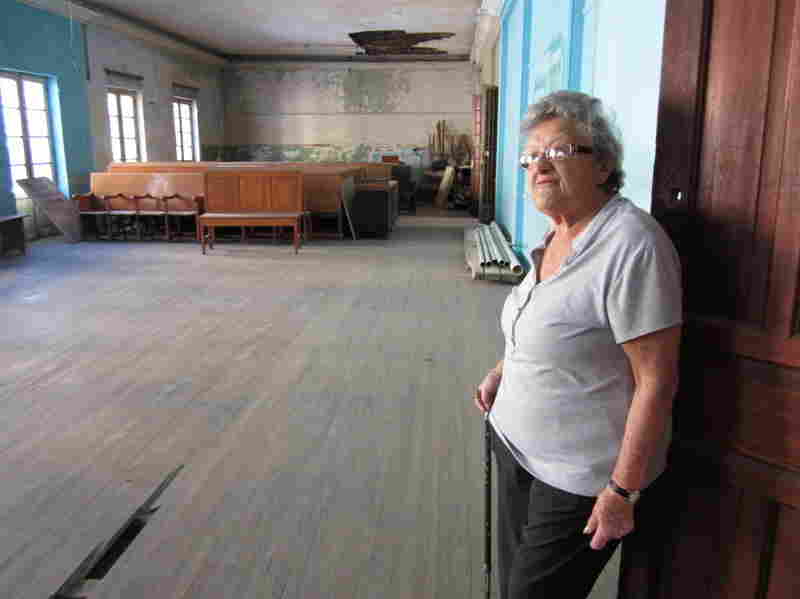 Dora Schmidt, 87, stands in the old temple restaurant on Justo Sierra street, where Motele and Etel Shlejter served their legendary food. Schmidt's wedding was catered by the Shlejters some 65 years ago. Anita Schmidt/ hide caption 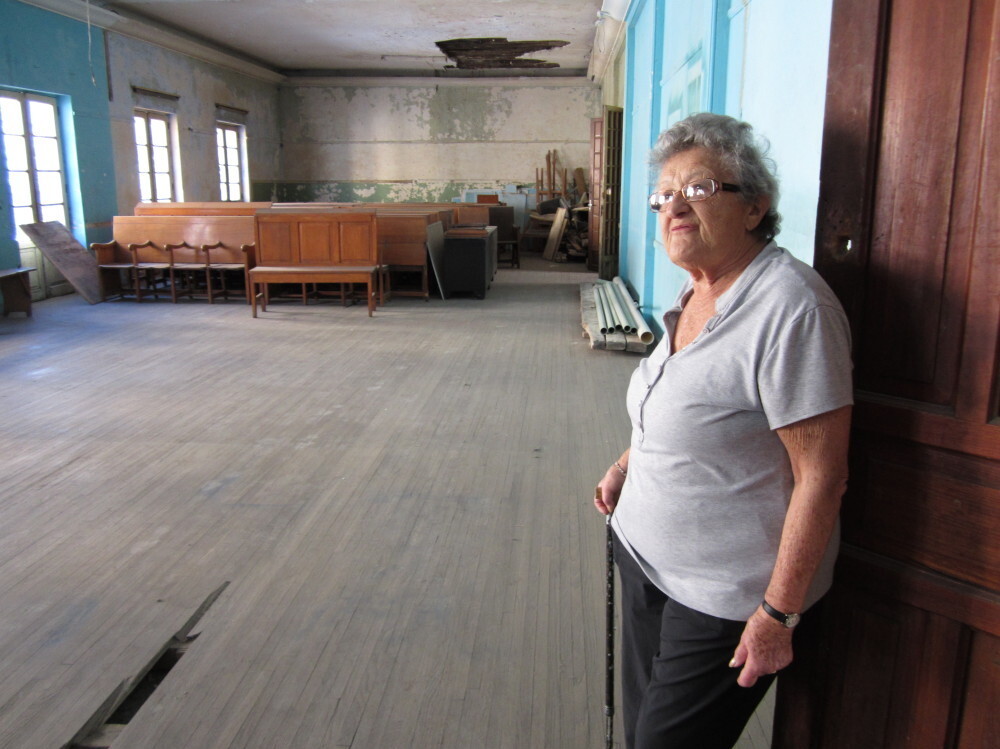 Dora Schmidt, 87, stands in the old temple restaurant on Justo Sierra street, where Motele and Etel Shlejter served their legendary food. Schmidt's wedding was catered by the Shlejters some 65 years ago.

The food conjured up distinct, comforting memories for Jews from Eastern Europe who found themselves in strange, foreign Mexico. For me, generations later, my strongest food memory is of Mexican food. Every year when I was growing up, we'd go "home" to Mexico for Passover. When I eat a spicy turkey sandwich between two pieces of matzo, feelings of being surrounded by family in a safe, loving place come simmering up.

I wanted to see if I could find this Justo Sierra spot that gave my grandparents those same special feelings about their past. There was just one problem — my maternal grandparents didn't know where Justo Sierra was.

Luckily, my dad's mother, Dora Schmidt, still lives in Mexico City. She was born in Poland but moved to Mexico City when she was 3 years old. She's 87 now and has 16 grandchildren who call her "Bobe." When I tell her about the Justo Sierra memory that my paternal grandparents mentioned, she instantly knows what I'm talking about. We hop into her little red car, and speed through wild traffic — as she curses at other drivers in Yiddish along the way.

And to learn more about Mexican Jewish food, visit Challa-peño — the blog where Alex Schmidt and her mother, Susan Schmidt, share their thoughts and recipes.

When we arrive at the legendary Justo Sierra spot, she points out the synagogue that was the main Ashkenazi shul (temple). There was a caterer named Motele Shlejter, she explains. "His wife was the one ... [who] used to cook for all the affairs going on in the shul."

"She used to make chicken broth with kreplach [dumplings], and with all the goodies that the Ashkenazim used to eat with the soup," Bobe recalls. "She used to make veal with kugel ... so delicious that it was amazing."

About 100 years ago, the Jewish community was centered in Mexico City's bustling downtown. The community started out small, with just a few hundred Jews, so everyone knew the place to find the best traditional food in town. Today, Jews have scattered across the city. Most days the old temple just sits there, empty. On the busy street, you could almost miss the elaborate wooden doors with Jewish stars. 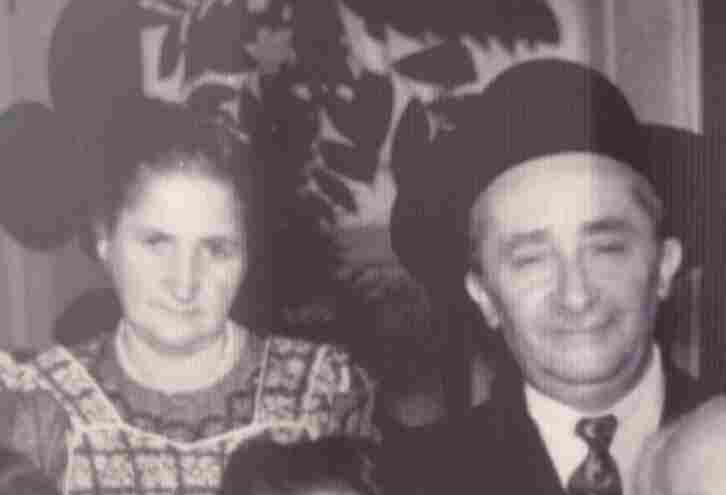 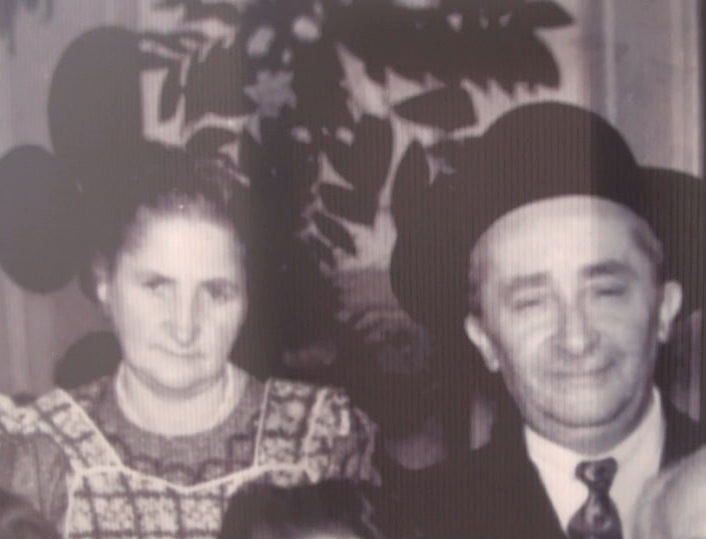 A photo of Etel and Motele Shlejter still hangs in the Nidjei Israel Temple in Mexico City.

My grandmother walks into the temple where she got married — it's been decades since she's been there. "It's amazing," she says. "I can't believe myself that I'm here, 65 years later. It's something unbelievable."

It turns out that photographs and 50-year-old grease stains on the walls in the old kitchen would be the closest I'd get to the fabled recipes. Only one of the Shlejters' children got married, and their lone grandchild, in a strange and tragic story, killed his parents and went to jail. As far as I can tell, the recipes just didn't survive through the generations for us to learn how the Shlejters gave their food its special flavor. 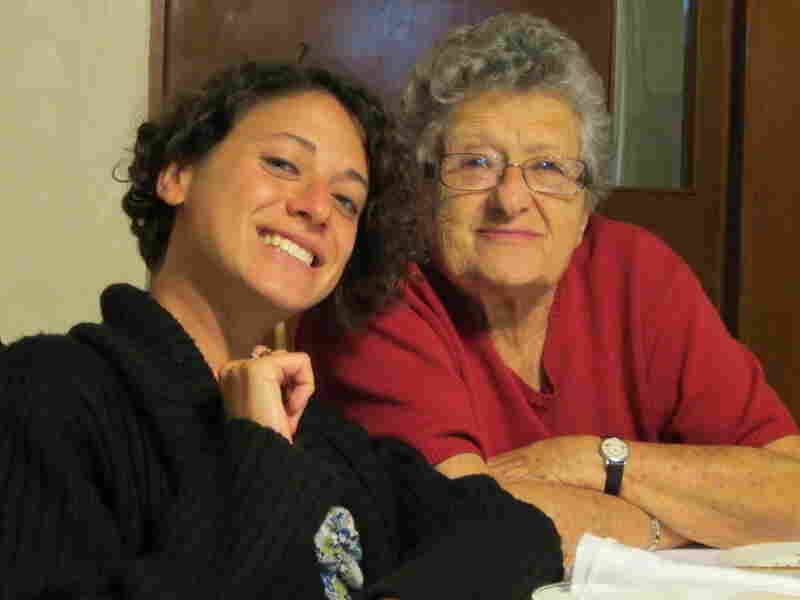 Dora Schmidt (right) was born in Poland and moved to Mexico City at age 3. She now has 16 grandchildren, including Alex (left). Anita Schmidt/ hide caption 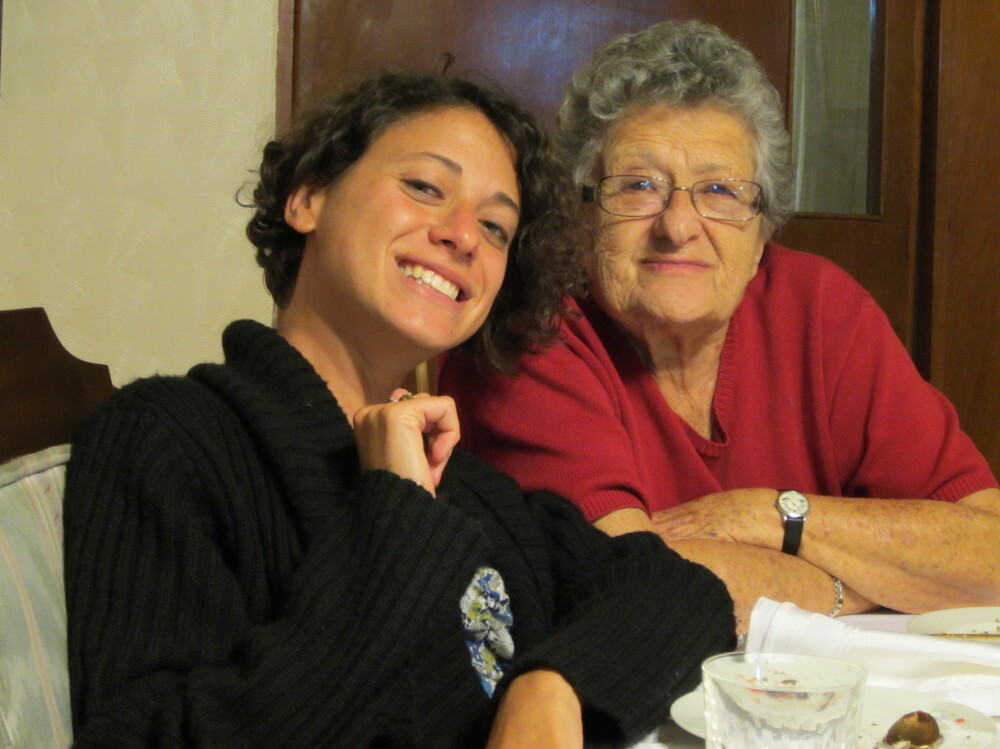 Dora Schmidt (right) was born in Poland and moved to Mexico City at age 3. She now has 16 grandchildren, including Alex (left).

My grandmother says she would love to ask Etel how she made her food — but everyone has secrets, Bobe says, and even if Etel were alive today she's not sure she'd share hers. Bobe likes to play at being mysterious, but she did let my sister and me in on her culinary secrets — we filmed her cooking in her little apartment.

She showed us how to make delicate horseshoe-shaped walnut cookies, typically served at Mexican weddings. As far back as I can remember she's served them at Shabbat dinner, alongside Jewish mandelbrot — almond bread — pastries.

For a snack, Bobe fried up rinds of chicken fat with onions, shtetl style, and put them in a taco with guacamole and chili. As I watched her through the camera, flavors and memories mixed together in layers — the Eastern Europe of my great-grandparents, and the taste of home in Mexico City. 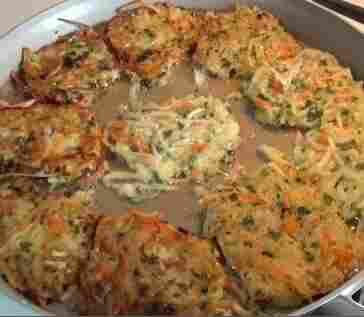 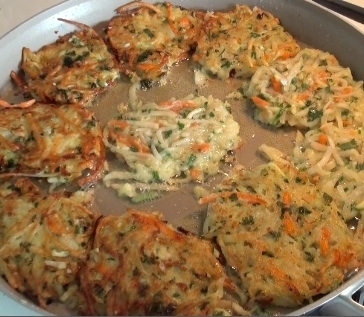 Blanche the potatoes and the carrot in boiling water for 3 minutes, remove from water and allow potatoes to cool. Once cool, peel the potatoes and carrot, and shred them in a food processor along with the zucchini and onion. Transfer mixture to a medium-size mixing bowl.

Add the rest of the ingredients, mix well and allow the mixture to sit for 10 minutes.

Pour about 1/4 cup of canola oil into a frying pan and heat well. Take about 1/4 cup measurements of mixture and place one by one in the hot oil, flattening out each latke with the back of a spatula. It will take about 5 minutes for the latkes to brown, then turn them over and brown them on the opposite side. As each latke is ready, remove it to a baking pan lined with paper towels to absorb excess oil.

Serve the latkes while still warm. They may be accompanied with applesauce and/or sour cream. We accompanied them with jalapeño jelly from the farmers market and with Crema Mexicana, a delicious Mexican-style cream. 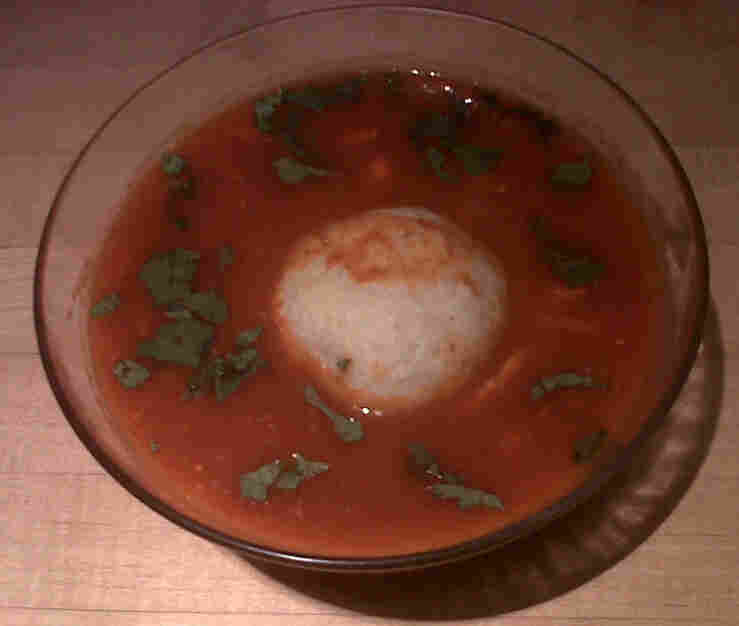 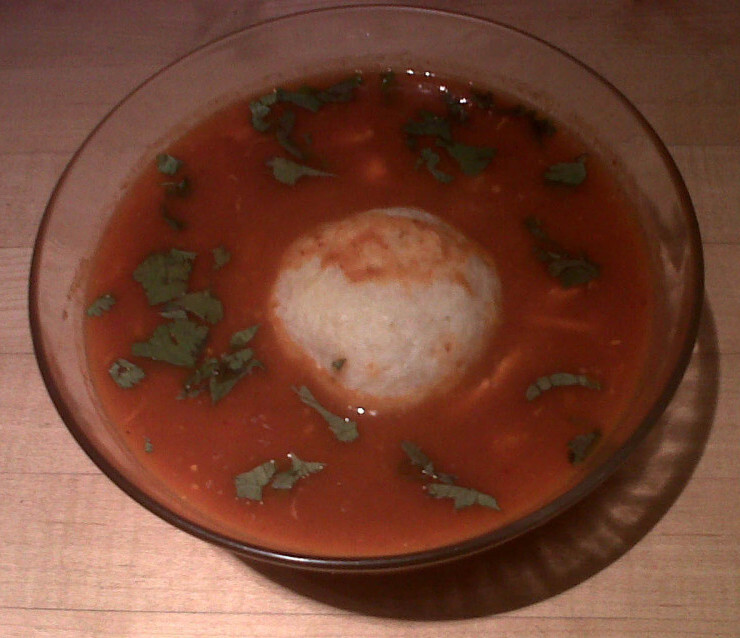 The pozole with matzo balls soup contains hints of chili, tomato and hominy.

Pozole is a quintessential Mexican, spicy soup — sometimes tomato-based, sometimes green tomatillo-based, and sometimes based with clear broth. It's a staple there, found in most restaurants that serve typical food. Since it's often made with a pork base, we adapted the recipe using the stock from our own chicken soup. Despite the ubiquity of pozole, the specific mix of flavors varies widely everywhere it's served. Our home is just another one of these places.

The reason there are several steps to this recipe is that the chicken stock adds the core flavor of the soup. After that, the stock is blended in with the Mexican touches of chili, tomato, hominy. (Note: Because the blending step is done in three portions, this recipe does not halve easily.) Then finally, the matzo balls are added. Stick with it, though — the three alternating Mexican and Jewish steps in the recipe are worth it.

For the chicken stock: In a large stock pot combine 3 quarts of cold water, chicken, onion, garlic cloves, leek, parsley, cilantro, bell pepper, and 1 teaspoon of salt. Bring to a boil over high heat. Skim off any foam that comes to surface. Reduce heat to medium-low, cover, and simmer 15 minutes. Add pepper, bouillon and 2 teaspoons of salt and stir to combine. Cover and continue simmering about 10-15 minutes or until chicken is tender and just cooked. Remove the chicken to a plate and set aside to cool. When the chicken is cool enough to handle shred to make 3-4 cups. Set aside. Uncover pot and allow the stock to cool for 20 minutes. Pour the stock through a strainer and discard boiled vegetables.

For the pozole: Working in three separate batches, combine (in each batch) 3 cups of chicken stock with 1/3 of the following ingredients: tomato sauce, tomato paste, tomato, onion, garlic, jalapeño, cilantro, chili flakes and salt in a blender. Pulse until smooth. Pour mixture into a large pot with hominy and shredded chicken and repeat the process with remaining ingredients two more times. When all the ingredients have been pureed and added to the pot, stir to combine. Bring to a boil over high heat and skim foam off of surface. Reduce heat to medium-low and simmer uncovered for 20 minutes.

For the matzo balls: In a medium bowl, beat eggs with an egg beater, then add water, oil, salt and pepper. Mix well. Add matzo meal and stir thoroughly with wooden spoon. Set aside uncovered in the refrigerator for 30 minutes. While the matzoh mixture is resting, in a large pot bring 3 quarts of water to a boil over high heat. Remove matzo mixture from the refrigerator. With damp hands form small balls about the size of a walnut to make 15 matzo balls. When the water comes to a boil, carefully add the balls to the boiling water. Once the water returns to a boil, reduce the heat to medium, cover and simmer for 40 minutes or until consistency is fluffy and matzo balls are cooked throughout.

Ladle soup into bowls and add one or two matzo balls per serving. If desired, serve with garnish ingredients. 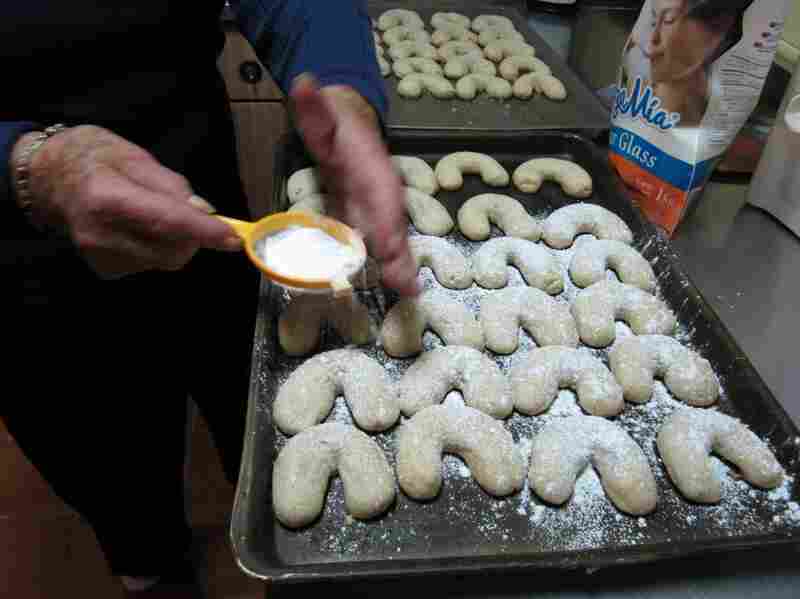 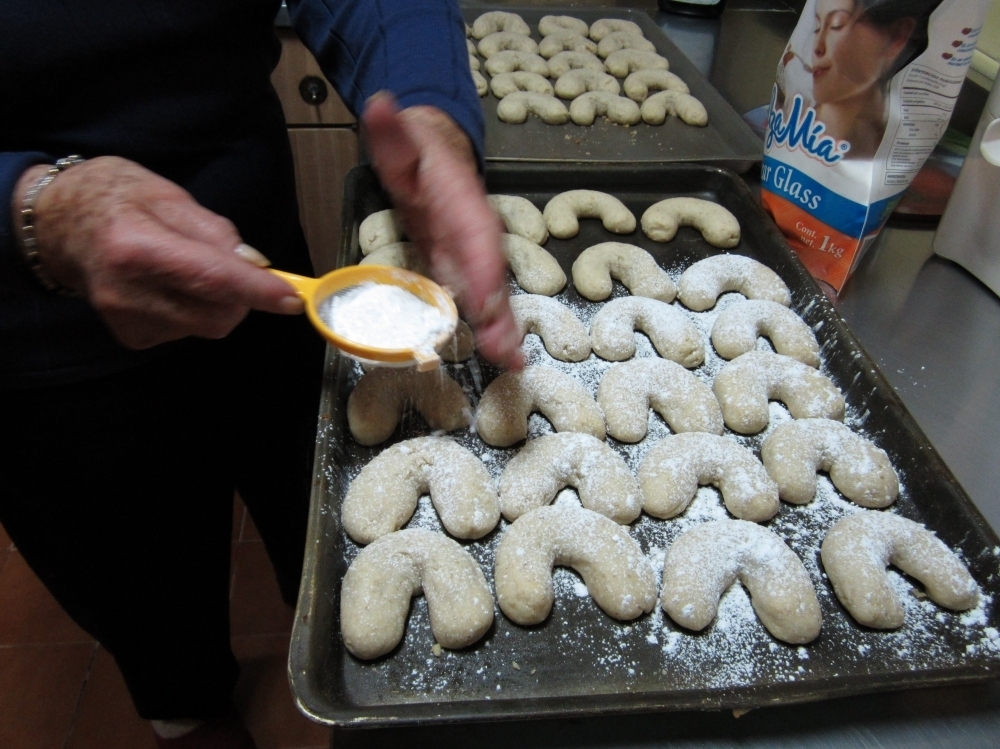 Dora Schmidt learned this recipe from a Mexican Jewish friend, originally from Poland, many years ago. The cookies are, however, traditionally served at Mexican weddings.

Knead together walnuts, margarine, sugar, vanilla and salt in a large bowl until all ingredients are combined and mixture is even. Using the amount of an extra large walnut, roll dough into a thick rope and form horseshoe or u-shaped cookies. Place cookies onto 2 baking pans sprayed with a small amount of cooking spray. Preheat oven to 200 degrees. Bake cookies for 15 minutes. Cookies are done when they are no longer shiny, and have grown slightly. Do not allow to brown. Remove from oven and allow cookies to cool roughly half an hour. Sprinkle confectioner's sugar over the cookies.