Accessibility links
Trees In Trouble: Grim Future For Frankincense The wise men would be one gift short at the manger — frankincense, one of the gifts given to the baby Jesus, is now in short supply. The trees from which the fragrant resin is produced are declining, and in 15 years, frankincense production could be cut in half. 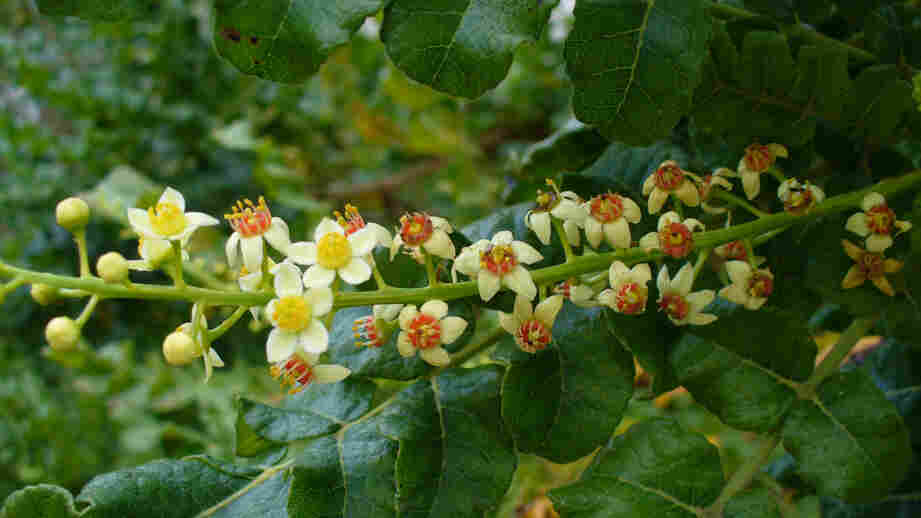 Frankincense comes from the Boswellia sacra tree, which grows mainly in the Horn of Africa. The number of trees that produce the fragrant resin could decline by 90 percent in the next 50 years. scott.zona/flickr hide caption

The original Christmas presents were gold, frankincense and myrrh. That's what wise men brought to the baby Jesus, according to the Gospel of Matthew. Frankincense is still used today — for perfumes, incense and traditional medicines — but a new study suggests that its future looks grim.

The trees that produce this fragrant resin are in serious trouble, says Frans Bongers, a forestry expert at Wageningen University in the Netherlands. He says production of frankincense could be cut in half in just 15 years. And in the next 50 years, tree numbers could decline by 90 percent, according to his new study published in the Journal of Applied Ecology.

Frankincense comes from various species of Boswellia, a tree that mainly grows in the Horn of Africa and the Arabian Peninsula. People make cuts in the bark and let the tree sap ooze out. After it hardens into yellowish lumps, they come back to collect it, and then make more cuts. "And so they come back every two weeks for the whole dry season, and that's about nine months," Bongers explains.

They found that the forests were declining, regardless of whether they were tapped for frankincense or not. In general, they found big, old trees that were dying at an alarming rate, possibly because of insect attack.

He says that's because they burn up in fires set by farmers or are eaten by grazing cattle.

The only hope of preserving frankincense is to set aside large areas, to let young trees get established, says Bongers. But that's a hard case to make when local people are struggling to make a living.

Already, in some countries, like Yemen and Oman, says Bongers, the frankincense is almost gone.