Accessibility links
Fears Renewed In Iraq With Wave Of Violence In the week since U.S. troops withdrew from Iraq and Washington announced the end of the war there, bombs have killed scores in Baghdad and the government is being driven by sectarian discord. NPR's Sean Carberry speaks with host Audie Cornish about the latest events from Baghdad.

In the week since U.S. troops withdrew from Iraq and Washington announced the end of the war there, bombs have killed scores in Baghdad and the government is being driven by sectarian discord. NPR's Sean Carberry speaks with host Audie Cornish about the latest events from Baghdad. 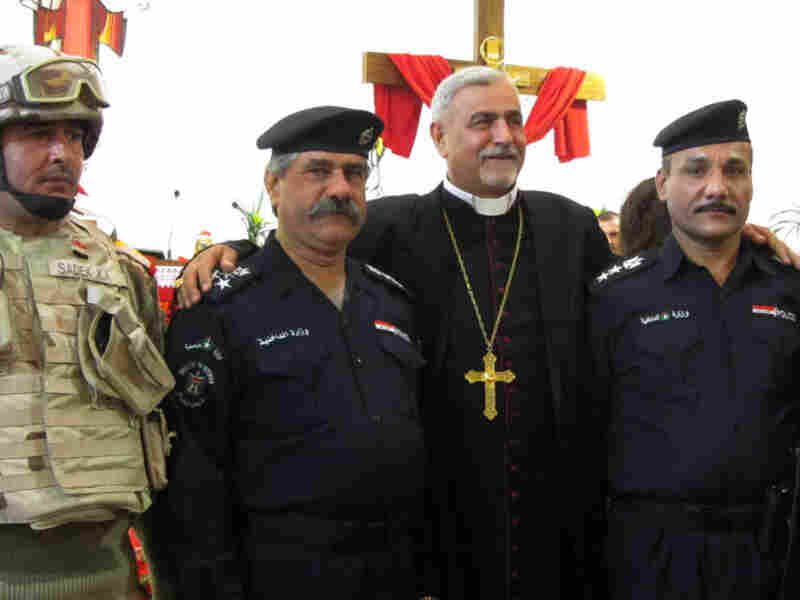 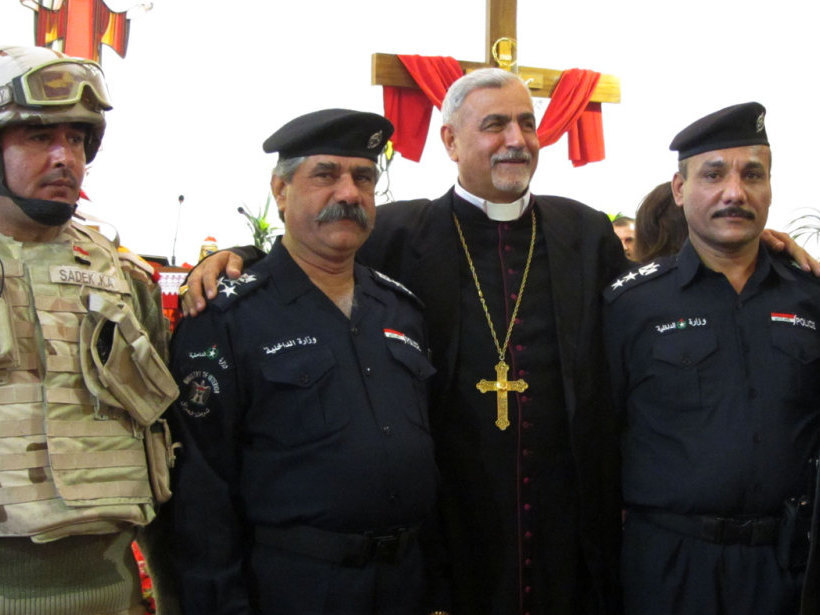 After delivering mass, Monsignor Pius Kasha poses with security officials who are guarding the Syriac Catholic church in the Mansour neighborhood in Baghdad.

CORNISH: This, one week after the last U.S. forces left Iraq for good - a withdrawal that has been followed by a week of bloodshed and political chaos. NPR's Sean Carberry joins us from Baghdad to talk about the latest. Good morning, Sean.

CORNISH: It's been a very difficult week in Iraq: 16 different explosions rocked Baghdad on Thursday, killing 70 people and wounding almost 200. Has anyone claimed responsibility for the bombings?

CARBERRY: So far, there's been no claim for responsibility but there have been plenty of accusations of responsibility. Politicians in Iraq were very quick to come out to condemn the bombing, condemn what went on. But they were also quick to try to score some political points. Opponents of Prime Minister Nouri al-Maliki were quick to say that this was an example of him being unable to maintain security in the country and therefore he needs to go. People in the Maliki camp were saying that other people are politicizing this issue, accusing the vice president, Hashemi, who's already being charged with running assassination squads. One thing that we do know is yesterday Prime Minister Maliki announced that four security officials were arrested in connection with the bombing. We don't have much detail on their rank or their level of involvement. But so far, four people inside the government have been arrested in connection with the bombings.

CORNISH: In fact, the prime minister's accused the vice president of ordering assassinations. Is that correct? 'Cause now we're seeing that the vice president claims the government was behind this week's bombings. What's going on here?

CARBERRY: Right. This is sort of this continuing war of words. A week ago, an arrest warrant was released, saying the vice president has been running assassination squads. He quickly fled north to Kurdistan and has been taking refuge there. And Prime Minister Maliki and some of his supporters have said that the vice president was behind these bombings. Again, no proof one way or the other. Everyone sort of wondering, you know, what's the breaking point here? Is there going to be a deal to avoid this devolving into sectarian conflict?

CORNISH: And, Sean, what's the U.S. response been?

CARBERRY: The U.S. response has been fairly muted. Basically, they've been calling on all sides to work this out peacefully, to follow Iraqi rule of law, to follow the judicial process. But beyond that, they really haven't said much nor showed much sign of exerting influence over this.

CORNISH: And what's the mood on the street in Baghdad? Do people connect any of this to the withdrawal of U.S. troops?

CARBERRY: The mood in general is pretty dark right now. People don't directly connect this. People have said to this that they knew the troops were leaving and that they didn't feel U.S. troops were a big part of what was happening on the ground in recent months anyhow. But they say that, you know, the politicians now are playing games with each other, are going after each other and the people are suffering. And there's a very bleak outlook right now; people even reluctant to talk to us, looking around nervously when we approach them on the sidewalk - behavior that's pretty atypical from our experience here. One person I spoke to, a gentleman named Namir Zamma(ph), who actually worked as a translator for the U.S. military - spoke to him this morning and here's what he had to say about things:

NAMIR ZAMMA: I hope, I hope that everything will be OK or all right. But if you ask me about my opinion, I will leave.

CARBERRY: He's saying he wants to take his family and head to the U.S. He's actually a member of the Christian community. I spoke to him outside a Christmas mass this morning. So, he's facing multiple levels of fear, being a Christian minority, someone who worked with the U.S. and someone who feels that things are just not going well right now.

CORNISH: That was NPR's Sean Carberry in Baghdad. Thank you, Sean.