Accessibility links
Now Hovering Above Us All: 'The Cloud' The days of keeping large files on your home or office computer are waning. Instead, documents and files are accessible from nearly any device, anytime from anywhere. But what exactly is this place called the cloud? 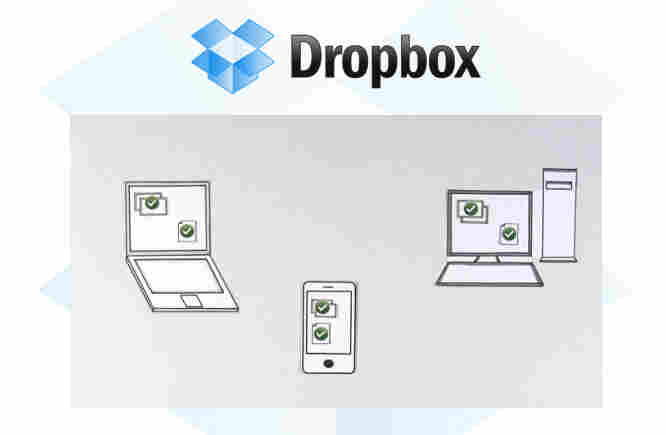 The cloud became a common term in 2011. Here, a screengrab from the Dropbox website shows how the cloud-based data storage service shares the same information on multiple devices. NPR hide caption 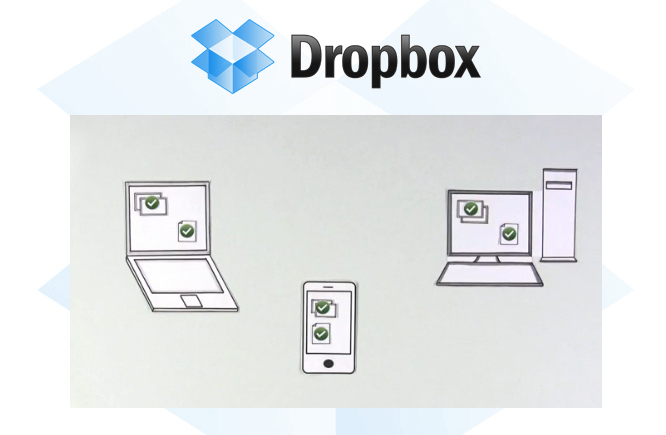 The cloud became a common term in 2011. Here, a screengrab from the Dropbox website shows how the cloud-based data storage service shares the same information on multiple devices.

The digital cloud became a household word in 2011.You can now store and share things via the Internet in ways you never could before. But what does the cloud look like, and where can we find it?

The section of the cloud we visited has a lot of concrete and security.

Behind a ballistics-grade door, data center owner David Sabey ushers us into a spotless Seattle-area facility the size of nine football fields. It's crammed full of racks upon racks of powerful servers, sophisticated computers that serve up information. There are lots of blinking lights and wires everywhere.

"Some of the compute cycles going on here could be providing a product for someone in Florida, California, to Alaska," Sabey says. "So that's what a cloud looks like."

Well, sort of. Basically, the cloud is a fancy way of saying the Internet.

Lots of us have been using Yahoo or Gmail — so our email lives in the cloud, not on our computer. But email was just the beginning. This year, the cloud brought us something we didn't even know we were craving: a digital storage locker.

Think back to high school, when you stuffed that metal locker with books, homework projects, photos of friends, and maybe records or CDs.

But that music and everything else existed in only one physical place — you couldn't really drag that locker around. If you forgot to get something and went home for the day — well, you were out of luck.

But now, the old "I left it in my locker" excuse just won't work anymore.

"If I store my information online in one of these clouds," says Forrester Research senior analyst Frank Gillett, "it's as if I have a magic courier that will run and retrieve stuff from my locker and retrieve it for me, instantly."

The "magic couriers" have names like Apple and Amazon, Google, Microsoft and upstarts like Dropbox. And in 2011, they ramped up their offerings and marketed them like crazy.

The services deliver e-books, photos, music and lots of other things from your cloud-based locker. And they'll make deliveries to almost any digital gadget.

But businesses use the cloud differently.

For them, the cloud can function a bit like a giant kitchen you can rent. In the past, companies would often build their own kitchens, with enough ovens to prepare things they might only need once a month.

A company might need one or two ovens — or servers — for just an hour each week, to do its payroll. Or it might need 100, to manage a worldwide network of customer accounts.

Companies pay only for the time and equipment they actually use, via the cloud.

Businesses also use the cloud for takeout. For example, instead of building their own accounting system, they can use a pre-made, cloud-based one. And the results can be delivered right to their front door.

"We literally charge our customers on a per-hour basis for the resources they are consuming," says Byran Thompson of Tier 3, a rapidly growing Seattle-area company that helps other companies use the cloud.

Whatever the figure, it's often less than a company would spend to do the task on its own — and it's more convenient.

Companies can also rent time to do projects on an almost unimaginable scale. One example comes from Adam Selipsky, a senior official at the part of Amazon.com that provides cloud services.

"We recently had a large pharmaceutical company, who's our customer, spin up 30,000 virtual servers to do mathematical modeling," Selipsky says.

There are very few companies that could afford, or even want, to manage something that big.

In so many ways, 2011 was a banner year for the cloud. And next year's cloud offerings are likely to be even bigger and better.