Accessibility links
What's Holding Back One 'Job Creator'? Not Taxes The millionaire owner of one Kansas company says his business is stifled — but not from taxes or a sluggish economy. He says he can't find workers to fill open jobs. One problem is that prospective employees won't relocate to rural Kansas, he says.

There aren't many people on the broad Kansas prairie, but there is industry. 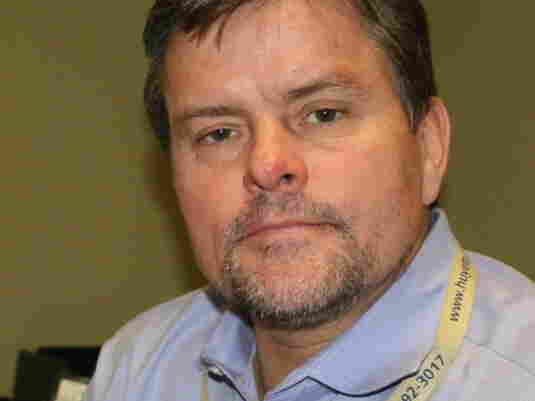 "We've got the space, we have equipment, we've got the cash, we've got the customers, we have the product," says Tim O'Keeffe, owner of G.L. Huyett. "We have everything we need — except the people." Frank Morris /KCUR hide caption 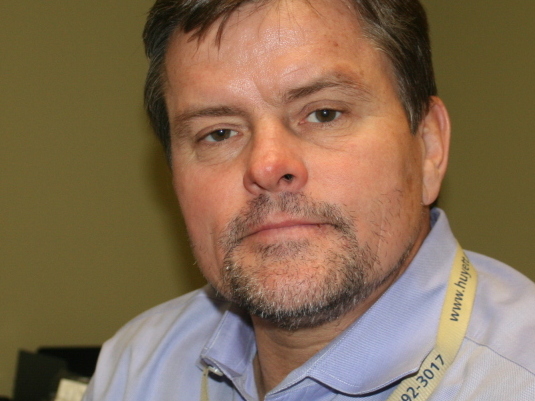 "We're a supplier of last resort," says Tim O'Keeffe, who owns the company. If you have disruptions in the supply chain and someone can't meet a shipping time, he says, G.L. Huyett can step in.

It may sound marginal, but it's not: About 100 people work here doing manufacturing, selling and shipping. That's up from just four employees 20 years ago. Longtime employee Wayne Arthur works long hours to keep up with demand.

"It's been 10-hour days and half-days on Saturdays," he says. "And that's been since, probably, April?"

Record sales are earning O'Keeffe a bundle. Under a plan proposed by Democrats, he'd have to pay a surtax on income over $1 million.

Republicans have slammed the so-called "millionaires surtax," saying it would hit job creators. An NPR search earlier this month for a job creator who makes that kind of money and opposes the surtax idea came up blank. Senate Majority Leader Harry Reid called such "millionaire job creators" "unicorns" — hard to find and, in fact, nonexistent.

Because the small business is set up as a subchapter-S corporation, all the company's profits are counted as income for the owner. O'Keeffe says the surtax would hurt his business more than his personal bank account. It would cut into his profits, which he says he needs to invest in order to expand and stay ahead of the competition.

But it is not taxes, or even the threat of them, that stops O'Keeffe from hiring and filling a new building. It's something else.

He can create jobs, but he can't fill them.

There are two issues here: For one, the company is picky, and O'Keeffe admits it's not the easiest place to work; he expects a lot from his employees. But the main problem, he says, is location. No amount of recruiting seems sufficient to get people to move out to Minneapolis, Kan., population 2,000.

Patrick Arvelo, a teenager sitting in a barbershop in downtown Minneapolis, says it is friendly, but he plans to leave right after graduation.

"I mean, there's just not a lot of people to meet, really," he says. "You're kind of stuck with the same people."

O'Keeffe understands why potential employees might miss city life, but not why they won't follow work as urgently as Americans did in the Great Depression.

"When I see the state of Michigan with unemployment rates north of 10 percent, I don't understand why those people, just like Tom Joad did in the Dirty '30s, jump in the car, throw Grandma on the roof, drive to Kansas and work for a productive, 100-year-old company like G.L. Huyett," he says, referencing John Steinbeck's The Grapes of Wrath.

Americans are not moving like they used to. The mobility rate now is the lowest on record.

"We're really just stuck, I guess you can say," Bill Frey, a demographer at the Brookings Institution, says.

Frey says Americans are digging in, even where jobs are scarce.

"In fact, Michigan is no longer losing population," he says. "Now that's after several years of having some outmigration. You could make the case there that the people who wanted to leave have already left, and the rest of them are happy to stay there and ride it out."

That's bad news for G.L. Huyett — and potentially for Minneapolis, Kan. O'Keeffe says if he can't crack this mobility problem, he's going to have to take at least part of his job-creation machine someplace else.