Accessibility links
Police Say They Aimed For Restraint With Protesters Police learned to monitor the Occupy protests through livestreams and Twitter feeds. But there is no national standard for dealing with passive resistors. And sometimes that can lead to pepper spray incidents. 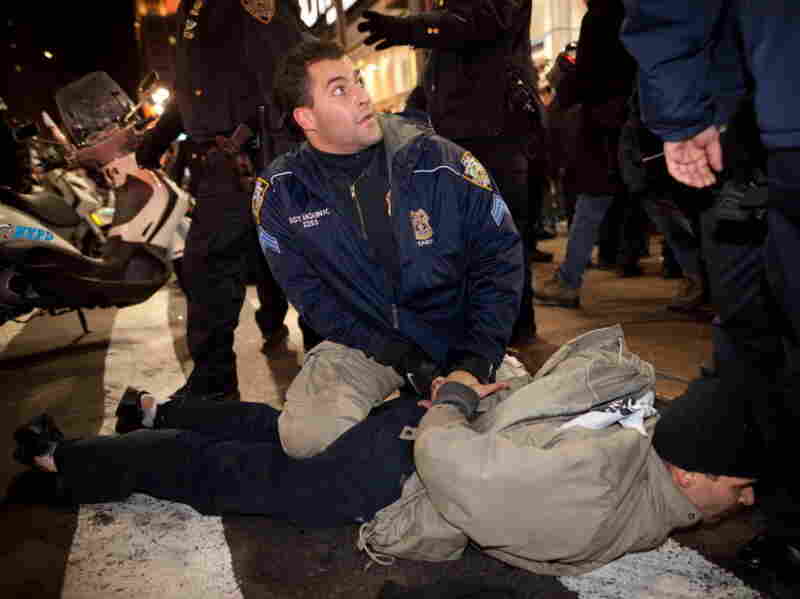 A police officer pins an Occupy Wall Street protester in New York City on Dec. 17. Police in different cities have found their own responses to the ongoing protests. John Minchillo/AP hide caption 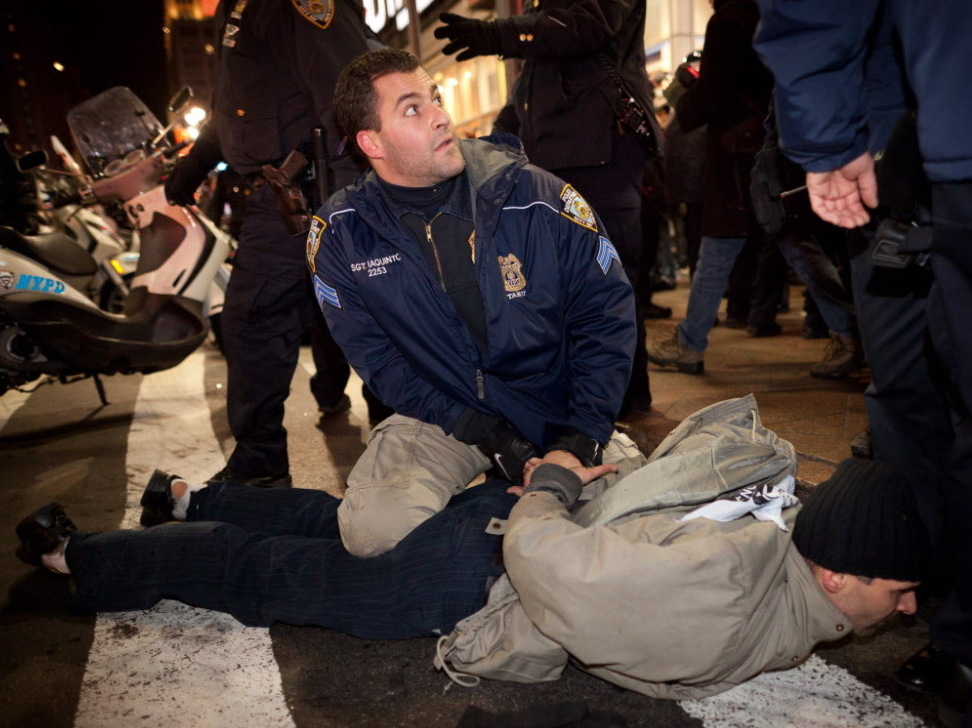 A police officer pins an Occupy Wall Street protester in New York City on Dec. 17. Police in different cities have found their own responses to the ongoing protests.

This fall American police were confronted with something they hadn't seen in 40 years: prolonged, simultaneous political protests across the country. In most cities, police showed restraint. But there have been exceptions — sometimes involving copious amounts of pepper spray. Those flashpoints have become a cause for concern.

Chuck Wexler runs the Police Executive Research Forum — a private think tank. It puts out reports, holds conferences, and a couple of months ago, it held two conference calls for police departments to compare notes on the "Occupy" protests. Because of those calls, Wexler soon found himself being accused of being the mastermind of a nationwide crackdown.

"I don't know where that comes from," Wexler says.

Blogs and indie news sites speculated that Wexler was delivering marching orders to local police chiefs. The very notion makes Wexler sigh. "Look — you can't tell Mayor Menino in Boston what to do or Mayor Bloomberg — policing is a very decentralized thing."

Wexler points out that each city had a different dynamic with the local Occupy protests, and he says it's absurd to try to find evidence of a national crackdown. If anything, he says, there was a national trend toward police restraint.

"I think it's a sign of the times that the police are much more patient and willing to wait another day and maintain good communications with the leaders," Wexler says.

Look — you can't tell Mayor Menino in Boston what to do or Mayor Bloomberg — policing is a very decentralized thing.

Communication, he says, was the key to peaceful interactions between police and Occupy in places like Boston and Los Angeles. LAPD public information officer Andrew Smith describes a "working relationship" with the people camped outside City Hall.

"I would walk through there on a daily basis, sometimes two or three times, get to know people, and then they'd let us know, 'Hey, we're planning a protest, and planning on having people be arrested,' and we'd facilitate that," Smith says.

Police departments also learned to monitor the Internet. At a recent Occupy march to the port of Seattle, the crowd was organized by a protester with a bullhorn as it grew.

The bullhorn guy established color-coded zones — a green zone for protesters who wanted to stay safe, a yellow zone for those wanting to live a little more on the edge and a red zone with a higher risk of arrest.

As the protesters organized themselves, they were also live-streaming on the Internet with iPads — and the audience included the Seattle Police.

"And that's information we pass on to the operational folks. Because the people that are down in the street, the incident commanders and the field commanders that are responsible for deployment for personnel at the event — they aren't everywhere at once," Barden says.

Police departments across the country say Occupy's livestreams, Twitter feeds and other open Internet chatter have been a big help in judging ahead of time the size of a demonstration, and whether it might become confrontational. Daniel Ojalvo, a volunteer with Occupy in Seattle, says this sort of police monitoring doesn't bother him.

"I think that's a good thing! We're non-violent; we don't have anything to hide," Ojalvo says.

But Ojalvo rejects the notion that police departments have tried to communicate with Occupy. And, as far as he's concerned, the police have actually shown very little restraint.

"We've been noticing a lot of violence against protesters engaged in non-violent civil disobedience and even protesters who are just exercising their First Amendment rights," Ojalvo says.

In Seattle, the poster-child for police violence is Dorli Rainey — a diminutive 84-year-old who was marching with Occupy in November when police broke out the pepper spray.

"The pepper spray started coming indiscriminately — it was a big flow, like a fountain. And I got it full-face," Rainey says.

Seattle, New York, University of California Davis — the pepper-spray incidents are now notorious. But are they the exception, or the rule?

Lorie Fridell, an associate professor of criminology at the University of South Florida, studies the use of force by police.

"We actually found that four in ten agencies around the country authorized the use of pepper spray or other kinds of chemical weapons against passive resistors," she says. By "passive," she means people who go limp, but don't fight or evade officers in any way.

"Now what's important to point out is that means six in ten agencies have decided that using that type of force is inappropriate. I'll point out that only one in five agencies would allow for Taser use in a passive-resistance situation," Fridell says.

So there's no national standard — each department has its own rules. But what concerns Fridell is that the rules themselves are coming under attack.

In the last few years, she says, there's been a movement away from something called "use of force continuums" — basically, formulas that instruct cops to start with a minimal amount of force, and then work their way up the ladder.

She says continuums have reduced police violence in recent decades, but now many police unions and trainers call the rules too restrictive. So in many cases, not only is there no national policy on things like the use of pepper spray, but in many departments, that policy is often left to the judgment of individual officers.