Accessibility links
Aaron Paul: Playing Bad On 'Breaking Bad' Student-turned-drug dealer Jesse Pinkman was supposed to die in the first season of the AMC drama. But the writers decided the chemistry between high school teacher Walter White (Bryan Cranston) and Jesse (Aaron Paul) was too good to let go. 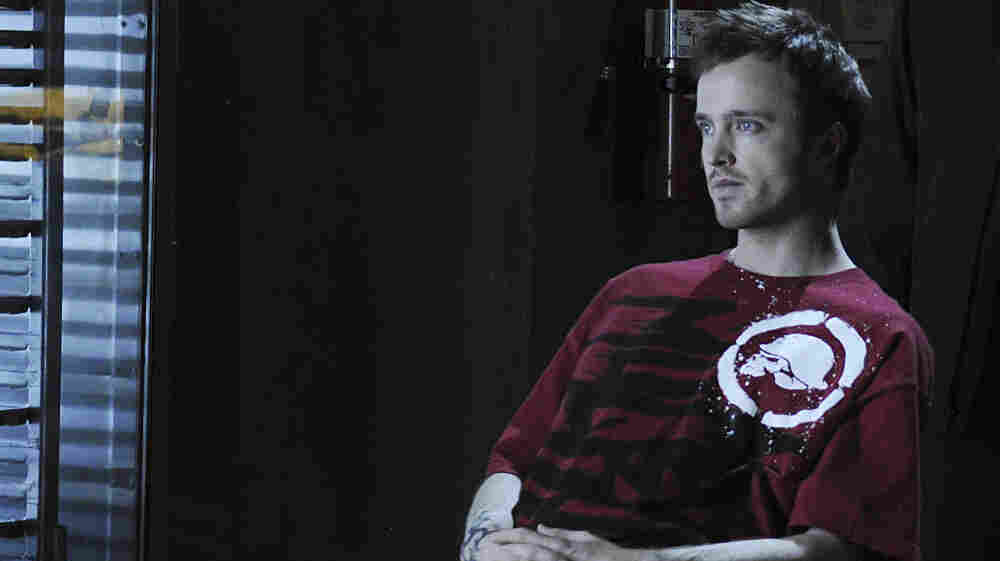 This week on Fresh Air, we're marking the year's end by revisiting some of the most memorable conversations we've had in 2011. This interview was originally broadcast on September 19, 2011.

Paul joins Fresh Air's Terry Gross for a conversation about the show and about playing a meth dealer who frequently finds himself in precarious situations. Over the past four seasons, his character has laundered money, killed one of his meth-making co-workers and taken a lot of punches from other drug dealers. And Paul says some of those punches really hurt.

In one take of a fight, "my head actually comes into contact with the opening of a wooden screen door," Paul says. "And I catch it, and my entire body spins around and splits the door into a million pieces and I landed flat on my head and chest. The scene continues to go on because [everyone] thinks I was just acting, but in reality, I was just completely out of it and I don't remember it happening."

Vince Gilligan: The Man Who Made 'Breaking Bad'

Paul ended up going to the emergency room and being treated for a concussion after that scene. It also may explain why the next fight scene featuring Paul was shot mainly in shadows, making it difficult to make out the characters.

"I think they didn't want that to happen again," he says. "They also didn't want to hurt [the character hitting me]. He was beating a sandbag next to my face so he could actually come into contact with something. I remember the day of that shoot, we did it so many times that [the actor's] knuckles actually started getting bruised."

On Not Getting 'Killed Off' The Show

Originally Jesse Pinkman was supposed to be killed off Breaking Bad during the show's first season. Paul says he didn't learn that until series creator Vince Gilligan called him over one day during lunch.

"He goes, 'Originally Jesse was supposed to die at the end of this season,' ... and instantly my heart dropped and slowed down a bit," Paul says. "And he said, 'We don't think we're going to do that anymore.' "

Gilligan told Paul that he loved the chemistry between Walt and Jesse.

Other cast members, including Bryan Cranston, would joke around on set with Paul about his character's potential demise.

"Bryan would come up and give me a hug and say, 'I'm not going to say anything but it was such a pleasure working with you. It's been an amazing past year-and-a-half, and you have a huge career ahead of you,' " he says. "They would always joke around about it. They've kind of slowed down about it, but who knows — this kid could die at any second."