Accessibility links
Dealing With Dictators: Is Exile Or Trial Better? Four Arab leaders have been driven from power this year, but only one is facing trial. Democracy activists say prosecution is necessary to establish the primacy of the rule of law. But some pragmatists say the threat of prosecution encourages dictators to cling to power rather than consider exile.

Dealing With Dictators: Is Exile Or Trial Better?

Dealing With Dictators: Is Exile Or Trial Better? 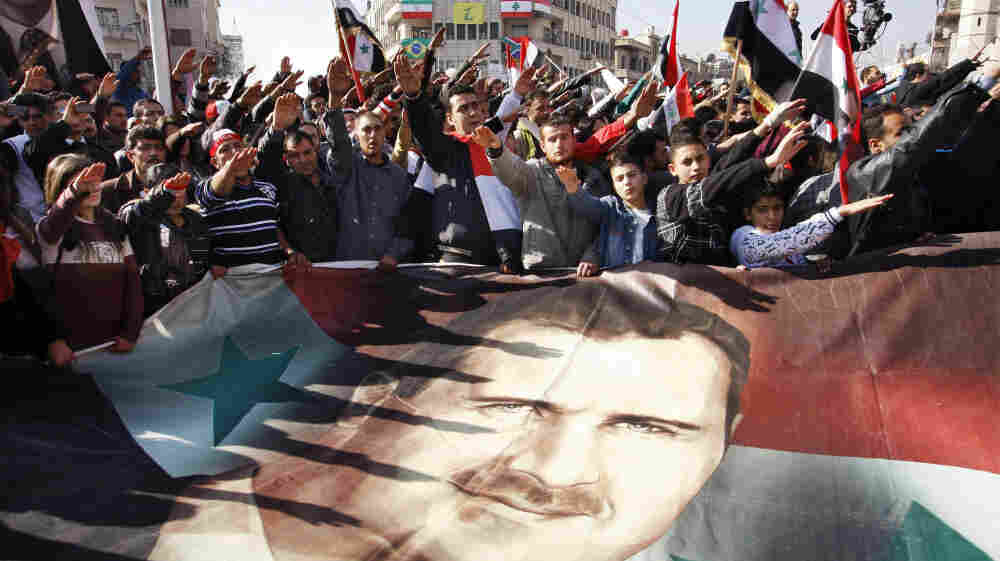 Critics of Syrian President Bashar Assad have been debating whether it would be better to threaten him with prosecution or encourage him to go into exile. Here, Syrians hold a rally supporting Assad in Damascus this month. Muzaffar Salman/AP hide caption 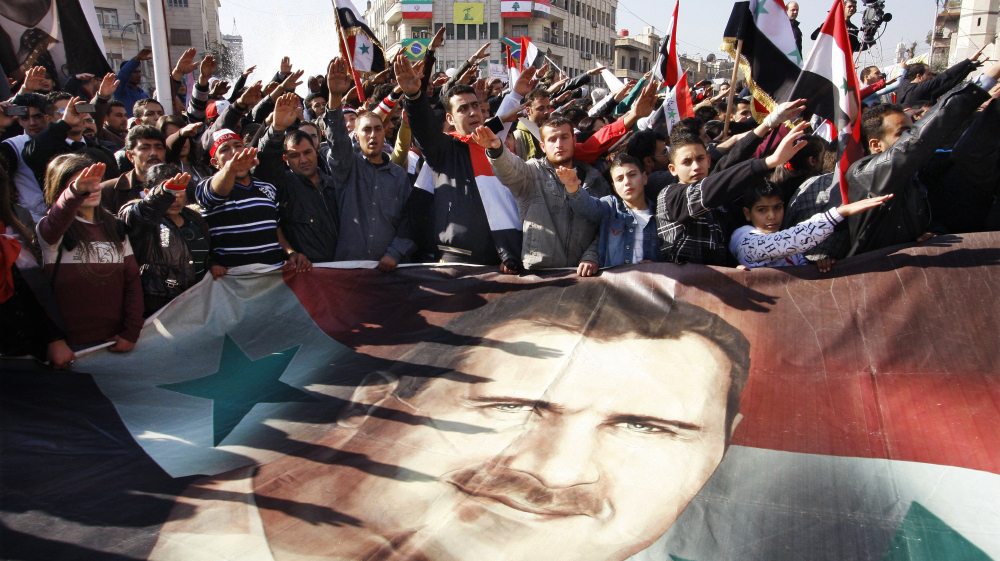 Critics of Syrian President Bashar Assad have been debating whether it would be better to threaten him with prosecution or encourage him to go into exile. Here, Syrians hold a rally supporting Assad in Damascus this month.

Here's a look at the legal issues surrounding Arab dictators deposed this year.

Tunisia: Former President Zine El Abidine Ben Ali fled to Saudi Arabia. Tunisian courts have convicted him in absentia of corruption charges, but there's no sign that he will be extradited.

Egypt: Ex-President Hosni Mubarak is on trial in Cairo on murder and corruption charges.

Libya: The International Criminal Court issued an arrest warrant for Moammar Gadhafi in June. He was killed after being seized by a mob on Oct. 20.

Yemen: After ruling for more than 30 years, Ali Abdullah Saleh signed a transfer-of-power agreement that gives him immunity from prosecution.

The death toll in Syria keeps mounting, as do the calls for the ouster of President Bashar Assad. But in dealing with Assad, should the international community threaten him with prosecution at the International Criminal Court or offer him a comfortable exile?

That question is being widely debated, and came up several times earlier this year with the ouster of other Arab autocrats. Last month, a United Nations commission found that Syrian security forces loyal to Assad had killed hundreds of children and perpetrated other "crimes against humanity."

That report has done nothing to quell violence against protesters in Syria. Some analysts believe an ICC indictment would be counterproductive. Assad, like other dictators before him, might dig in his heels in part to avoid the specter of prosecution.

"ICC indictments acquire a life of their own," says Stephen Rademaker, who served as an assistant secretary of state in the Bush administration and now is at the Podesta Group, a lobbying firm. "If you're the target of one, the international community has basically said to you that we're not going to allow you a peaceful exile."

But many think that the Assad regime should not be allowed to continue killing civilians by the thousands, and that international justice is one of the tools that can be brought to bear against such behavior.

"In the case of Syria, the ICC is an important additional tool to apply pressure on Assad," says Leila Hilal, a former Palestinian legal adviser who is now at the New America Foundation.

Hilal says it's crucial not just to drive autocrats from power, but to hold them to account for their actions. That sends an important signal that the new government must respect human rights and the rule of law.

"There has to be a way to address grievances in a way that is perceived as fair, especially in countries where the rule of law has been violated," says Melani Cammett, director of Middle East studies at Brown University. Cammett has advised activists within the region about transitional justice issues. "There's got to be a way to manage resentment so that people aren't in unregulated revenge mode."

Here's the current situation regarding prosecution of deposed leaders in several other Arab countries:

President Zine El Abidine Ben Ali fled the country by plane in January to Saudi Arabia. He followed a course taken years earlier by Idi Amin, the Ugandan dictator who was deposed in 1979. He eventually found refuge in Saudi Arabia, where he lived out the final two decades of his life.

Nevertheless, Tunisia is determined to examine Ben Ali's years in power. Since he fled, he's been convicted in absentia three times in Tunisian courts on corruption and other charges. Despite the convictions, there's no indication at present that Ben Ali will wind up in a courtroom or a prison in Tunisia or anywhere else.

Ennahda, the moderate Islamist party that prevailed in Tunisia's October elections, is studying the work of truth commissions into state abuses in other countries. "We want to convince people that there is accountability, that democracy is real," Zied Doulatly, a senior Ennahda leader, said last month.

The idea of a truth commission is in keeping with Tunisia's overall approach, Cammett says. Soon after Ben Ali's departure, Tunisians started committees to examine issues such as political reform, corruption and human rights in an attempt to set up new civil institutions in a systematic way.

The preference has always been to have the local justice system work first. International justice is supposed to be a matter of last resort, not first resort.

John Norris of the Center for American Progress

Former President Hosni Mubarak, his two sons and other co-defendants have been on trial in Cairo on murder and corruption charges since August. Their trial has been postponed because of complaints about the impartiality of Judge Ahmed Refaat.

An appeals court ruled earlier this month that Refaat can continue to preside. The trial will resume on Dec. 28.

Many Egyptians have been unhappy about the slow pace of the Mubarak trial. Some have also been troubled by the fact that thousands of activists have been either questioned by the military or tried by military tribunals in the months since Mubarak left power.

But seeing Mubarak tried domestically, rather than being handed over to an international tribunal, is a good thing, says John Norris of the Center for American Progress, who has worked on resolving conflicts in Africa for the U.N. and in other capacities.

"The preference has always been to have the local justice system work first," Norris says. "International justice is supposed to be a matter of last resort, not first resort."

The top ICC prosecutor agrees. Luis Moreno Ocampo says that Saif al-Islam Gadhafi, who was indicted by the court along with his father, the now-deceased leader Moammar Gadhafi, could be tried in Libya, so long as the trial meets ICC standards.

"In May, we requested an arrest warrant because Libyans could not do justice in Libya," Moreno Ocampo told reporters in Tripoli last month. "Now, as Libyans have decided to do justice, they could do justice and we'll help them do it — that is the system."

The ICC had issued an arrest warrant for the Gadhafis in June, but Moammar Gadhafi was killed after being captured by a mob on Oct. 20.

Moreno Ocampo said this month that there were "serious suspicions" that his death, after having been captured, may itself have been a war crime.

Nevertheless, ICC prosecutors on Wednesday rejected a request from Gadhafi's daughter Aisha to look into the matter. Instead, they intend to review Libya's own investigation into alleged war crimes, including Gadhafi's death.

But the transfer-of-power agreement that Saleh signed last month gives him immunity from prosecution.

Decisions about who to prosecute are always political — especially when it comes to heads of state, says Norris of the Center for American Progress. "The decisions of international prosecutors are no different, in certain ways, than local prosecutors," he says. "What are the politics? Will you succeed or fail?"

Politics will likely determine how much weight is given to recent investigations into human rights abuses in other Arab countries. A 500-page report issued last month by an independent commission in Bahrain found evidence of torture and other abuses by government agencies putting down protests there.

In response, the Bahraini government pledged that all those who had broken the law or ignored lawful orders would be held accountable, but some were skeptical.

In Syria, things may have progressed beyond the point where Assad is still nervous about international prosecution. It's possible that he's less afraid of being indicted, as Gadhafi was, than of suffering Gadhafi's ultimate fate.

"As time goes on, Assad is probably making a calculation that he has so much to lose he has to fight like crazy to hold on," says Cammett, the political scientist at Brown.